On the basis of a recommendation in the comments (Thanks!) and because it is totally cool, I went to a Tenebrae Office at St. Anselm held by the Benedictines on Good Friday, April 2, at 8 pm.

St. Anselm is a modern church and is in the round.  I couldn't figure out where the back was because the church is a circle.

The Tenebrae started with the antiphon "Christ the Lord suffered for us and was buried; come, let us adore Him." and then Psalm 94.

The Second Nocturn:  An Antiphon (Jonah), Psalm 59, Psalm 76, Psalm 87, and a reading from something I had never heard of, Canticle of Zechariah, (at this point the church was totally dark) Christus Factus Est, and Psalm 50.

After the concluding prayer, the strepitus was made.  The strepitus is a loud banging and symbolizes the earthquake that occurred at the death of Jesus and the sound of the stone being rolled to close the tomb.

If you recall, I went to a Tenebrae service on Sunday night at the Chapel of the Discalced Carmelites.  The Tenebrae at St. Anselm was quite different.  First off, the church was dark with only two lights and the exit signs providing illumination.  Second the monks did all of the chanting.  Essentially it wouldn't have mattered if other people would have been there or not, the monks kept on chanting.  Third, while Sunday's Tenebrae was somber, the Friday Tenebrae was even more so.

It was a beautiful service.  I would really like to go to more services held by the monks.  I even debated going to Easter Vigil there. 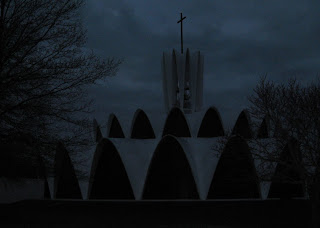 St. Anselm
It started raining just as the Tenebrae was starting. 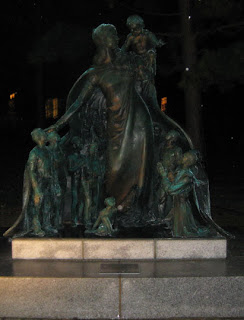 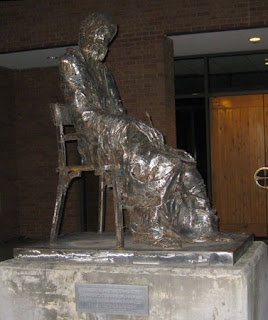 I think this is St. Benedict

Candles lit at the beginning of Tenebrae 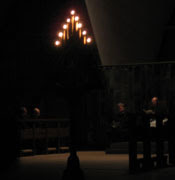 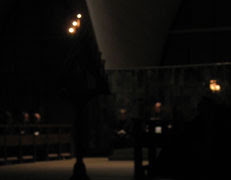 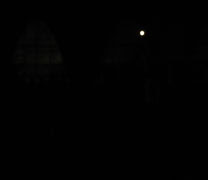 The Jesus Candle in a totally dark church.
Link:
St. Anselm Website
Pictures from Rome of the West
Posted by Tina aka Snupnjake at 10:35 PM