Good Sunday to you.  I hope you all had a good Easter.  I was in St. Louis for Easter visiting my family.

I've been moving this past week and managed to give myself heat exhaustion.  Between that and the severe weather expected today, I stayed in Little Rock.  Because of the severe weather, I decided that this morning would be the best time to visit a church in the not so middle class section of town.

I attended the 9 am Mass at St. Bartholomew in Little Rock.  It's pretty close to Central High School.  It was hard to believe that this was a church in the middle of an urban area.  It's a wood frame church similar to many churches found out in rural areas.

It's a predominately African-American parish.  Many of the members were dressed very fancy or in very fancy traditional African costume.  The Sanctuary curtains were of a kente cloth.  Father's vestments also featured kente cloth.

Before Mass, we greeted each other with "Be Blessed in the Name of the Lord."

Father wore his stole on the outside of his chasuble.  Nearly every prayer, except for the Eucharistic Prayer (He used II by the way) was adlibbed with a saying from today's Gospel:  "Jesus said to them three times, "Peace be with You."

Music was provided by the children's choir accompanied by a piano.
Opening:  He Has Done Great Things for Me.
Offertory:  Our God is Awesome
Communion:  Let Us Break Bread Together (At a funeral pace...not that it makes it any more appropriate)
Communion Meditation:  This Little Light of Mine (with Clapping!)
Closing:  was not on the board and I left (more about this)

Today was First Communion for 4 children at the parish.

Homily:
Father:  God is Good
People:  All the Time
Father:  All the Time
People:  God is Good
This is the day the Lord has made.  Other churches have no one being baptized, receiving First Communion, Confirmation, no RCIA.  We are blessed.  If you go to a Church and there are no babies crying, then that Church is dead (or you're at a 6 am Mass or all the kids have been stuffed into the "cry room" thanks to dirty looks or have gone off to Children's Liturgy).  In the Gospel, we hear Peace be with you.  In times of trouble we want someone to tell us peace, peace be with you (no...I want to hear their plans to fix it...)  The door is locked.  It is a spiritual lock keeping Jesus out.  We lock away because of fear.  Fear is a prison.  We put ourselves into prison.  The Apostles have imprisoned themselves.  They have chained themselves in the room.  They are paralyzed by fear.  Fear keeps us from letting anyone into our hearts.  Three times He said "Peace be with you"  He showed the apostles He was alive.  Imagine if Jesus appeared to us right now.  We would call 911 (uhm...I'd be like break out the Holy Water and the blessed salt.)  Jesus appears to us through others.  We should rejoice.  He appears to us if we have eyes of Faith.  We see the bread and wine as the Body and Blood of Jesus.  In the First Reading, they lived in community, redistributing things according to need.  If I had you bring all your things and redistribute them, you wouldn't come back.  Pray people of justice.  No peace.  We are selfish.  (Yes...I didn't need to buy that hammock that provided a livelihood for someone...)  We don't share what God has given us (I share my snark...) Equal distribution of goods (awww is Father a closet Communist?)  No justice no peace.  (Why am I not surprised...an interesting discussion.)

The homily was rather long.  The Offertory didn't start until 9:43.  The first Communicants brought up grapes (ok), tomatoes (uhm), bananas (uh uh) and avocados (what are crops that require hand picking and so the workers (who tend to be illegal/not native/not educated) are under paid?)

The Our Father was sung and there was hand holding across the church.  I tried to avoid it but the elderly lady was rather insistent.  There were bells at the Consecration.  The parish sits during Communion.  The first Communion kids knelt to receive Communion.  During the Communion march, random people kept patting my back.

After Communion the First Communion kids read a pledge to be pure and holy, not to drink, not to smoke, to be modest, to be pure.

After the Closing Prayer, there were speakers.  Now, I don't necessarily truck with speakers at Mass but I can understand the need for parishes to announce special events or beg for money or what have you.  I'm not thrilled with it but I tolerate it.  Today's speakers were from UAPB (University of Arkansas - Pine Bluff), a historically black university, giving the usual college spiel.  Mass was going on 1.25 hours and there were still visitors to announce.  I left when the second UAPB speaker got up.  Yeah no.  I'm not truckin with that.  For the record, I would have been annoyed had it been a Catholic school.  Why they had to speak at Mass was beyond me.  A simple announcement of we have some visitors from UAPB, please speak with them after Mass if you're interested would have been sufficient.   Meh. 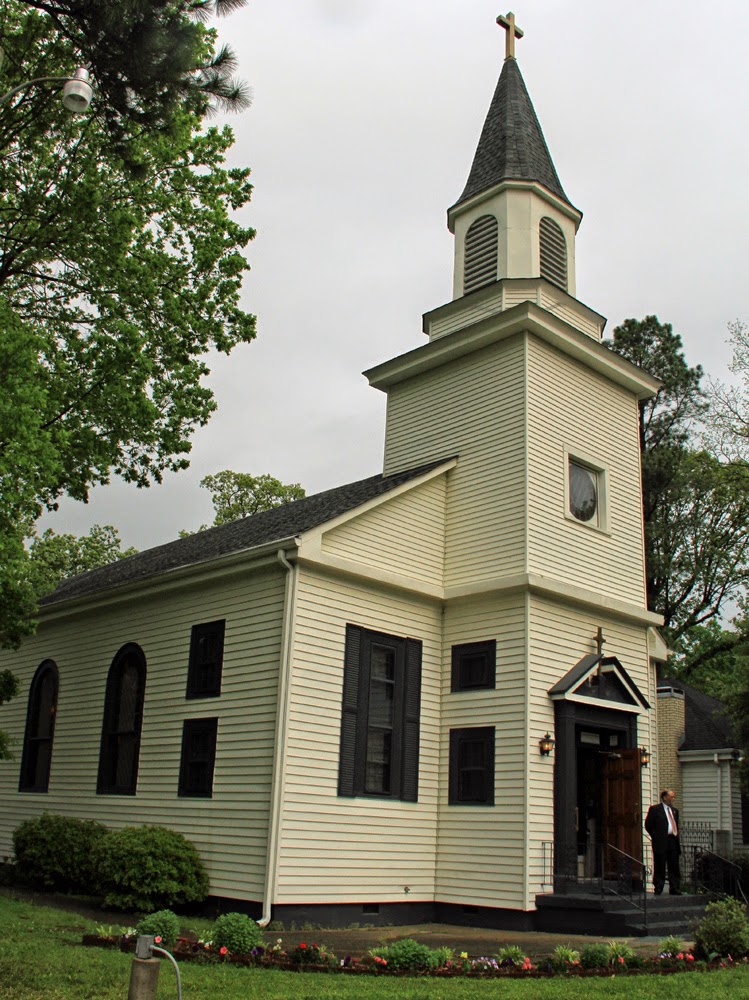 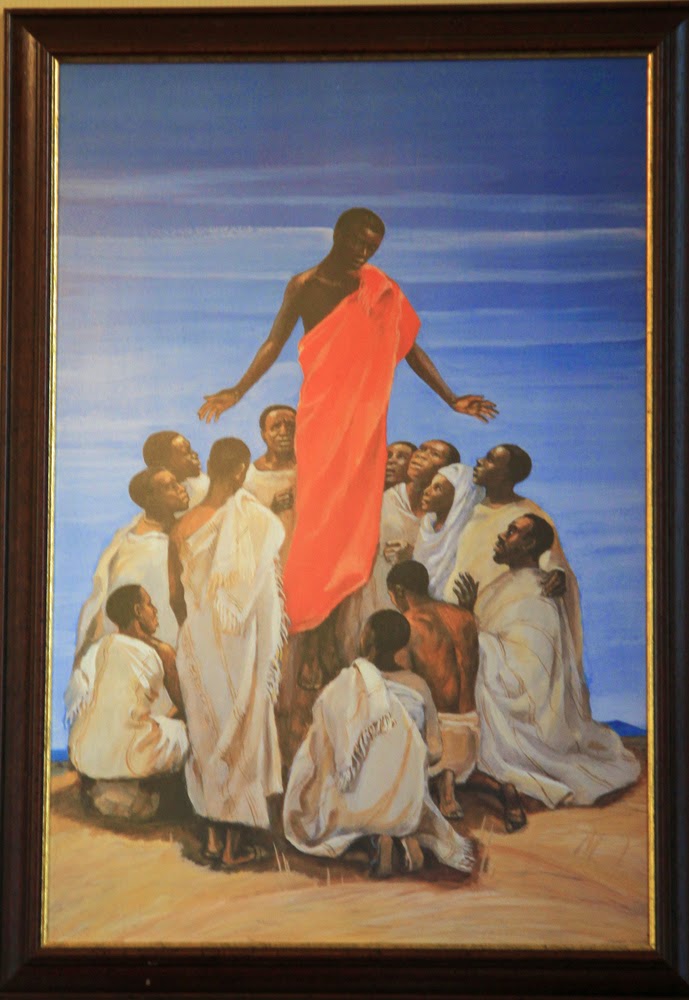 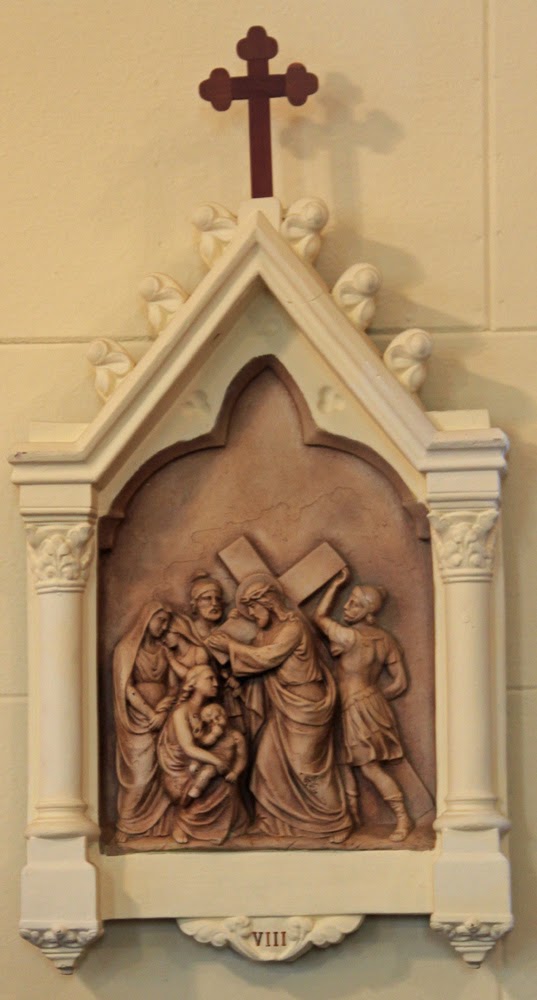 Blessed Palm Sunday to you all.

I've been trying to get my palms into any kind of shape...so untalented.

On Saturday, April 12, I attended the 5:30 Vigil at Holy Rosary in Stuttgart (I was there for the saddest German Fest ever.)

There was a procession with palms from one building to the Church.

Music was provided by an organ in the loft.
Opening: Ride On! Ride On in Majesty
Offertory: Were You There
Communion: Praise O Zion Voices Raising
Closing:  All Glory, Laud and Honor

Homily:
Jesus rode in on a donkey.  In times of war, the King rode a horse.  In times of peace, the King rode a donkey.  Jesus is the King of Peace.  In 1 and 2 Maccabees, the people wave palms at the victorious Kings.  The people sang Hosanna which means Save the King.  I encourage you to participate in the Liturgies this week.  They build on each other.  Remember God's Love for each and every one of us.

Father used Eucharistic Prayer III and there were bells.  Mass was over in an hour.... 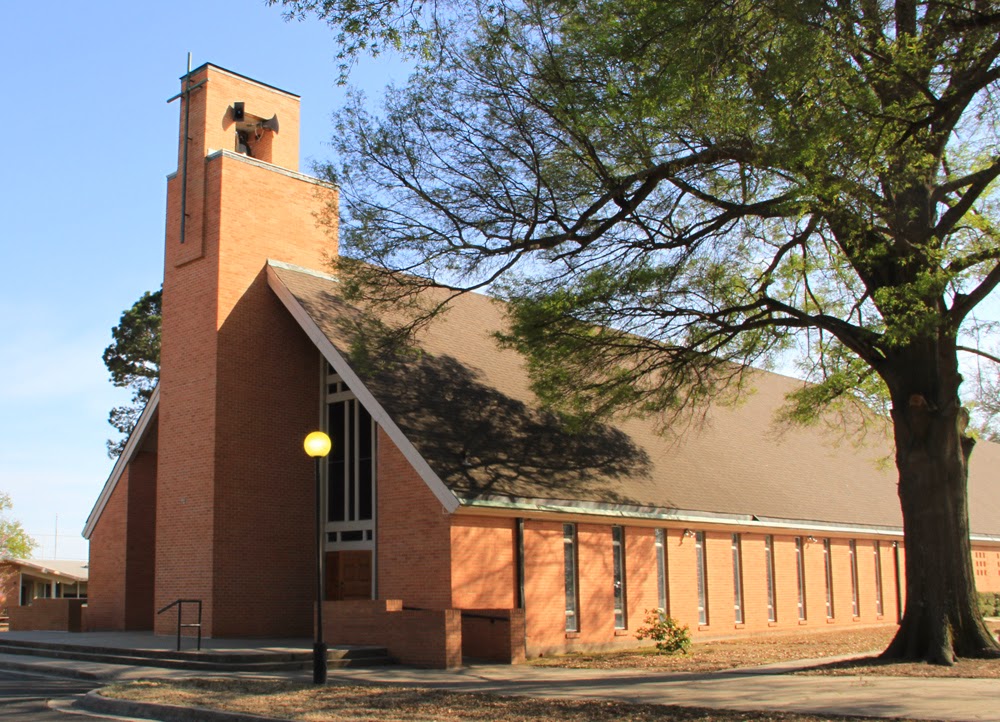 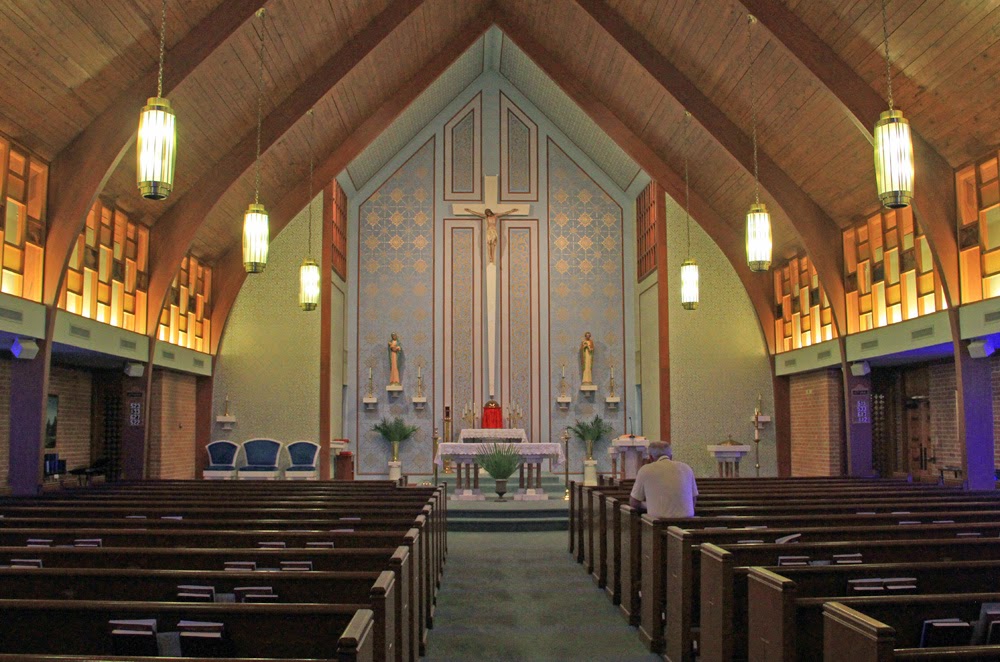 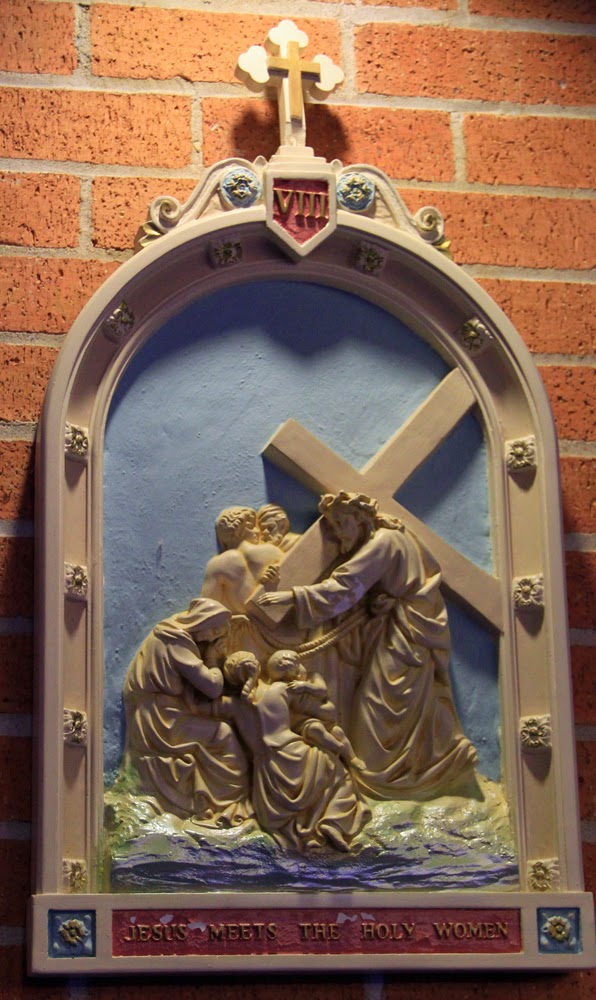 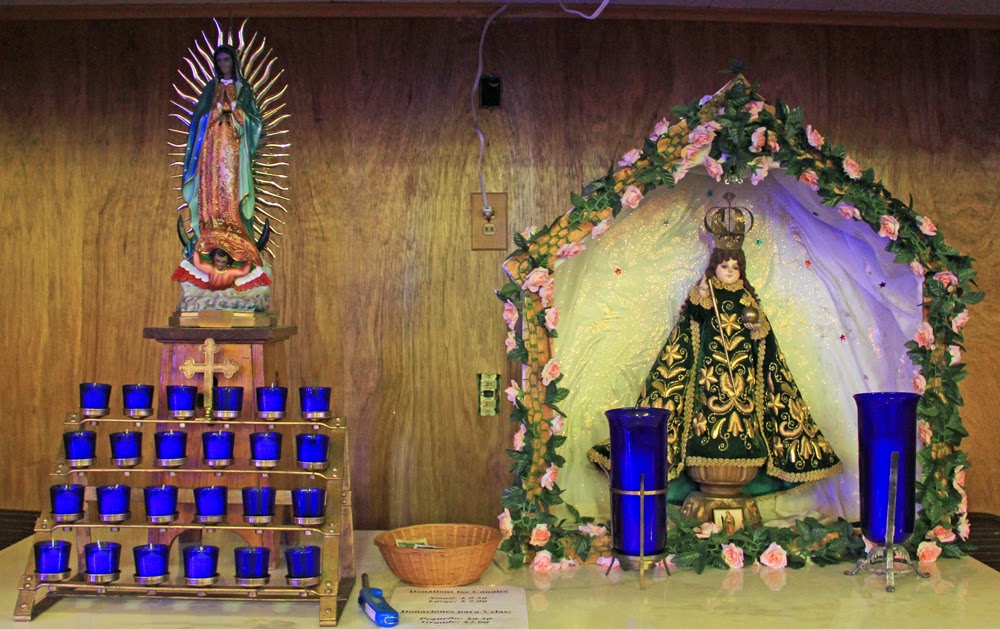 Link:
Holy Rosary
Posted by Tina aka Snupnjake at 7:05 PM No comments:

Evening!
My parents came to visit me this weekend.  Originally, I thought I was going to miss Mass but then the wheel fell off their van (while I was driving...luckily at a stop sign.)  I was able to go to Mass before the garage opened...

I attended the 9 am Mass at St. Edward which is just outside of downtown Little Rock.  I was unable to stay for the entire Mass. Mass started 5 minutes late and at 9:45 the Offertory was just beginning.

Music:
Music was provided by a choir and a very loud organ in the choir loft.
Opening: From Ashes to the Living Font
Offertory:O Breathe on Me, Breath of God
Communion:??
Closing:??

The audio was not very good.  I had a hard time understanding what was being said while in the back pew.

Homily:
There were 2 really...in one big homily....
We have this image of Martha busy in the kitchen and Mary sitting by Jesus.  Today, Martha gets a chance to show she has been paying attention (cause there's a test).  In the depth of her grief, she shows a great act of Faith that matches St. Peter and St. Thomas.  Lazarus is Faith in Action and the fruition of faith.  Death is a one way street which is why Lazarus was bound.  Lazarus' response is do what the Master says.  He is an example of people when Faith is willing.  They take risks (like skydiving!) and have confidence in God.  Do you believe in Me?  Do you trust Me?  In the 2nd Reading, St. Paul said to trust is to live and he talks about the dangers of the flesh (a homily about sex??? ooo).  He doesn't mean the body (j/k).  It comes from a Greek word that refers to orientation toward the world.  The perspective to turn in self...the self is the center of all values.  Worship of one's self (selfies!).  When we belong to Christ, He is the center our life is oriented to.  Jesus says to us "Do you trust me?"  "How much do you trust Me?"  And then the homily became a chat about parish finances...  Our support of the parish is a matter of trust in God and in the Church (I trust God with my money...not so sure about the *Church*).  We say we trust but then we put our needs first.  We don't want to do without.  We want to hold onto our resources.  How much should we return to God?  Apparently last week the Bishop gave a talkin' to about money and mentioned the Bible says we should give about 10% or our income (pre or post tax?).  4% should go to the parish.  1% should go to the Appeal.    How much income is 4%?  About 1.6 hours if you work full time (pulls out phone...starts crunching numbers...feels incredible guilt...coughs up money won at horse races....ah well...my friend didn't need any chocolate bunnies).  We have to trust.  Everything depends on God (please send chocolate bunnies...)  Prayerfully consider what God has given you.  Consider how you use those resources.  Use what you have to serve Me.  (Honestly, Father Bill at the CNC at UMSL had the best approach.  Instead of using scary things like numbers, he was more like surely you can go without McDonald's once or twice to give money to the parish..)

Then there were the Scrutinies.  I thought Scrutinies were more for adult converts...like say age 13 and older.  The three catechumens all looked to be under 13.  One looked about 10...

I suppose it didn't really count as attending Mass... 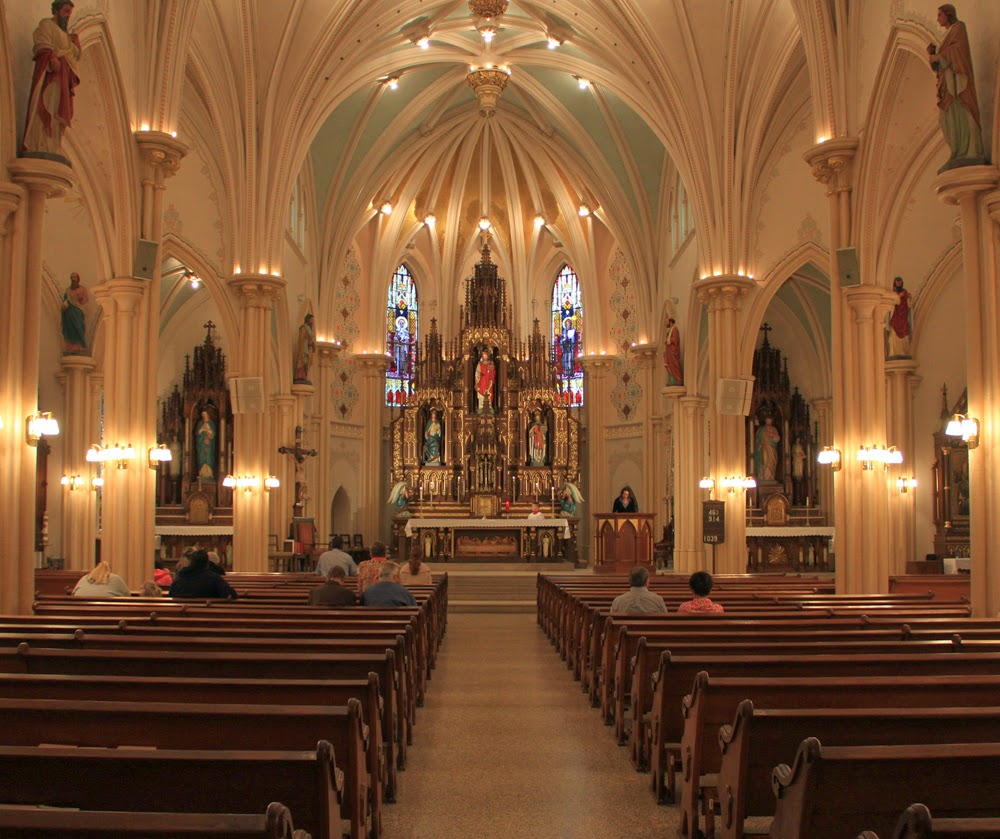 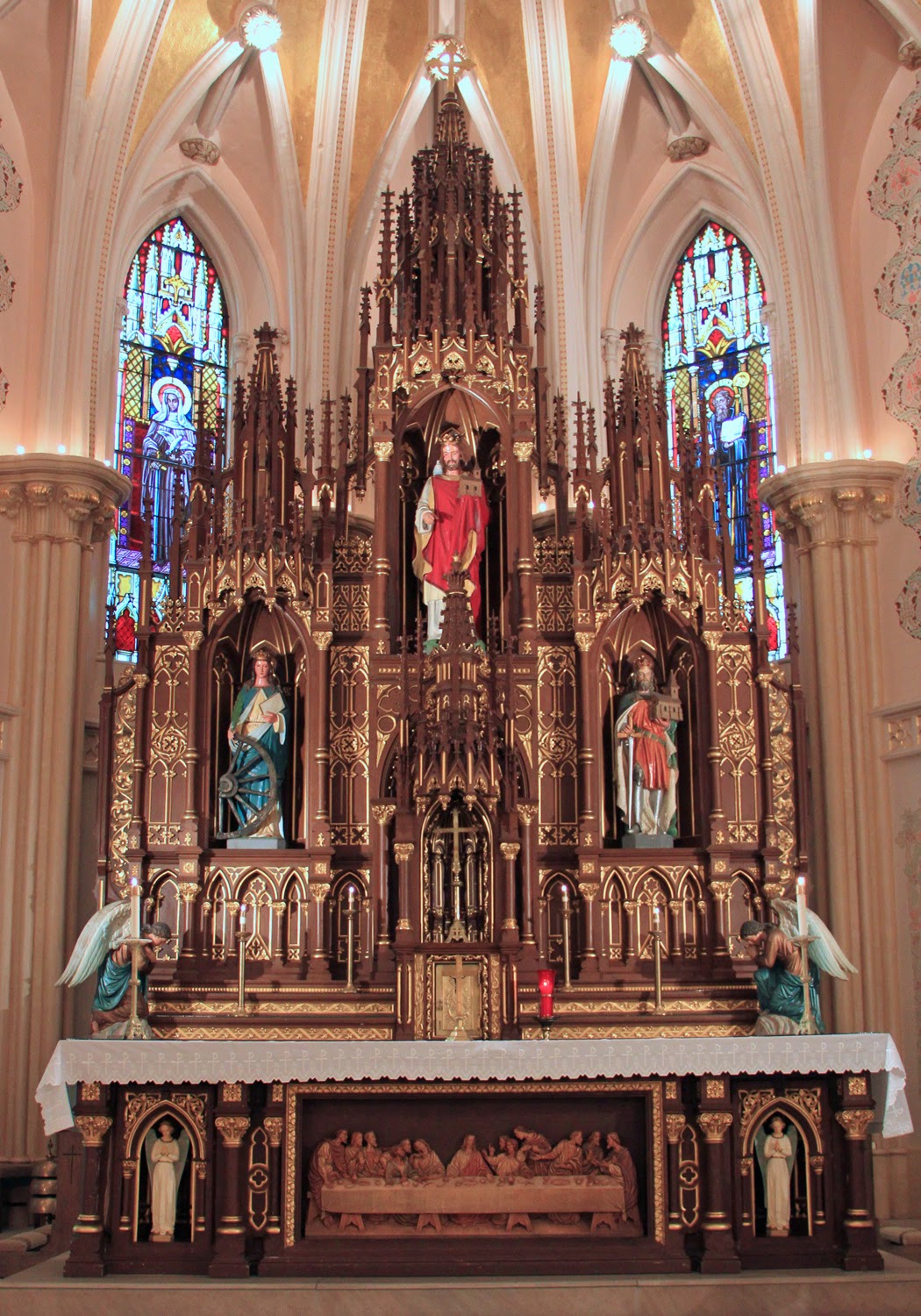 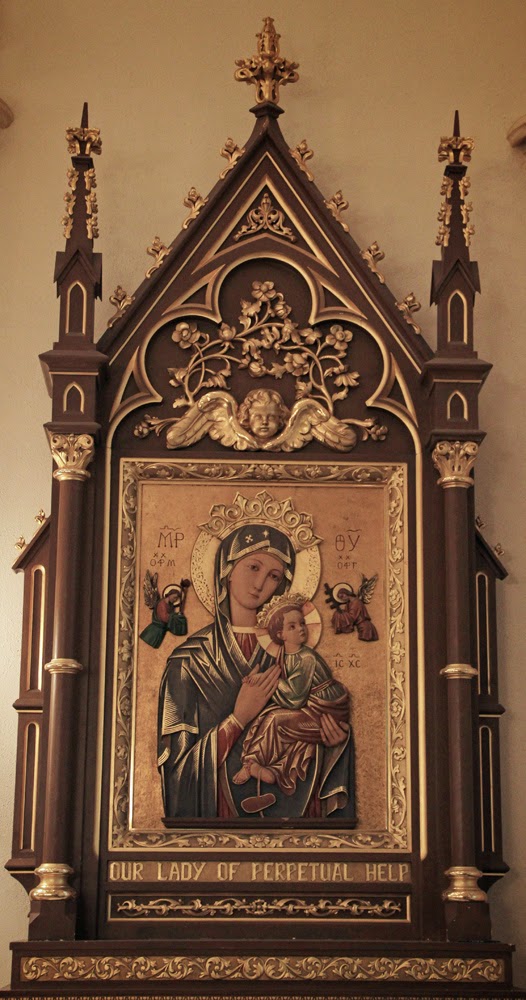 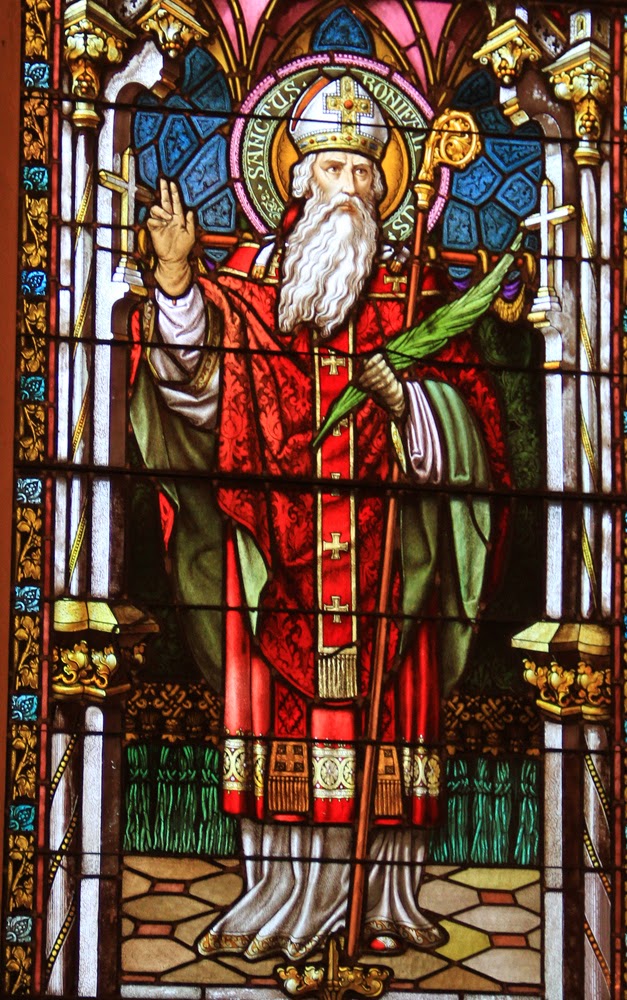 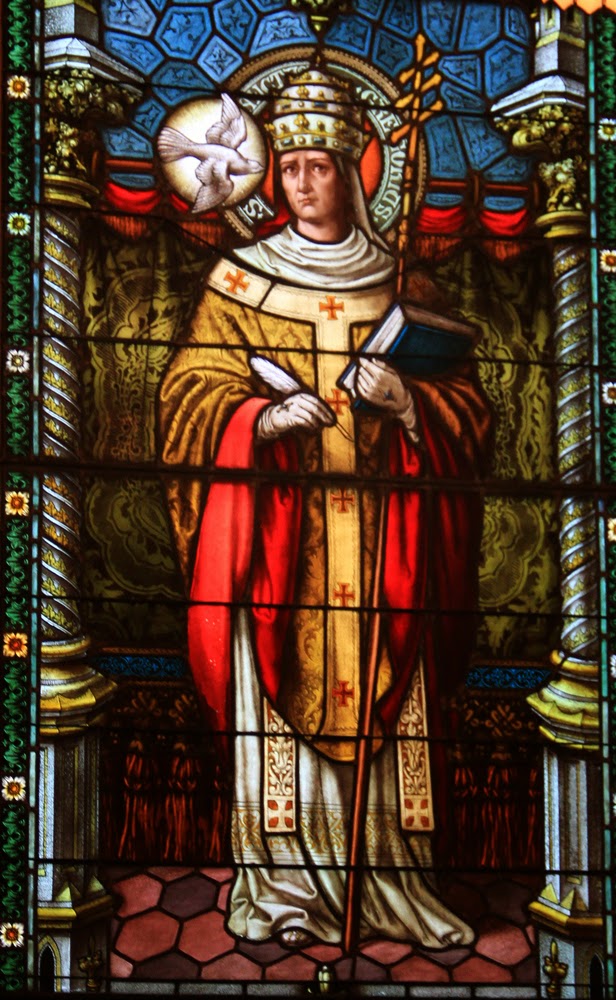 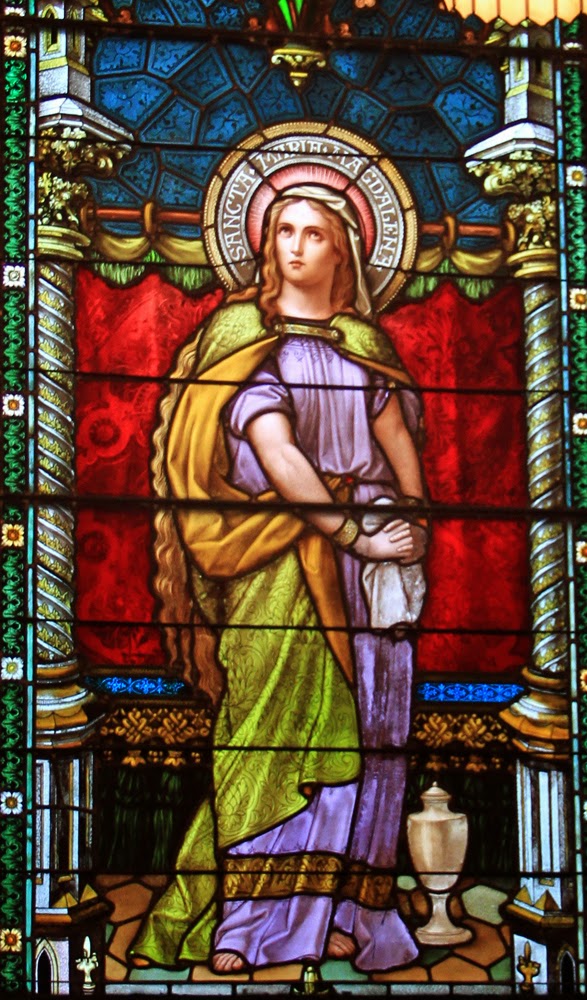 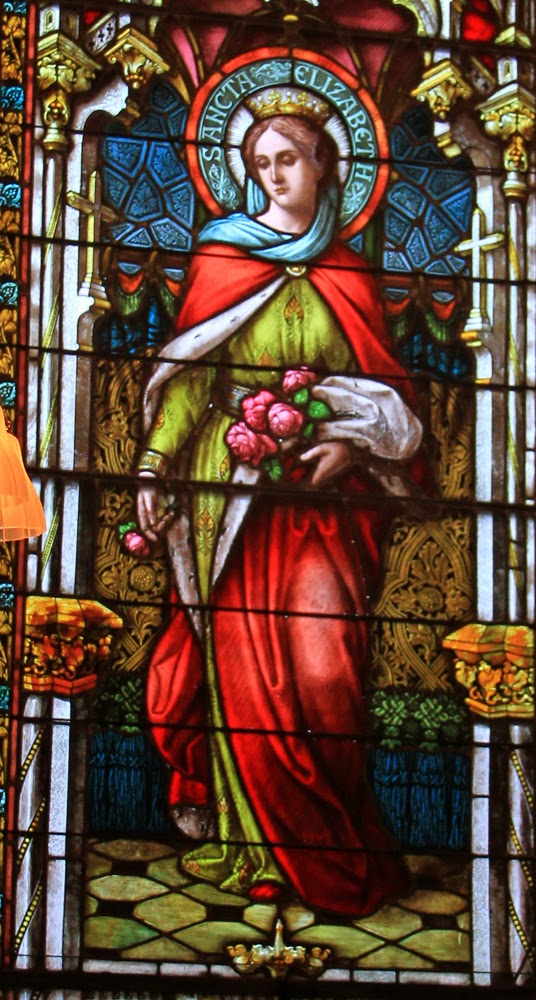 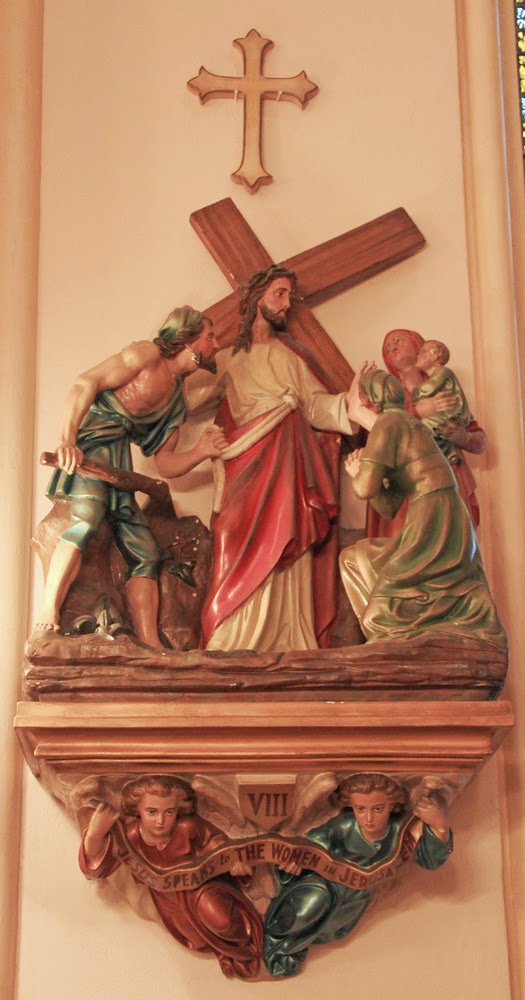