I hope everyone is having a joyful Easter!  I was really torn about where to go for Easter Mass.  Some suggested Resurrection, but that is the Vietnamese parish, and well, I thought for Easter I'd stick to English.  I finally decided to go to St. Francis Xavier, the College Church on the campus of St. Louis University which is administered by the Jesuits.  I based this decision on reading the bulletin asking for volunteers to help blow up balloons for the 10:30 am Easter Mass.  I was decidedly intrigued.

I nearly left when I saw this: 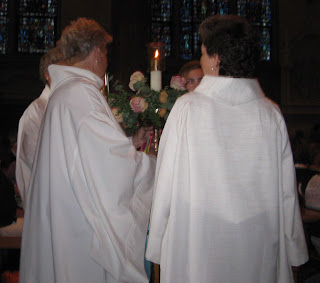 Deaconnesses. (????)
Whatever they are wearing look suspiciously like dalmatics, which is the vestment for deacons.  Why are they not wearing those alb-like robes?  I understand there is a priest shortage.  I understand that it is sometimes necessary for the laity to assist at Mass.  This is not the middle of nowhere.  This is not a mission diocese.  You mean to tell me, they couldn't dig up a spare Jesuit (or Dominican as they live in the same building across the street from the church no less) to assist at Mass? What does this say about the importance of a properly celebrated Mass? (It's not apparently important..)  Now, last summer and the summer before that, I would somewhat regularly attended the 4:30 pm Sunday Mass.  No deaconnesses at that Mass.... 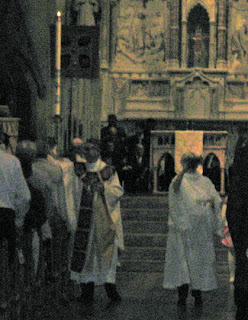 Sprinkling Rite in which the Deaconness helped.
This just seems wrong.  I'm not up and up on all the latest liturgical innovations and rules but I have been Catholic for quite some time now this just seems *wrong*.  Now, it may very well be allowed (I doubt it) and there maybe a case for pastoral necessity (again..no spare Jesuits?) but I'm not ok with this.  Especially given that many people come to Easter Mass, some of them not Catholic and some Catholics badly taught or ignorant of their Faith.  If I was an outsider, I would say this looks like the rules of about the all male priesthood are being relaxed and changed.  Until I started this blog, I didn't know that the deacon wore a dalmatic; I didn't even know what one was.  Previously if I had seen a man on the altar wearing the dalmatic, I would have thought it was a new style of chasuble and it was simply a concelebrating priest.  Especially if that man was doing things like preparing the altar for the liturgy.  What does this look to someone not of the Household of the Faith?  It looks like the Roman Catholic Church is on the path to female priests, which I believe the Pope John Paul II said would never ever happen.  The other problem I have with this is that it *normalizes* the behavior and gets people used to it.  This is how you make large radical changes.  You can't make large radical changes in one fell swoop without lots of outcry (something that should have been noted when the Mass changed in 1973...) You start with small steps, the steps being so small and inconsequential, that a reasonable person looks ridiculous objecting to them.  Each little step is just slightly more radical than the step before, but it is slow going.  When you look at the whole process, you have gradually moved further from the norm and the people haven't realized it and are now accepting what they would have objected to in the first place.
Update:  I have since been informed that the white flowy cloth shirt/dress things the women are wearing are monastic albs.  Because this is a monastary, that's the first thing that came to my mind.  Right. I posit that the average Catholic would not know the difference.  Furthermore, the average nonCatholic wouldn't either.  I certainly didn't and I've been doing research and stuff.  I know if my mother were to look at these pictures, she would say the women are wearing a chasuble.  Which I think illustrates my point.
Update 2: While editing this post again, my sister (she's Catholic and went to Catholic School too) walked in.  I asked her what the women were wearing.  She said "Something they shouldn't be".  She's like they are wearing the priest thing.  The prosecution rests.
After talking with Mark, we decided St. Francis Xavier was larger than St. Francis de Sales, which holds ~1200.  However, St. Francis Xavier has pulled out pews in the back and on the sides and has replaced them with chairs (with no kneelers FYI).  We guess that the Church holds in the neighborhood of 1500 people.  I'd have to venture there were ~1500-1800 people at this Mass.  I didn't see the sides so I'm not sure.  I can tell you the back was packed and people were standing up the sides.  It was insane!
The music was lovely with a brass ensemble.  There is no organ which is a shame in such a large Gothic church.
Entrance:  All Shall Be Well
Gloria:  Mass of Light
Sprinkling Rite:  Water of Life
Preparation of Gifts:  Instrumental by St. Louis Brass Ensemble
Mass Setting:  Mass of Creation (I'm starting to wonder if that is all there is....)
Communion:  Now We Remain and O God Beyond All Praising
Recessional:  Jesus Christ is Risen Today
Postlude:  Hallelujah Chorus (you can sing that outside of Christmas??!!??)
The children in attendance were given ribbons so that they could process with Father and wave them.  They stood on the altar waving the ribbons through the Gloria.  As an aside, baptismal fonts that are a foot high and full of water do not mix well with lots of 5 year olds with ribbons milling around it...
No incense at this Mass.  They also skipped the Paschal Sequence which is a shame.  Shockingly, the Intentions were appropriate.  We actually first prayed for the Church.  I thought it was going to be the usual social justice set of intentions.  Oh and Father used Eucharistic Prayer 1.
Father's homily started out how in this Mass we don't start with needing God.  We are already here.  He then encouraged us to read the 4 Gospel accounts of the Resurrection and notice how each account is slightly different as they were written for different audience, but they all feature the empty tomb.  Father then goes on to talk abut Mary Magdalen and who she was and was not.  The homily then switched gears to how the Risen Christ comes to give peace and a job to do.  We need to ask ourselves where Jesus is leading me and where can I discover Jesus alive?  How, where and with whom should I share the Good News.  Peace is a gift you can't hoard. 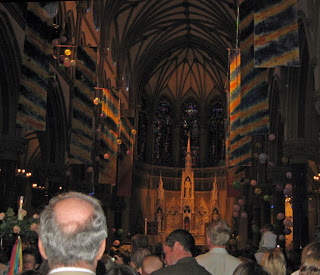 Balloons falling from the upper walkway as the procession winds down the center aisle.
The highlight of this Mass for most people would be the pouring of balloons from the upper walkway as the priest processes out.  I did talk to a parishoner about why this was done.  It's done to illustrate how heaven and the Resurrection are one big party.  What do you have at parties?  Balloons.  Also, to keep people in the pews until the end.  Finally, it is to illustrate how family and child centered the parish is and how important religious education is for this parish and how they have excellent child religious formation.  Unfortunately I will have to disagree.  I went to Catholic school for 12 years and no balloons were involved in the Church and I have to think that I got an excellent religious formation.  I think Sister Mary Anne would have had a heart attack if balloons were in the Church... As an aside, wouldn't a good way to form children in their Faith be to have them, oh, I don't know, learn to serve and serve Mass?  I know learning to serve I learned much more than I did in class.
Pictures (Note:  St. Francis Xavier was a madhouse and I did the best I could...): 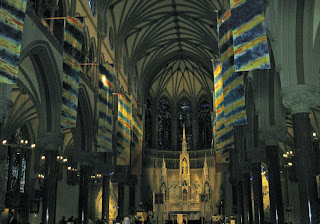 View From the Back Pew!
Update:  The banners are splatter painted rays of the sun.
You can see the Sun in the first pair nearest the altar.
Oh and there was holographic ribbons hanging from the poles too.
Pretty sparklies twirling in the air currents....

Close Up of High Altar 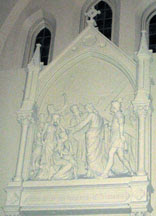 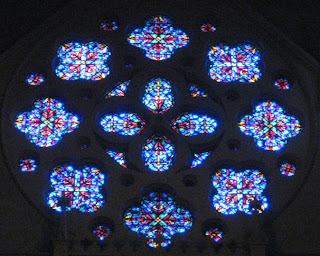 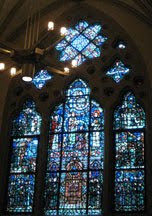 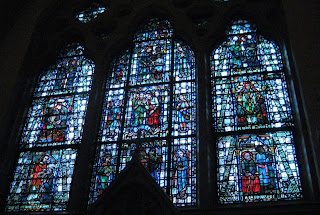 Window
The windows at St. Francis Xavier are very intricate.  They display tiny little scenes of different things.
Many of the windows depict the work Jesuits do.
I'd have to say the overall theme of the stained glass windows is
"Jesuits are Awesome" 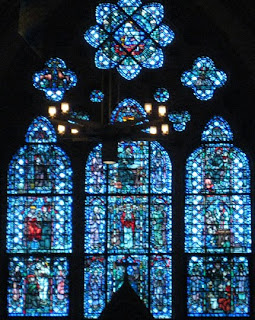 Odd Window Out!
Links:
St. Francis Xavier, College Church Website
Close-Up of two windows taken by me.
Pictures from Rome of the West (takes you to his pictures on Flickr)
Posted by Tina aka Snupnjake at 12:29 PM