Hope everyone is having a good start to Holy Week.  I really really wanted to go the Tenebrae service at the Cathedral on Holy Thursday.  I hear it is totally awesome and I had never heard of it before.  However, I plan to go to the Chrism Mass in the morning (will be wearing a blue polo...) and as much as I love the Cathedral, 3 services in one day, all of them long, is not going to get through every church in the Archdiocese.  I was then trying to find the earliest and closest Holy Thursday Mass to the Cathedral so I could make it to Tenebrae at 9 pm.  It seemed a rather unrealistic goal.  Lucky me, I was flipping through the St. Louis Review looking for my next pancake fix, when I saw that the Discalced Carmelites were having a Tenebrae service on Palm Sunday!

Tenebrae basically means "darkness".  It is a service or song of mourning.  The Church is mourning Her betrayed, crucified, or buried (depending on the day) Bridegroom Jesus Christ.  There are readings, reflections and psalms.  The psalms are the the more mournful and sorrowful ones.

The night started off with a Rosary.  We prayed the entire Sorrowful Mysteries.  I'm almost positive I haven't said a full round of the Rosary since 8th grade.  We knelt the entire time.  I wanted to sit at some point but seeing elderly nuns tough it out drove me to keep kneeling.  After every decade, we said O Mary Conceived without Sin, Pray for Us who Have Recourse Thee" and "O My Sweet Jesus, blank blank pray for us Sinners who fear burning in hell and those souls who need your intercession" or something like that.  I hadn't heard that exclamation before but by the 5th recitation I had it.  As you can see, less than 4 hours later it's gone.  Then we prayed for Bishops, Priests, Deacons and Seminarians (hopes my favorite seminarians are reading this!)  and an increase in vocations to the priesthood and consecrated life.  Next came Benediction.  Some of the hymns (and prayers) were in Latin.  I recognized Tantum Ergo.  Benediction ended with O Sacred Head Surrounded.

If ever you go to a liturgy or service and don't know what to do, do whatever nuns in habits are doing ;)

Next came the Tenebrae.  Almost the entire service was chanted by the Crux Ave Choir and they were totally awesome.  The choir would chant one (odd) verse of the psalm and then the congregation chanted the next verse (even).  I was worried because I don't know much about chant I wouldn't be able to figure it out and chant along.  The basic melody was given in the booklets and the words that you went up or down on were bolded.  After going through one psalm, I had the hang of it.  So for you who are worried that chant is hard, I didn't think it was any harder than regular music.  Actually it was easier in way.  Now I'm sure it is much harder to do melodies and stuff like the choir did, but for your basic Sunday Mass, it wouldn't be too difficult.  It might be better for people too, especially us poor altos and basses.

The service went as follows: 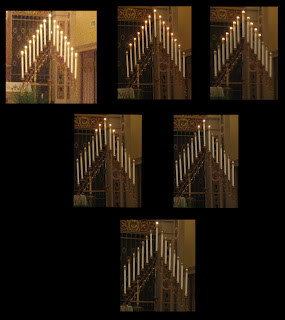 After every psalm and canticle, a candle was extinguished.  This represents people leaving or abandoning Jesus.  The top candle on the candle holder (hearse) is called the Jesus candle.  It is never extinguished, but it does go into hiding.

I really liked this service!

St. Michael the Archangel
His sword is gold...so it burns in the sun...
like a sword of fire! 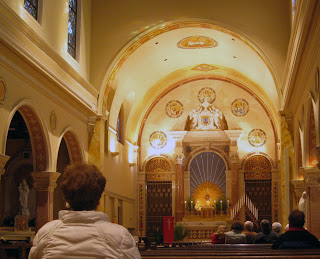 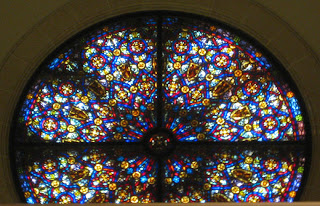 Side window
All of the side windows were similar
with symbols in them. 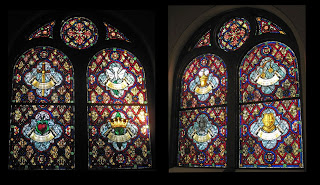 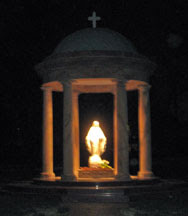 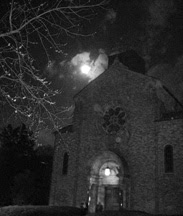 The Chapel of the Precious Blood 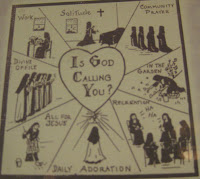 Recruitment Poster
Links:
Website of the St. Louis Discalced Carmelites
Pictures and here from Rome of the West
Posted by Tina aka Snupnjake at 12:42 AM