When I walked into Mass, the Rosary was being recited and there was a line for Confession. I noticed a chalice veil and a handful of women with their heads veiled.  I also saw a female altar server in cassock and surplice.

Father used the full Penitential Rite.  This was the first Sunday Mass I have been to in a really long long time that the Responsorial Psalm was not sung or chanted.

The homily was about following Christ.  Father kept repeating two phrases:
1.  Are you as good as you want to be?
2.  What does God want you to do today?
God may want you to do something that requires changing your behavior in some way.  What does it mean to be a follower of Christ?  Father also brought in Confirmation, and how, in Confirmation, you receive the Gifts of the Holy Spirit.  These gifts make us strong enough to follow Christ.

The intentions were forgiveness orientated.

Father used Eucharistic Prayer III and there were bells at the Consecration.  The memorial acclamation was different.  It was the one that starts with "Keep in mind..." which I haven't heard in a very long time.

Over all the parish was more reverent than other parishes and the majority of people were appropriately dressed.  It's interesting that during Communion, some elderly men started having a conversation about the 20 inning baseball game and people kept turning around to shoot them disapproving looks.  One of the ushers even got up to attempt to halt the conversation.

St. Barnabas the Apostle
He's holding the Gospel of Matthew 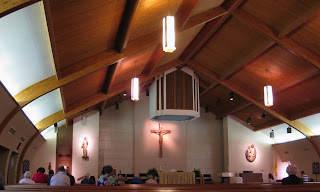 View From the Back Pew!
The Tabernacle is in front of the guy with the white shirt on the left.
It's an upside down boat.  Seriously.
Why? 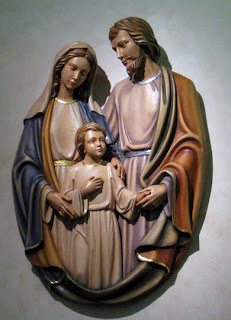 The Holy Family
I like this.
It actually looks like they are a family instead of 3 strangers,
standing near each other. 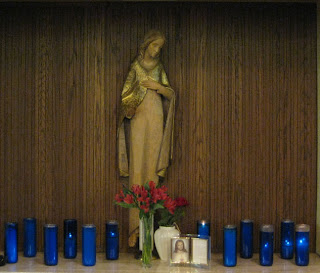 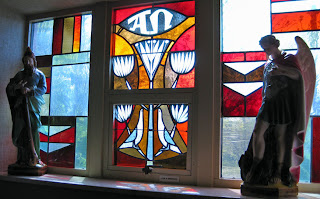 Vine and Branches Window
St. Jude on the left
St. Michael the Archangel on right.
Each window had a little plaque to tell you what the window
represented.  Because without it, I was clueless. 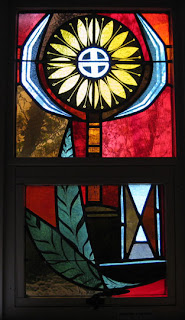 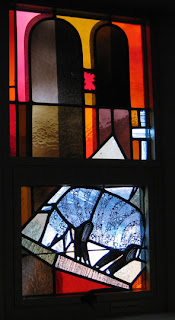 The sacrificial aardvark.
Or the Paschal Mystery if you read the plaque.
Links:
St. Barnabas the Apostle Website
Posted by Tina aka Snupnjake at 11:33 PM