Hello again.  The Holy Week Marathon continues!
I hope everyone had a spiritually satisfying Holy Thursday!

For Holy Thursday, the Mass of the Lord's Supper, on April 1, 2010, I attended St. Gerard Majella in Kirkwood.

St. Gerard Majella is a modern church with the pews fanning out around the altar.  Mass was packed with a variety of ages.

I arrived really early to make sure I got pictures of the stained glass windows while it was light out and so heard the choir practicing.  They were really good.  I also met and spoke with a fan!

Music:
Opening:  Glory in the Cross
Washing of Feet:  As I Have Done For You
Offertory:  Behold the Cross
Communion:  Jesus, Remember Me and Kyrie
Procession of Blessed Sacrament:  Pange Lingua Gloriosi

Both of the priests for the parish weren't feeling well.  The celebrant was actually loosing his voice and it cracked during the opening prayer.  What a horrible time to lose his voice.  He's got a long weekend ahead.

Father's homily was about the foci of today's Mass:  Christ anticipating our needs by his actions.  He gives us an example of service and He lacked fear.  We anticipate the Banquet of the Kingdom.  What brings us to Mass tonight is Faith.  It is about service, sacrifice and trust.

After the homily came the Washing of the Feet.  Initially 5 teenage boys came up to have their feet washed.  Then Father invited anyone who wanted to, to come up and have their feet washed, with 2 more boys, 2 girls and a mom coming forward.  I thought this was odd, because usually the people are picked out in advance.  This is a good practice so that 1.  everyone has reasonably clean feet and 2.  so that the lucky victims can wear shoes that are easy on and off.  My First Communion was on Holy Thursday and one of my classmates was chosen to have her feet washed.  She wore tights.  I also thought it was odd because I thought you were supposed to have 12 people, like there were 12 Apostles.  I've been informed that it is only customary and not required.  Technically, women are not supposed to be included in the feet washing activity.  If you'd like to know more about this, see Fr. Z's website.

One thing that was missing that some parishes do is to present the new Sacred Oils that were blessed at the Cathedral at this Mass. 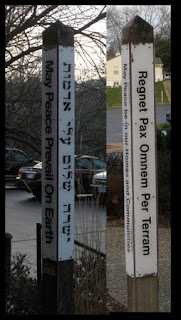 Peace Stick?
I have no idea.. 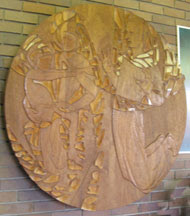 St. Gerard Majella
It's thick glass on the wood carving. 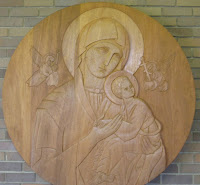 View from the Back Pew!! 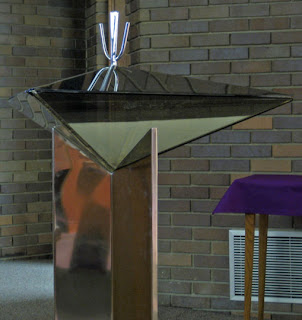 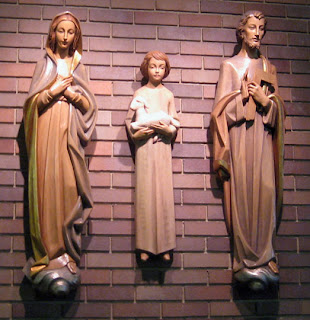 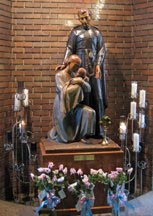 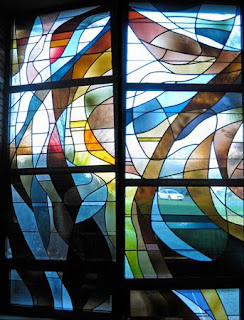 There were 8 windows, each with a Beatitude written on them. 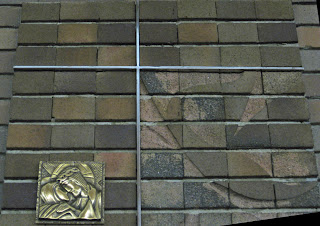 The Eighth Station:  Jesus Meets the Women of Jerusalem 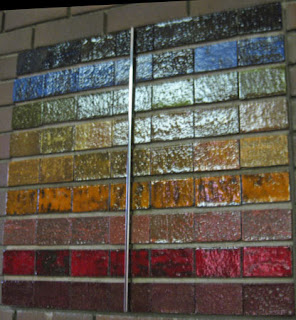 I'm hoping this is supposed to represent the Resurrection...
Links:
St. Gerard Majella Website
Posted by Tina aka Snupnjake at 11:25 PM