For the Holy Saturday, Easter Vigil Mass, I attended Christ, Prince of Peace (C-POP) in Manchester.

C-POP is a modern Church, with the interior being a cross between a traditional cross and fan shape.  There are only two stained glass windows visible in the nave of the church, making it excellent for visiting at night.  I actually missed the one above the Baptismal Font until the end of Mass because it was a good 15 feet above my head.

Surprisingly, Mass wasn't very crowded, with the Church being about 60-75% full.  Granted I couldn't see the other side of the church from the corner I camped out in, but I had a 5 pew buffer zone...

The Easter Vigil is one of the most important, if not the most important liturgy of the liturgical year.  The liturgy starts in darkness and ends in light.  Fire is blessed and the candles are relit.  Water is blessed.  New Catholics are brought into the Church this night.  There are 7(!) readings (and they aren't short!) from the Old Testament which tell the history of our salvation.  There are responsorial psalms for each reading.  There is also an epistle and a Gospel.   It is also the longest liturgy with the liturgy at C-POP lasting 2 hours and 39 minutes.

The night starts with a fire:

From this fire, the Easter Candle is lit:

I was really impressed.  Father sang the Exultet and Eucharistic Prayer III as well as many of the prayers.  I was rather puzzled why Father was only wearing a stole for the first part of the Mass, but C-POP does full immersion baptism, and Father has to get in the font with the person to be baptized...
I will have to say I was surprised by the Gloria and the Mass Setting used.  The Gloria was by Judy Hylton and seemed really somber.  Yes it was easy to sing, but to me, it seemed really somber given the occasion.  I know there are more joyous settings...  The Mass setting was the Mass of Creation.  Again I was really surprised because I know there are Memorial Acclimations and Amens with Alleluias worked into them.  Alleluia has been verboten in the Mass since February 17th, I would think we'd want to sing it as much as possible.  I'm not trying to be difficult, I just seem to remember singing Alleluia as much as possible in the early days of the Easter Season.
Instead of Father going around and sprinkling everyone for the sprinkling rite, we all processed to the Baptismal Font to bless ourselves while singing "Save Us O God, Wash Away Our Sin."  I thought this was rather odd, but while we where doing this, Father dried off and got properly vested for Mass.
For the Preparation of the Gifts, the choir sang "He Never Failed Me Yet" with the congregation eventually joining in clapping.  While this was happening, the newly initiated into the Church prepared the altar.
The Communion Song was "Ye Sons and Daughter" and "O How Glorious"
The closing song was "Jesus Christ is Risen Today"
Father's homily started with how the three women, who were held in the highest regard and the most loyal went to the tomb, which was odd because Orthodox Jews don't touch a body once buried and who was going to move the stone?  It was something to keep them busy, to help them cope with their grief.  The tomb represents sin, brokenness, chaos, etc with the Gospel story illustrating that nothing is greater than the love of God, not even death.  We are asked to believe.  As Father reflected on the Gospel, 4 adjectives (puzzlement, terror, disbelieving, amazement) stood out to him.  We all encounter these adjectives as we live out our discipleship.  God's love is greater than the tomb.
This is a beautiful liturgy that every Catholic should experience at least once. 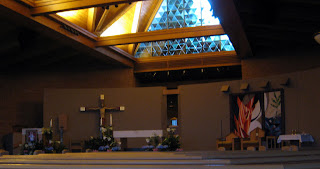 View from a Back Pew!
I think the Adoration Chapel is behind the wall. 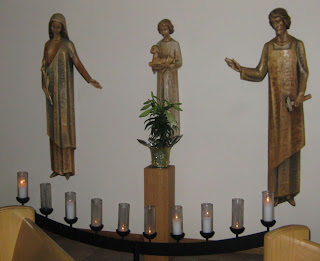 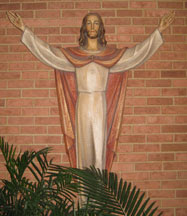 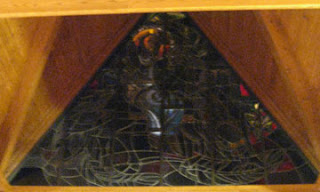 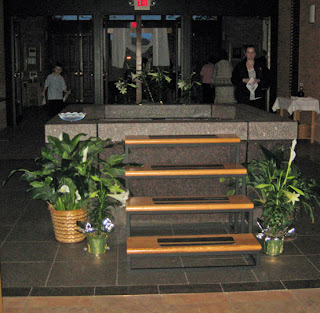 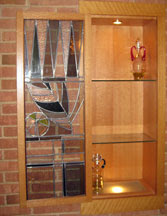 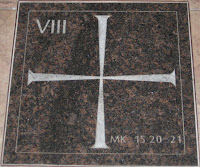 The Eighth Station
The Stations of the Cross are embedded into the floor and wind around the Church.
It took me awhile to find #8..

Link:
Christ, Prince of Peace Website (It does talk about the Church and the artwork)
Exterior Shot by Me.
Posted by Tina aka Snupnjake at 11:36 PM