Hello all!
Did you know that I'm 1/4 Italian?  Yup!  Unfortunately my Italian grandfather died before I was born, so I don't know very much about Italian traditions or Catholic Italian traditions.  Apparently, St. Joseph and his feast day are really big in Italy.

Today (3/21) St. Ambrose, the Italian parish, hosted a festival of sorts in honor of St. Joseph in the school cafeteria.  There were lots of yummy baked goods and food.  The highlight was a Mass in Italian for the Feast of St. Joseph.  Everything but the homily and the intentions was in Italian (or Latin as Mark informs me).  The Mass parts were chanted in Latin.  Let me just say that everyone spoke really fast in Italian.

It was pretty awesome.  There were close to 200 people there.  Most of them were my parents age or older.  It would be sad to see this tradition disappear.

Father's homily spoke to the tradition of St. Joseph.  Apparently, St. Joseph Altars used to be set up by orphans, as St. Joseph is the patron Saint of Orphans and they used it be in homes.  The tradition started when there was a famine in Sicily and the people prayed to St. Joseph.  Father wasn't sure why they prayed to St. Joseph, as he's not the patron Saint of rain.  My guess is that it's because St. Joseph was a Father and a provider.  Father then talked about how the tradition evolved to what it is today.  He also talked about the St. Joseph statue coming from an old Italian parish downtown that was razed for the interstate.  It is important to keep traditions and to keep the Faith. 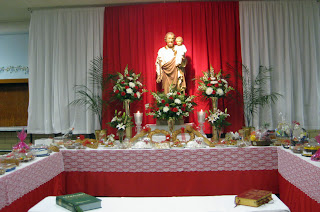 St. Joseph Altar
This was blessed by Archbishop Carlson at an earlier Mass.
I was busy eating pancakes... 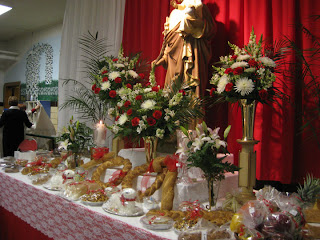 A donated Cake.
Monsignor mentioned that by baking and donating cakes,
the baker would receive the intercession of St. Joseph.

Various banners were hung around the Cafeteria.
Joseph most obedient was another.
Links:
St. Ambrose bulletin
Picture from Rome of the West
Info about the St. Joseph Table tradition
Posted by Tina aka Snupnjake at 10:57 PM