Happy Palm aka Passion Sunday (It is why Father wore red today)!  Did everyone go to Church and get their palms?  Have you tried to turn your palms into nifty things like crosses?

This morning I went to St. Margaret Mary Alacoque (St. MMA) for Palm Sunday (3/28) for the 11:30 am Mass.  It wasn't clear on their website, but the 11:30 am Mass is the Youth Mass, with special seating up front for teenagers.

St. MMA is a modern church in the shape of a semi-circle.  The back pews are raised.  For once I could see the altar from the back pew!  Mass was packed to standing room only.  The mother next to me was surprised that Mass was so crowded...I told her it is free Palm day!

The music was accompanied by a band with piano.
Mass Setting:  Mass of Creation
Procession with Palms:  Hosanna by Baloche and Brown
Offertory:  Open the Eyes of My Heart
Communion:  Hosanna by Fraser and This is Our Lamb
Closing:  Silence...as in they wanted us to leave the Church silently.

Again, I have to ask, are there no Catholic pop songs?  For some reason, I can't wrap my mind around hearing the same songs on the Christian station on Sirius XM during Mass.  Also, I question the wisdom of a "silent" end to Mass.  I know that is the standard on Holy Thursday and Good Friday, but I have to wonder if it is realistic.  One because there are many activities occurring in the narthex, when the ushers open the doors to facilitate the rush to the parking lot, the noise comes into the nave.  Secondly, no one gets being quiet in Church anymore.  Heaven forbid you try to pray as it is so loud.

Because it was cold, windy and pouring, a Procession wasn't possible.  It's also not realistic to process from the narthex when you have 600+ people at a Mass (They don't all fit!).  I'm not 100% sure if the palms were blessed at this Mass.  Since St. MMA has 5 Mass every weekend (This was Mass 5.), they could have been blessed at one of the earlier Masses.  It is possible I missed it too, because it took me forever to find Father in the packed Church.

The homily today was excellent.  Father explained the origin of palms.  The Jewish people waved palms to indicate that the Messiah was coming and later evolved to nationalistic tones.  Hosannah means "Lord Save Us Now".  The Jews wanted a different Messiah, perhaps one to throw out the Romans, instead of the one they got.  Father then asked if we were willing to accept the crucified Jesus; if we were going to take up the Cross.  It was the way of Christ and it is the way for us.  Christ came not to make a perfect world, but to make us perfect.  People expect the Church to be perfect, but it isn't.  It is filled with sinners and is imperfect.  Father ended with a quote from Our Lady of Lourdes to St. Bernadette:  "I can't promise you happiness here, but in the life to come."

Father used Eucharistic Prayer II with bells being rung at the Consecration.  Many people held hands during the Our Father.  What is odd is that people will hold hands at the Our Father but will not shake hands at the Sign of Peace. 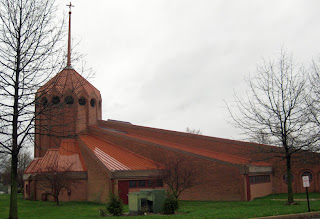 Pope John Paul II and Our Lady of Guadalupe 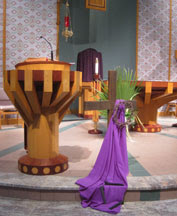 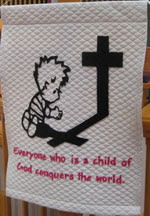 Mary and Joseph
Statues are from St. Boniface
I recognized Mary immediately.
I think the original statues are in the nave.

Close Up of The Eighth Station:
Jesus Meets the Women 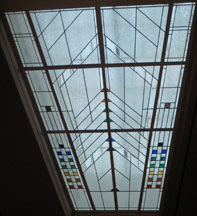 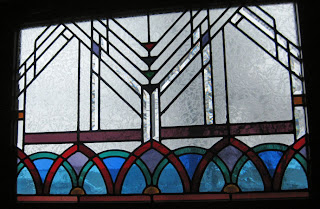 Holy Family
This and the next 2 windows were in the Adoration Chapel
Both the windows below are surrounded by the same circle of stained glass. 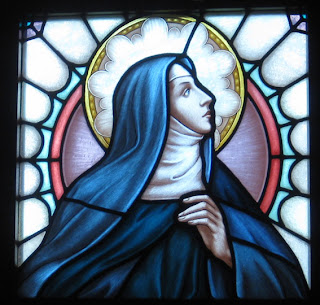 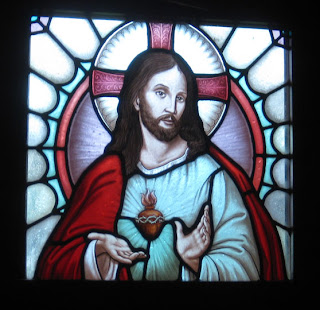