Hello all.  Welcome to a special edition of View From the Back Pew.  I've been meaning to go to real Stations of the Cross, but am having a hard time with logistics.

However, St. Louis University (SLU), happens to have a Museum of Contemporary Religious Art (MOCRA).  The MOCRA used to be the Fusz Chapel for Jesuit scholastics studying at SLU.

Spire outside MOCRA
The original mosaic on the Sanctuary wall is still there but blocked by a large contemporary piece of art.  The stained glass windows are all still in the chapel.  The upper windows which display episodes from the Hebrew Scriptures and their corresponding parts in the New Testament are covered by heavy drapes.  The windows that were in every side chapel are walled off. 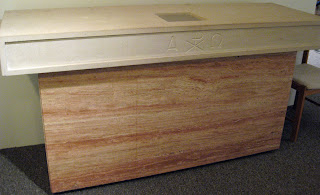 Altar in side Chapel.
10 of the 12 altars are still in place.
The current exhibit is Good Friday:  The Suffering of Christ in Contemporary Art. The exhibit is based on the Stations of the Cross, but instead of 14 (or 15) Stations, the artworks are broken into 6 episodes:

I think I took pictures of the artwork in all episodes, although I may have some in the wrong episode.   The museum created a booklet with reflections and meditations to reflect upon the Scriptures and the Art.  I thought this would be a meaningful way to experience the Stations of the Cross and more current views of them. 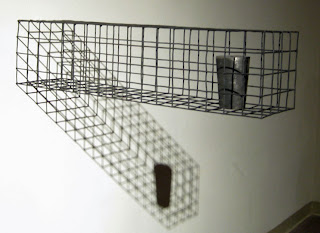 Cup by Thomas Skomski
My sister saw this picture and asked why I was taking pictures
of animal traps.
Trial 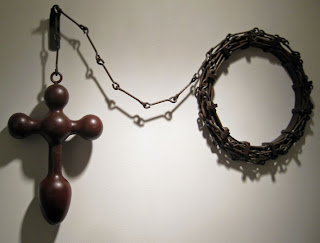 Crowning with Thorns by Michael David
The note on the wall said this resembled a rosary...
Veronica and Her Veil

I think this is
No. 58 C'est par ses meurtrisures que nous sommes guéris
And with his stripes we are healed
by
Georges Rouault
Crucifixion 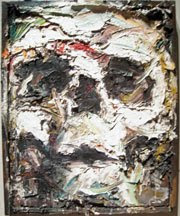 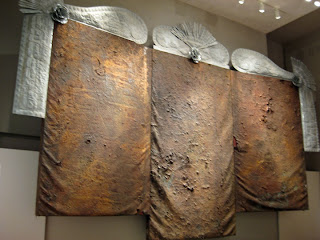 11th, 12th, and 13th Stations of the Cross for Latin America
La Pasíon
by
Michael Tracy
This artwork takes up nearly the entire back wall and I think it is
more or less a permanent display.
I don't get it.
On the 11th station there are nails fixed on the board.

I can't find this in the booklet.
Some wood, some nails, some art.

Icon Wall by Craig Antrim
These paintings were on 3 different walls.
This was my favorite work of the entire exhibit.
Maybe because I *got it* 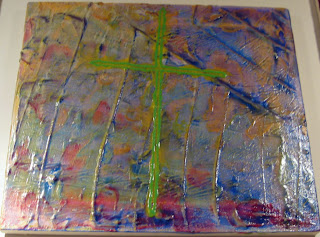 This was my favorite cross in the work above. 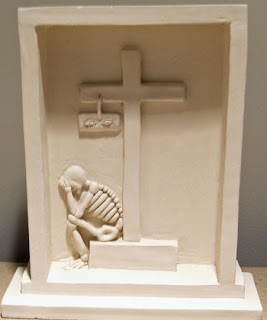 Not sure the name of this either.
I rather like it.
Except for the eyes.  They creep me out.

This might be the work by Dalí
They call me Mellow Yellow....
Pietá 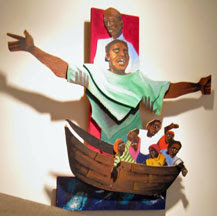 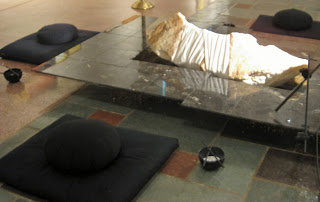 Pietá Stone:  Meditation on the Last Temptation
by Steven Hellmer
Uhm.  I totally didn't see the Pietá here.
I thought this was more burial.
Why are there chopsticks?
Who eats around a dead body?
Burial 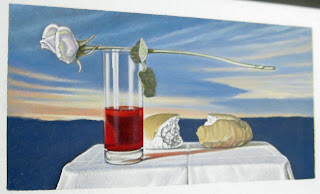 I think this is
Emmaus: Rose of the Passion (Requiem for Caravaggio)
by Nick Boskovich
This is my second favorite piece...
Up until today, I thought I liked modern and contemporary art.  After this exhibit and another one at a different museum on SLU's campus, I'm not so sure.  Much of the art, I just didn't get.  Some of it was down right freaky (like the Zombie).  Some of the media used in a few works was dried blood or other human liquids.  That is just squicky.  I thought I liked abstract stuff but now I'm not so sure.  I think I'm more convinced it shouldn't be in my Church or worship space.
Later on, I'll blog about the other museum...the one with the stuff from the Jesuit Missions.
Posted by Tina aka Snupnjake at 8:29 PM