St. Paul was built in 1983 and is of a modern design.  The stained glass is chunky similar to the stained glass at Seven Holy Founders.  St. Paul's shape is loosely based on a pentagon, with the pews fanned out around Sanctuary.  The grounds had some really nice landscaping.

I haven't been to Stations of the Cross since 1991, the last time I served them at St. Boniface, a year after I graduated.  I vaguely remember the Deacon or Father saying a blurb and then we all sang the appropriate verse from Stabat Mater.  This was then followed by Benediction.  Since I was busy carrying the processional cross, I don't remember the genuflecting, standing, kneeling, standing, repeat for 14 stations.

From what I remember, there were 14 Stations, starting with Jesus being condemned and ending with Jesus being laid in the Tomb.  The stations tonight were introduced by Pope John Paul II in 1991 and there are 15 Stations based on Gospel passages from the Passion.  These stations start with The Agony in the Garden and end with Jesus is Risen.  The little book we followed was "The Stations of the Cross with Pope John Paul II" by Joseph M. Champlin.  The different Stations are listed here and the Gospel passages are here.   For those of you who are more traditionally minded, the original stations are here.  Some history of the Stations is given by the Catholic Encyclopedia (note:  the online version is from 1912..the regulations listed at the end of the article may or may not still be accurate in certain aspects)

Now, I'm all for liturgical innovations (Bless me Father for I have sinned...), however, every single church I have been in have had the 14 original Stations of the Cross.  It seems rather silly to be walking or praying in front of Stations that don't match the new version.

Basically this is how Stations went tonight:
Father:  We Adore You O Christ and We Praise You
(genuflect)
Us:  Because by Your Holy Cross You Have saved the world
Gospel reading for the Station
(kneel)
Reflection on the Gospel reading
Us:  A snippet of a psalm, either: 6, 130, 32, 38, 51, 22 or 62 (mostly the Penitential Psalms)

Tonight Father skipped Station 15.  After Stations, we prayed for the Pope's intentions, said an Our Father, Hail Mary, Glory Be and a prayer for a restful night and a peaceful death.  Father then announced we should all go to Confession within the next week or so, so that we could get a Plenary Indulgence for ourselves or someone who has died.  I have to say this was the first time since I've started this little adventure that I've heard this.  What would have been nice if Father had stuck around to have Confession.  It's a little difficult to get to Confession when it is held before Saturday Vigil Mass for 15-30 minutes in nearly every single parish in the Archdiocese. 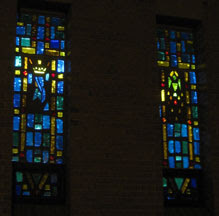 Another Exterior Shot
Window and the Holy Family 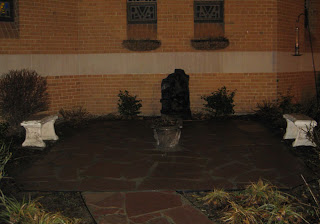 A little garden outside the Church
I think it is St. Francis of Assisi...

I have to say, these are the awesomest doors.

View from the Back Pew.
Hey, it's the old Busch Stadium...
It's a tear drop above the altar.
God's crying.  I'll take bets on what...
(architecture, bored to tears over the homily, the possibilities are endless..hey He
could be crying over my snarky comments...uhm.  Oh dear. tears of mirth I'm sure)
Behind the ambo is the baptismal font, which is draped with purple fabric. 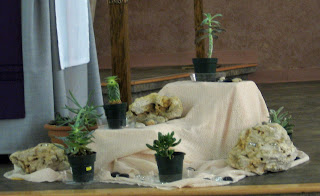 It's a desert garden next to the altar.
Maybe God's allergic to cacti and that's why He's crying.
FYI:  There was Holy Water in the Holy Water things. 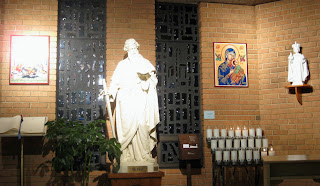 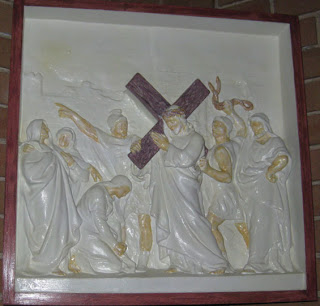 Station of the Cross
Jesus Meets the Women of Jerusalem 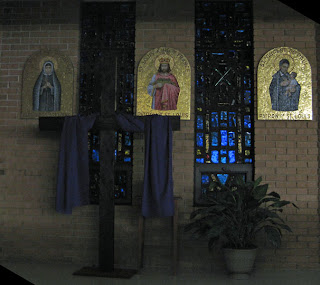 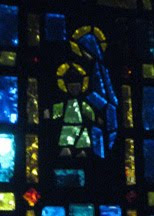 Mary and the Infant Jesus Window
in the cry room.
Posted by Tina aka Snupnjake at 11:02 PM