Continuing with the theme for the month, St. Joseph, I visited St. Joseph in Farmington.  I attended the 9 am Mass.  Normally I'm not down with such an early Mass coupled with an 70 minute drive, but there were pancakes...

The choir was in the choir loft and was accompanied by an organ.  The music today:
Opening:  Save Your People
Leaving of the Elect:  May God Bless and Keep You
Offertory:  In These Days of Lenten Journey
Communion:  I Want to Walk as a Child of the Light & Fly Like A Bird
Recessional:  Lift High the Cross
Mass:  Mass of Creation (I suspect..I know the Lamb of God was)

Today was the Second Scrutiny for those who are becoming Catholic or being Confirmed through RCIA at the Easter Vigil.   Instead of having the Gospel story about the Prodigal Son, the Gospel was about the Blind Man.  After the homily, the catechumens (or elect) come up to the front of Church and Father prays over them and blesses them.  Then they leave.  Having the catechumens leave at this point comes from the ancient (like pre-400) Church when it was illegal to be Catholic.  The catechumens would leave before the Liturgy of the Eucharist to protect the community.  There is also the idea that since the catechumens are not Catholic, they are unable to fully participate in the life of the Church.

Father's homily started off with a story about a tourist in the Holy Land.  The man wanted to take a boat to where Jesus walked on water in the Sea of Galilee and the boat operator said that it would be free to go out to the spot.  When they got there, the man prayed and reflected and then announced he was ready to go back.  The boat operator said it would be $50.  The man said he know knew why Jesus walked on water.  :p  Father then went on to say that miracles were evidence that God is among us.  The Lenten journey is about change.  He went on to talk about Faith and ask if we really believe or if we were just acting.  He then read something that resembled the Act of Faith.  Father then went on to talk about the 4F of being Christian.  I thought he was going to talk about how Christians were rejected from the military (4 F usually meant you weren't fit for military service) but Father mentioned the 4F of farming... Anyway, the 4 F of being Christian: Faith, Fellowship, Fidelity, and Fruitfulness.  Father then went on to say that the death of Jesus was the greatest death.  Father ended with this series of doubt does this while faith does this.

Father skipped the Creed and the General Intentions.  There were intentions during the Scrutiny, so I guess those "count".  Father used Eucharistic Prayer II and there were bells at the Consecration.  Lots of hand-holding at the Our Father and hand raising too.

After Mass there were pancakes! 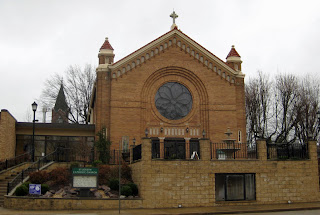 St. Joseph
There is a carillon tower on the right side in the back.
Under the steps, behind the glass, is a bronze statue of the
Holy Family. 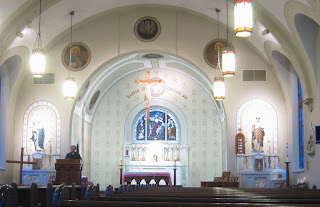 View from the Back Pew
FYI:  That wasn't the priest who said Mass. 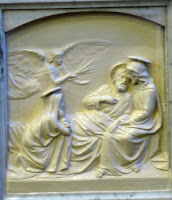 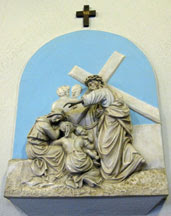 Station of the Cross
Jesus meets the Women. 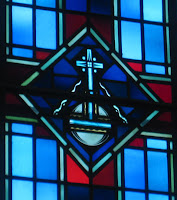 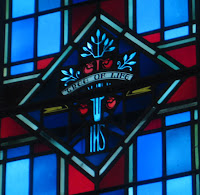 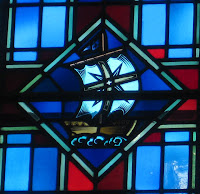 Side windows.
There's an orb, tree of life, and a ship.
I don't think these are the original windows as they don't
match the windows (style wise) in the front and back. 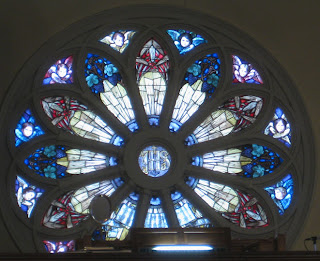 Rose Window
IHS in the center 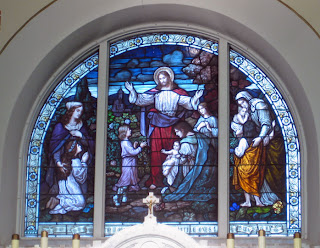 Jesus with little children
Above the high altar.
This is the 2nd window I've seen with this theme in this spot in a church.

Yum! Pancakes!
They had ham, potatoes, and biscuits & gravy.
Links:
St. Joseph in Farmington Website
Posted by Tina aka Snupnjake at 6:06 PM