I had planned to go to another Church named St. Joseph, but one of my regular commenters (p. finley) invited me to St. Martin de Porres this weekend because they were having pancakes and he knows my fondness for them.  The pancakes were delicious and they had Mrs Butterworth's for syrup.  Yum!

I attended the 11 am Mass on Sunday, March 21.  The Church itself is very modern and looks rather like an upside down boat.  It's also bigger on the inside than it looks.

The music was accompanied by a piano, guitar and bass.
Opening:  Lord Who Throughout These Forty Days
Offertory:  You Are Mine
Communion:  Hosea
Closing:  Thy Word is a Lamp

The Responsorial Psalm was scheduled to be Psalm 126, but we used Psalm 91, which is an option.  Because there were no catechumens or elect present, we used the Readings for Cycle C (The women about to be stoned) instead of Cycle A (Lazarus).

Father used Penitential Rite A and Eucharistic Prayer II (no bells at Consecration).  The first intention was odd:  It was asking for God to bring wealth to the Parish.

Father's homily was entitled "Erasing Our Sins."  He started off with a discussion of what was Jesus drawing or doodling in the sand during the Gospel readings.  St. Jerome suggested that it was the sins of the people accusing the women.  Others have said Jesus was taking a moment to pray to God to decide what to do.  Father suggested that Jesus was not writing but rather erasing.  Father then connected this to the First Reading from Isaiah about those who wallow in the past.  Prisoners of the past have no future.  Father then suggested Jesus was erasing the patriarchal system of religion that helped to keep women in their place (uhhhh...).  Father then jumped to a meeting 34 American Archbishops had in Rome a few years ago with the Vatican about how we hand out annulments like candy.  A Vatican Cardinal was also concerned about the religious sisters who worked in the Tribunal, suggesting they were tender-hearted and shouldn't be exposed to such things.  Father then went on to discuss how the Church needs to wake up and realize it is past the "pay, pray and obey" phase of its history.  Father suggested that the Church needs to listen to the people and then speak with Jesus' voice.  (Uhm...FYI:  The Church isn't a democracy...and it is universal...what if you have two opposing cultures?  but I digress) .  Father then goes on to say that this Gospel story in John, about the adulterous woman, was not added until the 3rd or 4th century because the early Church leaders feared that it would encourage laxity in marriage by the women and rather encourages the men because the guy gets off scot-free in the story.  Father then ended his detour and talked about how the woman was given a second chance and grace and how she left the encounter with her dignity in tact.  The Sacraments of Reconciliation and Eucharist (uh...) give us a second chance.  Today is a second chance.

Right before the Mass ended, a Knight of Columbus came up to discuss the work the Knights of Columbus does.  Apparently it is more than have pancakes.  They support missions, schools, and seminarians.  There is also a ladies auxiliary (did not know that!).  Any male over 18 that is a practicing Catholic is welcome to join the Knights of Columbus.  (You do get a sword at some point...) 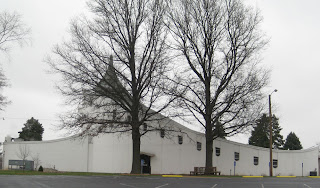 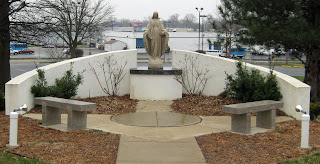 Mary garden
In front of the main entrance
I like how it reflects the shape of the Church. 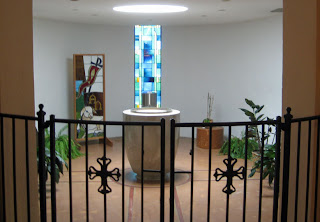 Baptistry
The font looks like the bottom half of Eve...from Wall-E

View from the Back Pew
The Holy Spiders make sure you pay attention during the Homily. 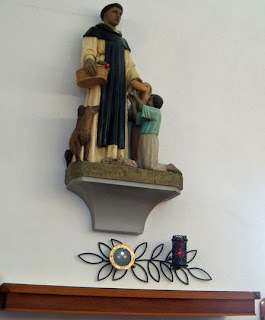 St. Martin de Porres
Relics underneath
Apparently, he set up a hospital for stray cats and dogs.
He's now going to be Jake's go-to saint :) 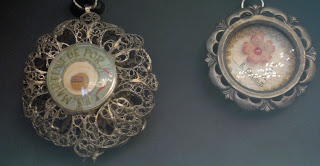 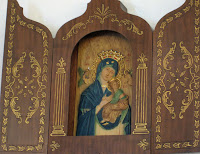 Mary and Joseph
These cabinets can be closed.  Traditionally, this Sunday, Passion Sunday,
is when this was done. 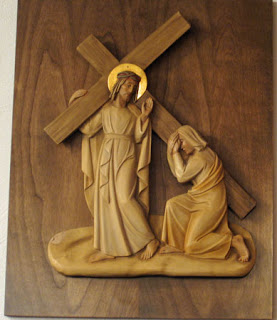