Stations of the Cross - St. Margaret of Scotland

Tonight (3/19/10) I attended Stations of the Cross at St. Margaret of Scotland.  The focus of Stations tonight was social justice (Normally, I try not to link to wikipedia, but Mark claims he wrote it so...).  According to Father James Martin SJ (as seen on The Colbert Report 3/18) social justice in addition to helping the poor and such also aims to look at the root causes of why the poor are poor.  Normally, I'm not a big proponent of social justice since it gets misunderstood and misapplied practically every time it is mentioned, but Glenn Beck is apparently throwing a nutty over social justice and suggests that Catholics leave their parish or even the Church over it.  Of course, being the contrary person I am, I did the exact opposite!

When I went to Stations of the Cross at St. Paul, there was a definite structure.  That structure was lacking. First of all there was no aerobics in the pew as we stood the entire time.  There was a reflection, a prayer and we sang a verse.  The reflection tied the Station to some social justice issue.  Then we said a prayer that prayed for the social justice issue and how it related to the Station.  We then sang the corresponding verse from The Way of the Cross, set to the tune of Were you There with the lyrics being nearly the same but more Station-y.

The Stations were the traditional Stations of the Cross but orientated toward social justice concerns.  They were (as near as I can determine):


An example prayer from Station 9:  Jesus Falls the Third Time:

Lord, you know the depths of utter fatigue- the sense of utter failure.  Infuse your love and hope into the hearts of those despair of beginning again -for whom future happiness is glimpsed only through the awareness of pain yet to come.  Help us too to believe that we can make a difference - when all seems darkness - despair- and repeated failure.

I was really worried (thanks to the Internets) that this would be way out there.  It wasn't bad at all.  I could see it being okay as a sometime thing at a parish, but I think all the time might be a bit much.  I was worried that it wouldn't be tied to the traditional stations at all, but it was.  I may not agree with the wording and how they tied the station to the social justice issue, but overall I thought it was okay.  I did notice men who showed service or compassion weren't included, nor were the sick, but they might be under the general heading of those suffering or those mourning/grieving.  I also noticed there was an undercurrent of *for the right cause or reason*.  Like praying for soldiers who defend the weak and keep the peace...

The Stations were attended by about 30 people of various cultures and ages.  St. Margaret of Scotland is a beautiful church.  It is square shaped and still has the original statues and things. 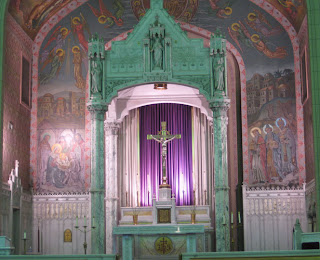 Guardian Angel Statue
I have to say this is a first.
I don't think I've ever seen a guardian angel statue in a Church. :)

Altar of St. Joseph
His death is in the mosaic.

The Eighth Station:  Jesus Meets the Women of Jerusalem

Lantern by a devotional area 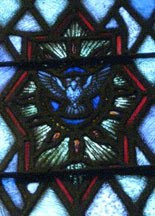 Window Detail of the Holy Spirit 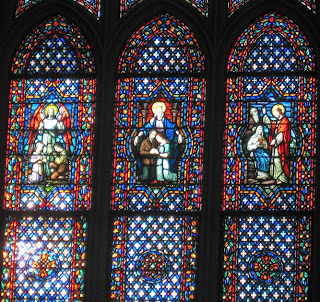 Window
Not sure exactly what is being pictured. 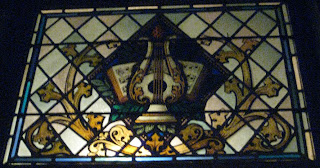 Above the Entrance to the Choir Loft 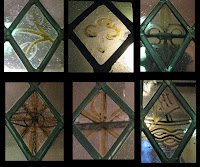 Different symbols on the door windows. 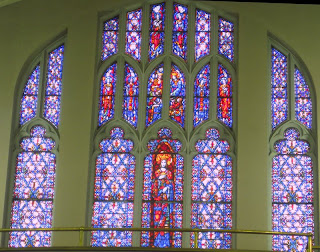 St. Margaret of Scotland Window
(I think...it could be Mary...) 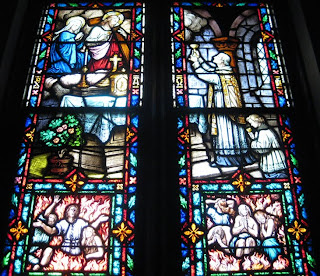 This window shows the Consecration at a pre-Vatican II Mass.
Note the people in Hell or Purgatory at the bottom.
This was in a little side chapel.
Above the door it said it was a children's chapel.
I can't imagine it was originally a children's chapel...
it's an odd window choice for a children's chapel.
Links:
St. Margaret of Scotland Website
Pictures from Rome of the West
Posted by Tina aka Snupnjake at 11:22 PM