Hello!
March is traditionally dedicated to St. Joseph, the foster Father of Jesus.  So this month, I'm focusing on churches named after St. Joseph.

Today, I visited St. Joseph (Croatian) in the Soulard neighborhood of St. Louis.  I attended the 10 am Mass which was entirely in Croatian.  So I can't give you many details like the music and such because, well, I don't speak or understand Croatian. :)

St. Joseph is an older church that was renovated sometime after Vatican 2.  The stained glass windows appear to be original and show scenes from Jesus' life and symbols used to represent Jesus.

The lector wore an alb.  The EMHC knelt at the priest's Communion.  There were bells at the Consecration.  The choir was in the choir loft and the music was accompanied by an organ.

There were patens at Communion!  Also, there was no announcements (aka The Liturgy of the Announcements) at the end of Mass.

Everyone seemed nice and friendly.

Angel Statue found in the Courtyard 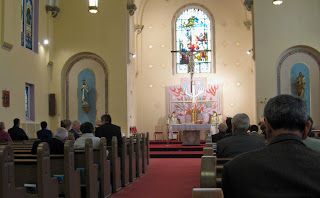 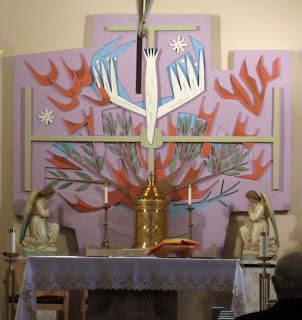 Close Up of the Altar and Tabernacle
The Holy Spirit better pull-up...He's going to crash. 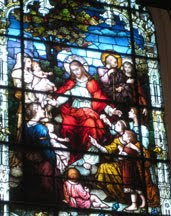 Close Up of Window Above the Altar
Jesus with children

Jesus is dancing to Y..MCA
I think that is a Croatian saint on the wall.
I'm guessing the Croatian colors are
red, white and blue 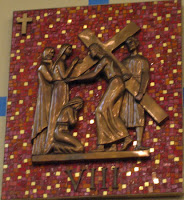 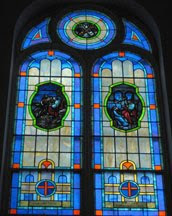 Window
I'm not sure what the images are.
(blowing it up doesn't help) 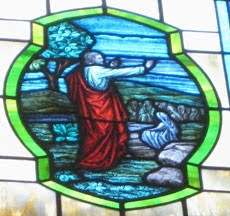 Jesus calms the Sea of Galilee
(I think...) 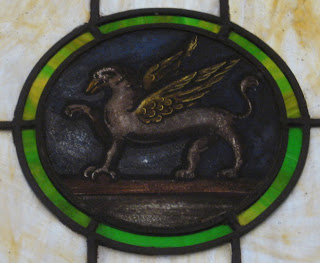 Griffin
This represents Jesus' dual nature:  His Divinity and His humanity
Links:
Exterior photo from Rome of the West
Information about the Church from the St. Louis Archdiocese
Posted by Tina aka Snupnjake at 8:53 PM