There was no choir at this Mass, but there was a cantor.  The music was accompanied by a piano, except for the Mass parts which were accompanied by the organ.  Except for the last song, all of the songs were about light.
Opening:  I Want to Walk as a Child of the Light
Offertory:  The Lord is My Light (Walker)
Communion:  Christ Be Our Light
Closing:  The Glory of These Forty Days

The Kyrie was odd.  It was a song.  We sang Kyrie Elieson, Christi Elieson and Kyrie Elison and the Cantor sang verses.

Before the opening prayer, Father gave a mini-homily about how we are called to be transfigured and how we should pray for integrity.

The deacon gave the homily.  He started off talking about how the Gospel we hear on Sunday never gives the complete story, but taken together, form a stream.  He then went on to talk about how Jesus had an identity crisis.  Until the Transfiguration, Jesus did not know who He was.  Uhm.  Actually Jesus knew who He was a lot earlier, so either I misheard the deacon or ...  The homily then went on to talk about how we need to be transfigured, it can happen constantly.

The intentions were focused on social justice with the second intention was for Israel.

Father said Eucharistic Prayer III and there were no bells at the Consecration.

St. Justin Martyr seems like a very active parish.  According the bulletin, they will be having a Christian Seder right before Holy Thursday Mass.  They have Vespers Sunday afternoons in Lent.  They will also be participating in Stations of the Cross at a neighboring Protestant parish.  They have a parish library.

Cross in the Narthex

Sacred Heart of Jesus
in the Narthex

The Holy Family
The only statue inside the actual church.
They don't look very comfy... 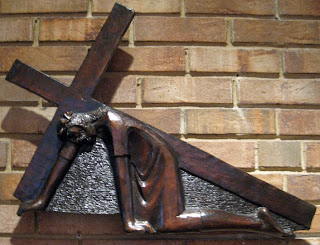 Jesus Falls for the First Time
Station of the Cross

Mary with an alien in her tummy.
Jesus:  Bubble boy

The elusive Spirit of Vatican II
Yes.  It is a window dedicated to Vatican II.
Vatican II documents
Overview

Window with a variety of Saints
Pere Jacques Marquette, SJ, one of the many missionaries who came to St. Louis
His cause for canonization is still open.

A saint (thoughts on who?)
Often saints are depicted with how they were martyred.
This poor saint was obvious killed by a dive-bombing pigeon.
Update: After much discussion with friends, we have an ID.
The red halo indicates martyr.  It is most likely St. Justin Martyr.  He wrote for the early Church.
That explains the book.  Also, there were house Churches back in the day,
which explains the gold building.
Still working on the 3 people.

More Saints
My guess for the top saint is St. Joseph,
as he is often depicted with lilies and carpentry tools.

Some of my readers have requested more outdoor shots.
So here's one of an outdoor "church" I found in the back.
There's an altar, ambo, and a statue of a praying mantis.