Basilica of St. Louis, King of France aka "Old Cathedral"

You will have to excuse me, I'm a little sick, so this blog post isn't up to my usually standards.

For Ash Wednesday, I attended the 11:15 am Mass at the Basilica of St. Louis, King of France, locally known as the Old Cathedral.

Mass was about 75-80% full of a variety of people who work downtown.  There were professionals, families, construction workers, sheriff deputies and police officers.

Music was accompanied by the organ.  There was a cantor.  I think it was the same cantor from St. Agatha but I'm not positive.
Opening:  Forty Days and Forty Nights
Distribution of Ashes:  Come Holy Spirit (??) and Ashes
Offertory:  Hosea
Communion:  Where Charity and Love Prevail
Recessional:  The board said From Ashes to the Living Font but it sounded like Lord Who Throughout These Forty Days.

Father included the Penitential Rite, which according the missal I had said it was supposed to be skipped today.

Father's homily was about how we think about renewing ourselves externally at this time of year, but we should be thinking about our interior lives.

Since there was an earlier Mass at the Old Cathedral, I'm guessing the ashes were blessed then, as they were not blessed at this Mass.

Father did invite everyone to come to daily noon Mass at the Old Cathedral. I think he said the Mass was uber short to be respectful of your time...

This is above the main door.
"Behold the Tabernacle of God with men, and He dwell with them"
It's from the Book of Revelations

These say the same thing, I think.
The one on the left is in French.
It says "My House Shall Be Called The House of Prayer"
Matthew 21:13 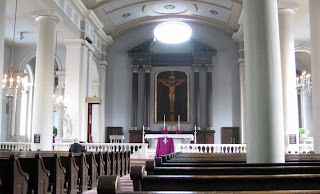 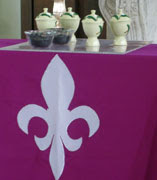 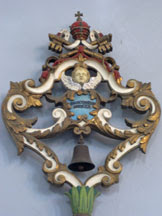 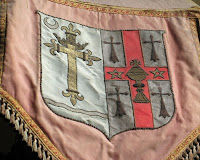 The tintinnabulum and crest on the umbrella, signs of a basilica
I believe that is the crest of Cardinal Ritter. 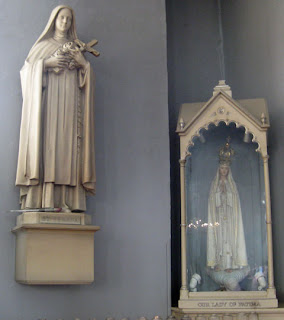 St. Teresa and Our Lady of Fatima 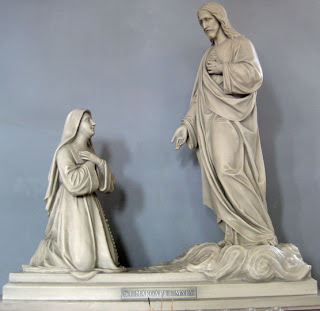 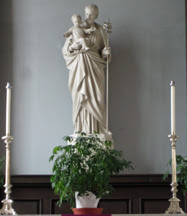 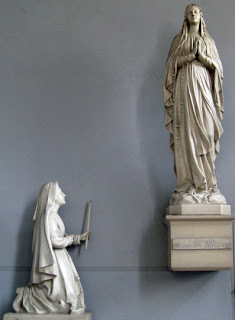 St. Bernadette and Our Lady of Lourdes

Crucifix in the back
One of the ushers was telling me that St. Philippine Rose Duchesne donated
the crucifix to Bishop Rosati