Our Lady of the Holy Cross - St. Louis

The church is gothic style.  The church doesn't seem very wide or long, as it only sits 400.  However, it feels very tall.  Although the church sanctuary was renovated in 1989, the high altar, reredos, windows and original statues still remain.  The parish itself is very diverse, with many descendants of the original parishoners still attending.

Music was accompanied by a piano with a small choir in the front.  The music selections:
Processional:  In These Days of Lenten Journey
Kyrie:  To the tune of Wade in the Water
Preparation of the Gifts:  He's So Real
Holy:  In Latin
Lamb of God:  In Latin
Communion:  On Eagle's Wings (FYI:  This song is based on Psalm 90, which was the Psalm for today)
Recessional Song:  Lord, Who Throughout These Forty Days

Before Mass, there was Confession and the Rosary was being recited.

Before the Penitential Rite, Father gave kind of a mini-homily that touched on temptation.  We did say the Confiteor.

The homily was different.  Father posed two questions: do you forgive Tiger Woods and what phrase describes the temptations in today's gospel.  After the questions were posed, we discussed the answers with our neighbors.  Then Father asked for our answers.  He then moved on to his homily and talked primarily about the temptations.  He then asked us how many of us forgave Tiger Woods?  What would you do if your spouse cheated?  What is forgiveness?  It is a decision of will.  Humans fail.  Father also discussed fasting and how it can accent one's desire for Jesus.

At the final blessing, Father mentioned that in Rome it is traditional to visit the different churches in Lent, the Station Churches.  Today's station is St. John Lateran (This is the Pope's Church) (Virtual Tour from the Vatican!)  Here is another link about Station Churches and this one is from PNAC, the American Seminary in Rome.  Father said a prayer reflecting this. 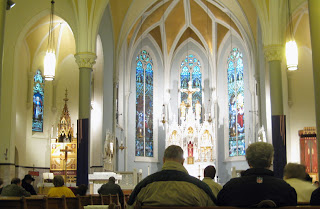 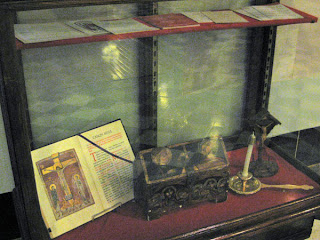 Display of Historical Items
The top shelf has works by Msgr. Martin B Hellriegel
The book is open to a page that says "Canta Missa" 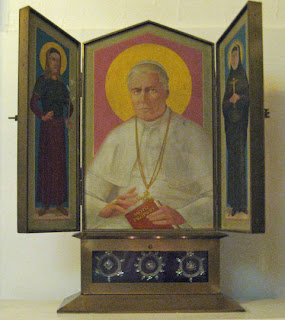 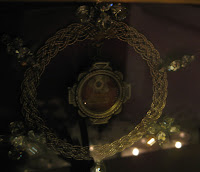 Mission Cross
I'm very curious about these.
I've seen 3-4 of them, all in parishes that were primarily German.

Mary's altar
It is traditional to cover statues in Lent.
In the center is a relic of St. John. 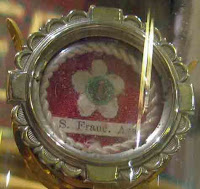 Relic of St. Francis of Assisi

Trinity
Note the rainbow at the top.

Our Lady of Mt. Carmel

Father's dog, Elijah, who joined us for Mass.
He sat next to me for the Liturgy of the Word. :)

Links:
Website from the St. Louis Archdiocese
Pictures from Rome of the West
Posted by Tina aka Snupnjake at 5:14 PM