First Reflection on the Journey

As I write this, I have visited 35 of the roughly 200 churches in the Archdiocese of St. Louis, or 17.5% of them.  As Lent starts next week, I thought I would look back on what I have learned and discovered so far.  So here it goes, snark and all.

I really have to say, I miss being part of a larger community.  I didn't think it was going to be that big of a deal to go to a different Church every week.  It is hard to describe.  I guess the best way to explain it is as a sense of isolation.  I wasn't seeing the same people every week.  I wasn't building any kind of relationships or community.  It is getting really, really hard.

Perhaps my biggest concern, issue or thought-process is, what does it mean to be Catholic?  How is being Catholic different from being Protestant, Jewish, Muslim or some other religion?   Is there such a thing as Catholic Identity?

I think I finally understand what Fr. Z is getting at.   Once we reclaim or strengthen our identity as Catholics, I think the rest of the issues will solve themselves. As Pope Piux XII says "Let the rule of belief determine the rule of prayer."

I could spend a great deal of time about the music I've heard.  This is what happens when everyone gets their music from the same source, everyone has the same music, which is good because I know what the songs are for the most part.  It does get monotonous after awhile.  At this point, I'm still liking guitars and other non-organ instruments in Mass.  However, Mass is not a rock concert nor is it a performance.  Well I guess it is a performance of God, Jesus and the Holy Spirit. (PS.  It's not a performance for you either Father.)  Stop clapping for people doing their jobs at Mass.  Additionally, I was always taught that the music should reflect the theme of the readings, Father's homily, the season, or maybe if it is a Marian day, a Marian Hymn.  Some places are really good about this and some are really really bad about this.  This also connects to Catholic Identity.  Why are we singing songs that I hear on TV for Time-Life?  Are there no modern Catholic composers?  Must we swipe the Protestant stuff?  I know some people call the music drek...but can't we have Catholic drek?

Nearly every week I'm unhappy with the intentions or the Prayers of the Faithful.  I was always taught that the first intention is for the Church, then for civil authorities, then the social justice concerns and then intentions specific to the local community.  It is amazing how many places do not pray for the Church or for civil authorities.  I'm also shocked that in this Year for Priests, more places aren't praying for priests in the intentions.

Probably the thing that aggravates me the most about Mass is the Extra-Ordinary Ministers of Holy Communion.  Is it really necessary to have 8+ ministers? One Mass had 8 plus the priest for 100 people.  Really.  How did my grade school manage with 4 total for 250 kids?  I understand in cross shaped churches if there are sets of ministers in the arms and in the center but when there is one main aisle, why are there four people distributing?  Really?  We can't spend an extra 5 minutes in Mass?  We can't sing an extra verse?

I guess the other thing that annoys me is the noise in church.  Perhaps I'm having flashbacks to when, in 8th grade, I asked my friend what song we were on and I got assigned a tower.  You don't talk in Church, unless you are dying, and even then I'm pretty sure it was more acceptable to keel over.  Yes I'm guilty of talking in Mass, even of snickering through a homily (or two).  It is amazing to me how loud it is in Church before and after Mass, I wonder how anyone can pray.  Can't you hold your conversations in the narthex or outside?  Yes I'm guilty of this too sometimes.

I lied.  The thing that aggravates me the most is not coming on time to Mass (families with little kids are excused).  That drives me insane.  You get to work, to school, to games on time, get to Mass on time.  I can't believe how many people come late to Mass.  You'd think the fact they almost always have to walk up to the front pews while Mass is ongoing would teach them.

On the whole, it has been a positive experience.  I've heard a number of good homilies and a number of homilies that make me appreciate Fr. B all the more.  I've heard music I wouldn't normally hear.  I've seen churches (and areas of the archdiocese)  I would have never ever have gone to.  I'm experiencing the big tent of the Catholic Church and it is rather cool when you sit and think about it.

Most importantly, I think undertaking this project has made me a better Catholic in a way.  Before I started this project, I was rather content in my knowledge as a Catholic.  Now, I actually do research and question things as I write each post.  I've learned a great deal.  I've also had to practice charity (some of you have no clue as to the posts that descended into snark-fests), understanding and looking at things from different perspectives.  I've experienced or plan to experience different liturgies and prayers the Church offers.  I've met many nice people.  It's been a blast! 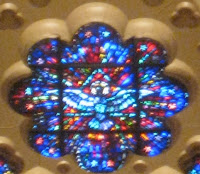 Holy Spirit
Window from St. Francis Xavier, the College Church
FYI:  I'm not stopping...I still have 165 to go!
Posted by Tina aka Snupnjake at 10:19 PM