On Sunday, February 21, 2010, my pal and fellow blogger Mark asked if on the way back from Our Lady of the Holy Cross we could stop at the cemetery and take pictures since it was such a dreary day.  Sure, why not? Calvary Cemetery began in the 1850s.  Many of the smaller cemeteries, such as the one attached to the Old Cathedral, were moved here.  Former Archbishops, bishops, priests, religious are all buried here with all sorts of people like the Chouteaus and the Soulards.  There are all kinds of tombstones. 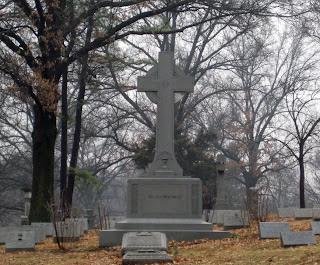 A Priest Forever
Archdiocesan Priest Graves
The grave directly in the front of the cross was Cardinal Ritter.
He's at the New Cathedral now.
Monsignors are to the left in the back. 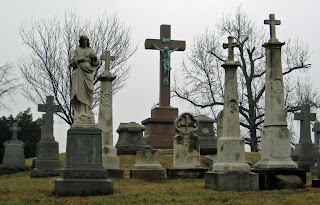 Really Really Old Priests graves.
I think the newest I found was 1920.
Many parishes had the monuments erected for their pastors.
Archbishop Kenrick's tomb is directly in front of the crucifix.
Bishop Kain's tomb is to the left.

Gothic Spire Monument
I've seen angels, crosses, hearts, lambs.
This is a first.
I didn't realize the mausoleum was so totally cool.  There was a chapel downstairs.  On the first floor there was an altar where one could theoretically say Mass.  All of the windows were stained glass. 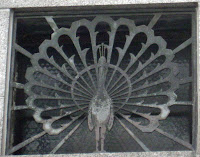 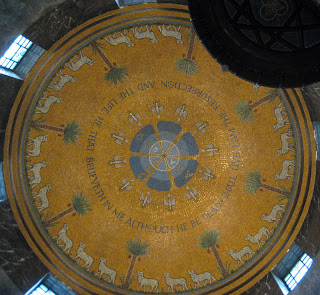 Ceiling on the first floor, in the chapel area.
It reads:
"I am the Resurrection and the Life,
He that believeth in Me, although dead,
shall have eternal life." 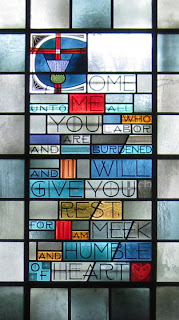 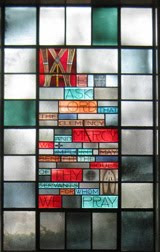 Pray for the Souls of the Faithfully departed. 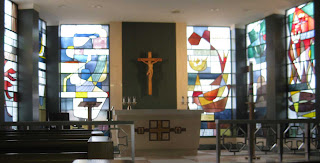 View from the Back Pew
Chapel downstairs 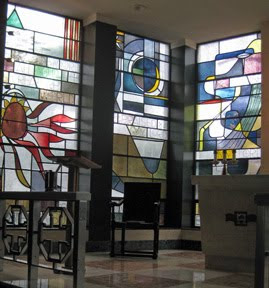 St. Francis of Assisi
This window was off the side down one of the hallways.
There is a squirrel, bird, bunny and a wolf. 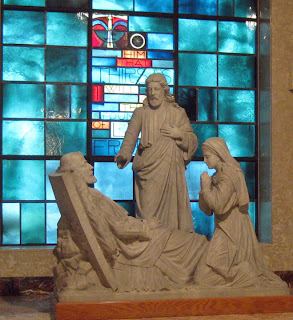