Our Lady of the Rosary - Spanish Lake

Our Lady of the Rosary is roughly in the shape of an isosceles triangle, with the sanctuary at the tip of the two equal sides.  It is throughly modern and sparsely decorated.  There were banners.  The Stations of the Cross were on the back wall.

There was a choir in the back on the left.  The songs were:
Opening:  Praise God From Whom All Blessings Flow
Song of Presentation:  Christ Be Our Light
Communion:  A medley of Open My Eyes and Amazing Grace, the verses alternated.
Closing:  Sing of the Lord's Goodness

The opening song was played on the organ, the rest of the songs were played on a piano, and the Sing of the Lord's Goodness was accompanied by an African drum.

The Church itself was half full and most of the parishioners were older and elderly.  The entire Mass I kept thinking something was missing (besides people to fill the rest of pews) and I finally figured it out during Communion.  There were no young or little boys.  There was one teenage boy and that was it.  There were few men that were not of the baby-boomer generation.  This is a big contrast to Holy Rosary, which was full of men of all ages.

Instead of a homily, Father instead talked about the Faith for the Future campaign, to benefit the seminary.  There was also a nice video (which you can see on the website.) about the seminary and the men who have studied there.  I was able to pick out a couple of priests (Hi Fr. B!) and churches in the video. Apparently our seminary needs some repair.  Even if there is no direct benefit to you (according to Father at Mass) you should still donate to the campaign. (Really you should, so I can get the seminary's books through my university library...directly benefits me :) ).

The Mass was a typical Mass.  Father's chasuble was just plain green.  He said Eucharistic Prayer III and there were no bells at the Consecration.  His gestures seemed off.  I can't say for certain, the gestures just seemed not right.  Father called the Our Father, the prayer of the disciples.

Father did say at the end of each Mass, the parish would pray the prayer the Faith for the Future campaign leaders provided. 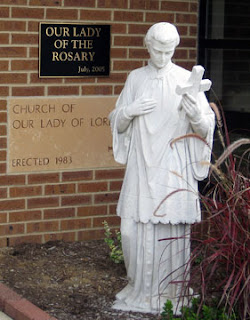 The Cornerstones and a statue of St. Aloysius

Our Lady of the Rosary Banner 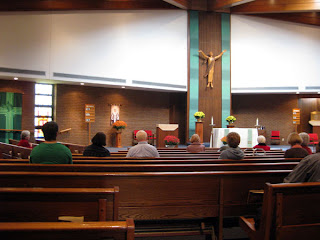 I believe I Can Fly.

I'm pretty sure this is supposed to be the Crucifix.

But it seems to be missing the Cross.

Maybe it is the Ascension?

(I have been informed this is Touchdown Jesus...wonder who Jesus is cheering for?) 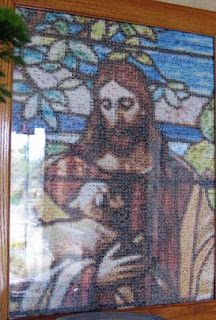 This picture is a mosaic made from picture of the

families from the parish.

This is totally awesome.

Posted by Tina aka Snupnjake at 3:30 PM