Happy Feast of St. Blaise!
There's still time to find a 5 pm (or later) Mass and get your throat blessed if you forgot!!!  St. Blaise is the patron saint of throats because he saved a little boy from choking on a fish bone.

I went to St. Vincent de Paul near Soulard for Mass today.  Mass was at 12:05 pm which was perfect because I could go on the way to school.  I have passed this church everyday for years but have never gone inside!  St. Vincent de Paul is run by the Vincentians aka Congregation of the Missions and is one of the oldest churches in the city of St. Louis.  Much of the original artwork is still present.  Interesting there were plaques on nearly everything which said "Pray for ..."  This parish focuses on social justice concerns, especially care of the poor.  They have a soup kitchen and a sandwich window.

Father had us sing an opening song, Gather Us In and a closing song, Holy God, We Praise Thy Name along with singing all of the Mass parts.  We sang them a capella.

Because St. Blaise is a martyr, I expected Father to wear red vestments, as the red represents blood shed for Christ.  It's why Cardinals wear red.  However, Father wore green (because it is Ordinary Time) vestments (with the stole outside the chasuble).  The Feast of St. Blaise is an optional memorial, but Father used the prayers for St. Blaise today.  I'm sure it was an accident/oversight on Father's part.

For the Eucharistic Prayer (which was EPII), Father had the congregation come and gather around the altar.  I did notice Father forgot to use a corporal on the altar. This is technically not allowed, as it blurs the line between the clergy and the laity.  When I was in grade school, Father had us come up so we could see what was going on.  I did speak to one priest who used to do it and then stopped.  He started it because he thought it would encourage community.  What happened was half the congregation would come up and the rest would stay in the pews which didn't build community like he thought.  So he stopped.   During the Mass, there are a variety of "secret" prayers, prayers the priest says quietly.  There is one at the Gospel and one at the washing of hands, for instance.  Father said all of these prayers out loud. 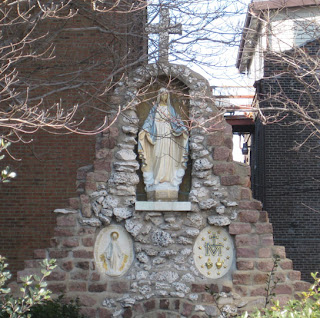 This is a little Marian grotto along the side of what used to be the school.
It seems rather forgotten.
There are bushes planted around it, but no way to actually get to it.

This is a cross in the main entry way.
Wer ausbarret bis ans Ende wird selig
Whoever Holds Out To the End Will Be Blessed
There are a series of dates that run down the length of the Cross.
The first date I can clearly make out is 1852.
I'm thinking the dates correspond to epidemics that raged in St. Louis.
There was a big cholera epidemic that ended in 1852.
There were also epidemics in the 1860s, 1870s and 1880s, all of which have dates on the cross.
The last date ends in 8.  It could be 1908 or 1918...
If you know why the dates are on there, let me know :)
Thanks to my plurk friends for help with the German! 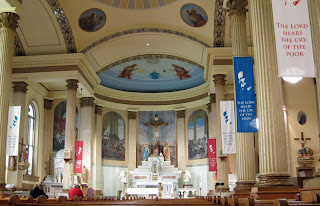 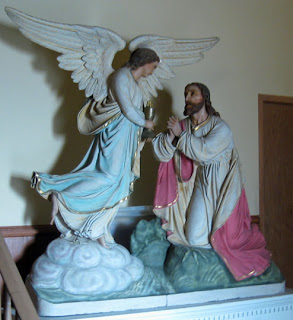 The Angel of the Lord and Jesus
in the Garden. 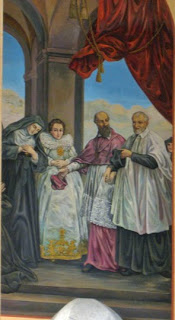 A scene from the life of St. Vincent de Paul.

Window
Many of the images at the very top of the windows have faded out.
I saw remnants of a pelican in one and a crown of thorns in another.
I'm not sure what the symbol used to be in this window.
At the bottom is my photoshop work. 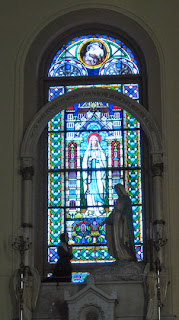 Mary
I think the nun kneeling maybe St. Louis de Marillac.
She founded the Daughters of Charity to help St. Vincent de Paul.
FYI:  I'm currently sitting in Marillac Hall, at what used to be Marillac Collge,
but is now UM-St. Louis.