On February 7, I attended 10:30 am Mass at St. Augustine.  St. Augustine was created in 1992, in the first round of merger to hit the Archdiocese.  St. Augustine was created from the merger of St. Barbara, St. Rose of Lima, St. Edward, St. Mark the Evangelist, and Notre Dame of Lourdes.  St. Augustine is located at what used to be St. Barbara.
This was the friendliest parish I have ever been in.  Lots of parishoners came and greeted me and thanked me for coming.  In fact, a nice lady asked me what parish I was from and I said I was looking for a new one and she told me that this was the parish for me!  They also apologized for having a visiting priest as the pastor was taking a well-earned vacation.  The majority of the roughly 75 parishoners were well dressed.  Elderly women wore nice hats and men wore suits.
The music was gospel orientated, but rather low-key.  There was lots of clapping.  I'm not sure what the songs were for the most part.
Opening:  All Things Are Possible (?)
Offertory:  Here I Am Lord (even Gospel doesn't pep this song up!)
Communion:  Do What the Spirit Tells You (?)
Closing:  Go
What was interesting is that for the Penitential Rite, the congregation sang "Have Mercy on Me Lord, I'm a Sinner."  I'm not sure what exactly was being sung, but that line was repeated a great deal.  The Gloria was sung and had a calypso like feel to it.  The Alleluia was sung to the tune of Amazing Grace.
Father's homily was rockin.  You know that stereotypical view of Southern Baptist preachers that you see on TV?  That was Father's style.  It was also very long.  Father talked about how the prophets may not have heard the call to be prophets initially.  The Grace of God comes through to help the Prophets.  We are called to be prophets.  Here I am Lord, send my abnormal self to do your will.  Father then moved on to St. Peter.  In the majority of the Gospels, Peter is bumbling and stumbling.  In today's Gospel, Peter immediately acknowledges Jesus and that he is a sinner.  God is calling us to be witnesses.  Father then moved on to being inadequate and taking personal responsibility.  It is not the demon who makes us do destructive things.  It is us.  We are the ones that choose how to behave.  God created our DNA to follow Him.  It's us that cause things to go wrong.  God uses sinners.  We have got to stop making lame excuses.  At the end of the homily, Father and then the congregation sang Lord, If Not for Your Grace.
The Liturgy of the Eucharist was interesting.  Father used Eucharistic Prayer II (Mass was already at an hour long when he started it!)  and there were bells at the Consecration.  Instead of pews, St. Augustine has chairs that interlock along the sides.  Every so often, the chairs would have kneelers but the majority did not.  It was evenly split between the parishoners between kneeling, standing, and sitting.  (I believe the norm for this archdiocese is to kneel from after the Holy Holy Holy to the end of the Great Amen.)  Everyone held hands at the Our Father throughout the church.  The Sign of Peace was very social and very loud, rather long.  Father was out and about shaking hands.
After Communion but before the Final Blessing, members of the parish got up and gave testimonies, about how thankful they were about God, Jesus, etc.
There was an female adult server to assist Father.  She and all the Extra-ordinary Ministers of Holy Communion all wore a kente cloth stole/sash over one shoulder.  It wasn't like Father's stole or a deacon's stole, but was worn straight down over one shoulder.
Pictures: 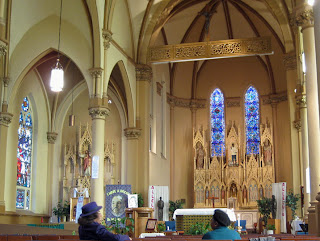 View From the Back Pew!
The altar cloth matched Father's Chasuble
It was the exact same pattern-
green background with yellow seed circles.

Jesus with Children
At the bottom of each window, the family that donated the window
is mentioned in the scrolls. 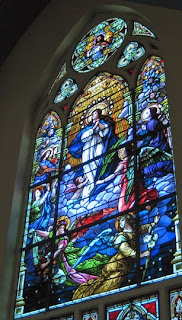 Window above door in what used to be the Baptistry
It's the Eye on my money!! 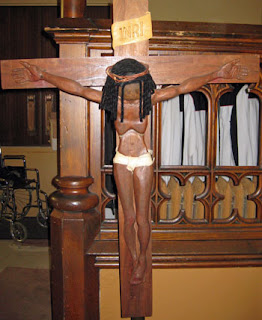 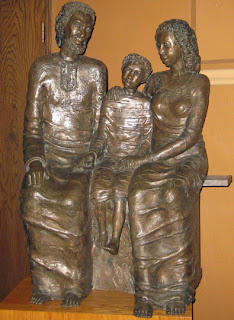 Banner on the Altar
The Holy Family 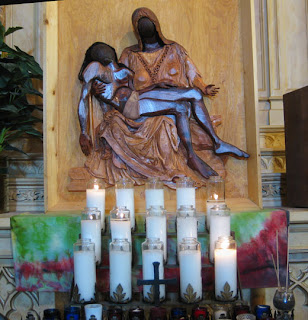 The Pieta
Notice the tie-dye underneath.
Totally awesome.

St. Augustine of Hippo
Links:
St. Augustine Website
Pictures from Rome of the West
Posted by Tina aka Snupnjake at 7:47 PM