As part of exploring the St. Louis Archdiocese and the big tent that is Catholicism, I've decided to attend non-Mass events, such as Stations of the Cross or Liturgy of the Hours.

Tonight, I attended a Taizé prayer service sponsored by the Sanguis Christi Spirituality Center, a new ministry of the Sisters of the Most Precious Blood.  It was held in the chapel of St. Elizabeth Academy (SEA), where I happened to go to high school.  I hadn't been in the chapel or the school really since I graduated in 1994.

When I walked in, the chapel was dark except for the emergency lights and the candles on the altar.  Two students were there, playing the violin and the keyboard.  (They did an awesome job BTW).

I snagged a program...
Opening Song:  All I Do Today
Reading I:  Isaiah 2:2-5
Songs:  Wait for the Lord & Jesus Remember Me & Stay With Me
Reading II:  John 14:27
Songs:  Confitemini Domino & Ubi Caritas, & We Adore You, Lord, Jesus Christ & Jesus, Remember Me
Closing Prayer:  Prayer for the Decade of Non-Violence
Closing Song:  All I Do Today
I think they played an additional song off of a CD that sort of sounded like a litany, but wasn't.

Basically, we sang the songs repeatedly.  So for example, Ubi Carita, we sang and repeated it around 10 times.  There were periods of silence for quiet prayer and reflection.  About half way through, the crucifix that was propped up against the altar, was placed on pillows, so that people could come up and pray around the crucifix.  A person would come up, kneel and then bend so that his/her forehead was nearly touching the crucifix.

I'm not exactly sure what the point of Taizé prayer is or how it "works"  I liked it better than I liked Adoration.  I think it is because I can't handle long periods of quiet.  So I liked the singing.  The program called the songs chants.  I would disagree maybe.  It didn't sound like chant.  I guess when I think chant, I think Gregorian chant and monks in monasteries.  So this maybe a valid form of chant that I've never been exposed to.

The over-all theme of night was peace and praying for peace. The program mentioned that Taizé promotes inner unity and allows one's spirit to rest in God.  I'm not sure what that means.

Some of my more traditionally minded Catholic friends were concerned that I was going to Taizé prayer, as in the past there have been some *shenanigans*.  I could see where and how that could happen.  The opening and closing song, All I Do Today, seemed to ignore that really everything I do today should orient me towards God or should bring me closer to God.  The Prayer for the Decade of Nonviolence was just odd.  I hesitate to call it a prayer because it doesn't include anything about God, Jesus, Holy Spirit, Mary or any Saints.  I kind of thought Catholic Prayers had to mention one of those somehow.  I think if you replaced those 2 things, it was okay.  But, I'm rather liberal.

SEA School Seal
In the floor, in front of the Chapel
Woe to the student who walked on it...
Except for seniors, who have been known to dance on it...
After graduation...

St. Elizabeth of Thuringia aka Hungary
Patroness of the School 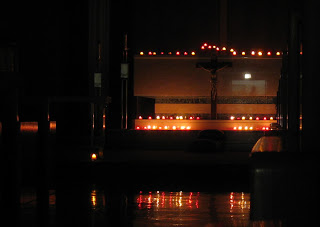 Judith
When the school was rebuilt/expanded in the 1950s, the students
chose the female saints for the windows.  At the bottom of the window
is the virtue the saint is most represents.
Judith has a bag of gold or wheat...the word starts with Holo..
The rest of the windows:
Esther
Cecilia
Agnes
Elizabeth of Thuringia
Mary
I despaired of getting a shot of the windows, but then a floodlight turned on! 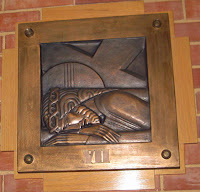 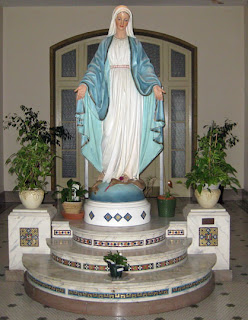 Statue of Mary
I think this is from the school's original chapel,
part of which survives as the music/orchestra room
It is now in the front of the convent. 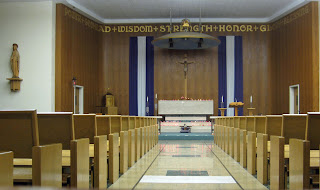 View From the Back Pew!
(You didn't think I'd forget!)
The words going across are: Power, Godhead, Wisdom,
Strength, Honor, Glory, Blessing
Links:
The Taizé Community
Old Entrance taken by Rome of the West (traditionally, the graduating class has the class picture taken here)
Posted by Tina aka Snupnjake at 11:13 PM