Hi All!  Happy Candlemas!!  I discovered that today is the day that candles are traditionally blessed, hence the name Candlemas (lists some traditions).  It is actually called the Feast of the Presentation of Jesus in the Temple or the Purification of Mary.

So I know what you are saying.  It's not Sunday.  It's not a holy day of obligation.  Is Jake sick (nope!)?  Why is Snup at Mass?  Well, one of my traditionally minded friends asked if I was going to Candlemas and I responded, uh.  What's that?  After some research, I discovered that there was a procession with candles and candle blessings!  So of course, I had to see this!

Mass at the Cathedral started at 12:05 pm.  Which I thought was odd but then we recited the Angelus before Mass, so the odd start time was cleared up.

Because it was Candlemas, everyone was a given a candle, which was lit, and Mass started in a back chapel.  Father said some prayers and blessed the candles.  We then processed into the main Cathedral while Father recited the antiphon for the day.

We said the Gloria but skipped the Alleluia.

There was a chalice veil and a burse.  There were bells at the Consecration and Eucharistic Prayer III was used.  Father cruised through the Liturgy of the Eucharist pretty fast, but given that it is lunchtime and some people have to get back to work, it is understandable and appreciated.  Father even gave us an extra blessing at the end.

Is it wrong that this weekday Mass was more reverent than some of the Sunday Masses I've participated in?

After Mass, Father lead a Perpetual Help Devotion in one of the side chapels.  Unfortunately, I couldn't stay because I was semi-late for work.

Pictures (Note:  It is very difficult to take pictures of things in the Cathedral.  The lighting is funky for one. Also, I don't have a full size tripod, so I rely on things like pews and rails to set or wrap my tripod around.  Those tend to be lacking.  I did my best though :) ): 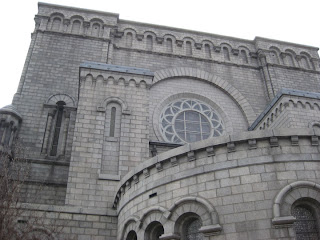 This is the back of the New Cathedral.
The rounded part at the bottom is the Sacristy.
What's neat is you can see crosses on the gutters.
Also, I didn't know the Cathedral had a rose window!

View From the Back Pew!
Way, way back! 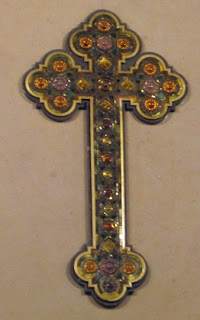 Cross above the main doors. 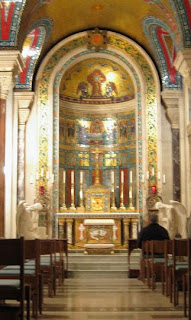 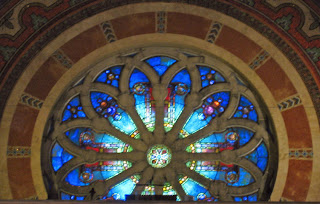 Rose Window in the Front 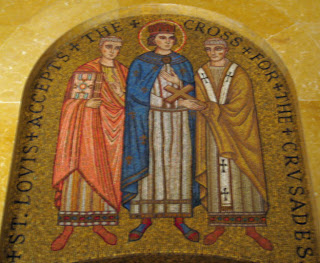 St. Louis Accepts the Cross for the Crusades
Mosaic in the Narthex, the front of the church. 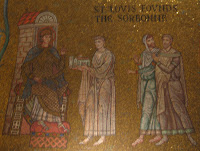 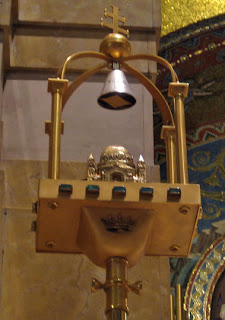 The Tintinnabulum
It is the mark of a basilica. 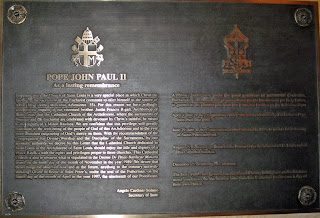 The Cathedral was named a Basilica in 1997.
Here's the plaque with the details.
The column on the right lists the plenary indulgences attached to the Cathedral.
(There are 5!!!) 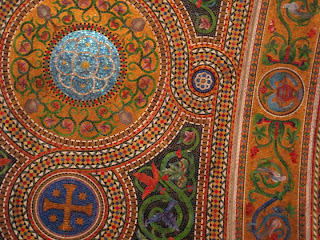 I liked the light blue.  There are stars in it.
This was on a ceiling where we started the procession. 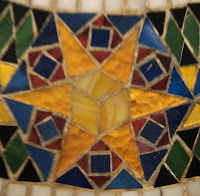 Detail of a mosaic on a wall.
The Cathedral is covered in mosaics.
They are everywhere. 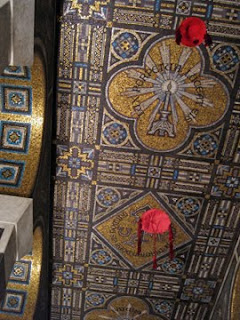 Ceiling of the All Souls Chapel
(Yes I laid on the floor)
The mosaic with the Candle says "Perpetual Light Shine Upon Them" I think
The red hats hanging from the ceiling are galeros, hats that used to be worn by Cardinals.
Tradition says that when a Cardinal's galero falls to the floor, his soul is released from Purgatory.
I have heard rumors of helpful underlings that have used stronger strings to keep the galero
from falling anytime soon :P
Links:
Website of the Cathedral Basilica of St. Louis
Pictures from Rome of the West:  flickr stream, newest series, here, here, here, here, here (This is his second favorite place to take pictures.  He's got tons of posts.)
Pictures taken by Jeff Geerling.  These pictures are awesome as many are taken from the upper walkway!  Someone even let him on the roof!!
Posted by Tina aka Snupnjake at 8:51 PM