Happy Lent Friday!  I hope we all remembered no cheeseburgers, bacon, chicken nuggets or steak today!

Today's fish fry tail is interesting.
What happens when you want to be a good Catholic and support the local parish and school by going to the parish fish fry but your kids (or goddaughters) won't eat fish?  What if, the horror, you don't like fish?  What if, after 40 days of Lent, you'd rather not see another piece of cod?

St. Raphael the Archangel has the answer for you!  They are only having seafood (and not fried seafood either) on two Fridays in Lent.  The rest of the Fridays are really awesome.  There was breakfast for dinner today.  Next week is pizza! 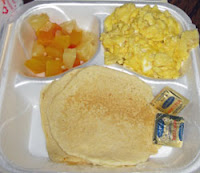 PANCAKES!!!! YUM!!!
This is the kid's plate.  They had toppings too.
Remember this phrase:  Prior planning prevents poor performance/outcomes.
Because 2 pancakes really doesn't satisfy my hunger (Jake snagged my eggs) and I kind of wanted fish, I decided to go to a second fish fry.  Since I was attending an event at St. Elizabeth Academy (post to come) I decided to go to a fish fry nearby.  I decided on St. Pius V.  I was like, I'll get there at 6 pm and be done in plenty of time to get to SEA for the 7 pm event.  I forgot about traffic and parking.  I also didn't realize that people who went home from work to get their families, would now be hitting the fish fry.  It was packed.  There was a line outside the door.  I could see in and was like it won't take so long and it will all be cool.  I was standing in line next to Franciscan Sisters, one I think was a Franciscan of Our Lady of Perpetual Help, so conversation was good.  She asked me if I had ever thought of being a sister and there was still time for me to consider my vocation.  (I'll have to say this is the first time I've ever been asked directly.)  When I got inside, I realized the were curling the line around and there was no way I was going to make it.  So I bailed.  But I was still hungry.
After calling some friends, I managed to locate a fish fry at St. Agatha, the Polish parish, which was straight down Arsenal.  So I ran there and had fish.  If you go, expect to hear people speaking in Polish. Note:  They only had coffee, hot tea, and Polish Beer to drink...

Posted by Tina aka Snupnjake at 9:59 PM