For today's Mass, I thought I would do something special to celebrate the First Sunday in Advent.  I decided to go to the local Polish parish, St. Agatha (Hey, I'm a quarter Polish...).  I attended the 10 am Mass, which is entirely in Polish.

St. Agatha is a personal parish rather than a territorial parish.  I imagine when it was first established there were many homes in the neighborhood.  Now the parish is hemmed in by Anheuser Busch Brewery and Interstate 55.  There were only about 75 people at Mass, in a Church that holds most likely 500.

There was a choir accompanied by an organ in the choir loft.  I think the organ has a bell setting or the choir played bells because one song had bells, but it sounded more like a carillon (which Iowa State University has...totally awesome...especially playing say Jump by Van Halen...but I digress).

I wish I could tell you the normal details of the Mass like if Father adlibed or what Eucharistic Prayer was said or what was even sang.  I can't.  The whole Mass was in Polish.  Everything.  The only words I recognized were "Amen" and "Alleluia."  I know see the value of one liturgical language (Latin) for the Universal Church.  It must have been so comforting to immigrants who were in a strange land with a strange language to know that at least they understood what was going on in Mass.

I have a suspicion that the Polish liturgy, that is the liturgy approved by the Polish bishops, is different from the liturgy approved by English speaking bishops.  It seemed that the Introductory Rite today was much longer than it would be in an English speaking parish.  We didn't sing the Gloria or anything I could recognize as the Gloria.  During the Liturgy of the Eucharist, there was more bell-ringing than at the Consecration.  Father sang the Opening and Closing Prayers and the Preface to the Eucharistic Prayer.  The congregation sang the responses to the Prayers of the Faithful and the Our Father.

I was kind of surprised that the Advent Wreath wasn't blessed at the Mass.  That was the part I was looking forward to.  I was wondering if the candles would be purple and pink, or red like German wreaths (I'm still looking for why the Germans use red.)  The candles were purple and pink.  We didn't sing O Come O Come Emmanuel either.  I'm pretty confident I can recognize that melody regardless of language.

I was shocked! when at the Agnus Dei (Lamb of God) the server came down and shut the gates in the altar/communion rail.  Communion at St. Agatha is old school, like at St. Francis de Sales.    Everyone, who chose to receive, knelt at the rail and received on the tongue.  I have to say, receiving in this manner is a different experience.  Additionally, at the end of Mass, about half the congregation stayed to pray.  It is such a different feeling not to have people rushing to get out of Church, as if an extra 5 minutes in the building might cause them to burst into flames or something.

Pictures:
(I don't have as many pictures as I would have liked...they turned the lights off 5 minutes after Mass and it was really dark in the Church.) 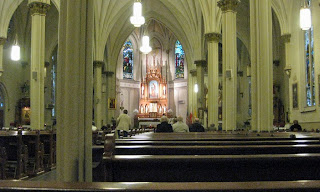 It's interesting people either sat in the front or in the way back,

not in the middle. 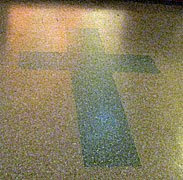 Cross on the floor, right in front of the altar gates.

I saw pictures of Sean Cardinal O'Malley consecrating a Church,

and there was a big sand cross in that Church right where this one is.

I wonder if that is why the cross is here.

Window in the Sanctuary

Noah after the flood. 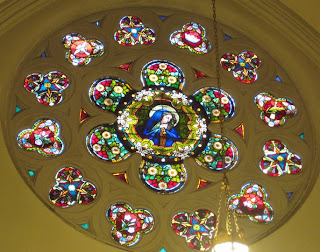 The windows surrounding her are flowers and other symbols of Mary. 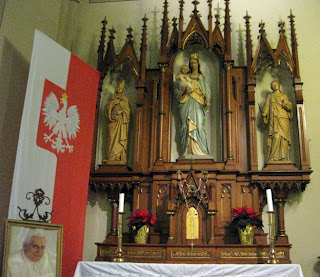 That's a rosary hanging in front.

And a Polish Flag. 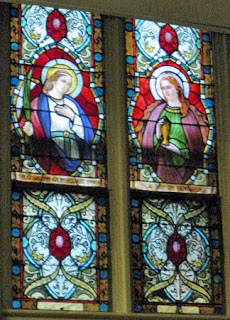 This is the last window on St. Joseph's side.

The top half is covered by the choir loft.

I think it is  St. Agatha and St. Barbara.

I'm thinking the saint on the right is St. Barbara because she is holding a chalice,

and she is the patron saint of brewers as St. Agatha is surrounded by breweries.

Their names are in the halos but it's a bad photo.

At the bottom is the name of the donators of the window.

Photos from Rome of the West

Posted by Tina aka Snupnjake at 2:31 PM