St. John Bosco was built in 1974.  There are only 2 stained glass windows, one above the sanctuary and one above the doors.  There were other windows but they were clear and small, except for the ones at the top which were semi-circles.  The Church is a square shape, with the corners pushed in.  The pews are fanned out in the nave.

The music at Mass was accompanied by an electric guitar, bass, flute, cello and a full drum set, along with a choir.
The music:
Gathering:  For You Are My God
Offertory:  You Are Near
Communion:  Blest Are They
Recessional:  We Are Called.
In August 2008, the Vatican issued a directive asking that "Yahweh" not be used in songs at liturgy.  The song "You Are Near" used to start off with Yahweh.  The hymnal has changed the words to reflect this directive.  The choir was using older music.  It was odd to hear the people singing O Lord and the choir singing Yahweh.
Okay.  I'm all for drums and such in Mass.  I draw the line at beating the drumsticks together, to get everyone on the same beat, at the beginning of each piece of music.  We are not at a rock concert, no matter how much we might wish it.

The homily was kickin'.  Father definitely had his delivery down.  Father started off talking about St. John Bosco, his life and the lessons we can learn from him.  He used this to transition into the discussing the 2nd reading, about how God loves us and we desperately need to hear that.  Father talked about how education, while important, wasn't the be all end all, that imagination was important.  You could be the most educated person or have lots of achievements but without love, your life is wasted.  You need love in your heart.  God is love.

Before the Intentions, the candidates for Confirmation were presented to the parish and Father.  The candidates and their sponsors promised a variety of things such as learning about our Faith and for the sponsors, being good witnesses to our Faith.  Father gave a little talk about what it meant to be Confirmed and then blessed the candidates.

At the Intentions, parishoners had a chance to add their own intentions for the parish to pray for.

Finally, I have to mention the two boys (~10/11 and ~8/9) that sat in the pew in front of me.  I understand Mass is a drag sometimes and all that standing and kneeling can get tiresome.  But really, you can't put your books down and pay attention to what is going on?  Perhaps had they been theologically bent, such as Mass books or Saints' lives, I wouldn't have minded as much.  One kid was reading Pendragon, the other was reading The Haunted.  Not exactly what I'd call Mass appropriate material. 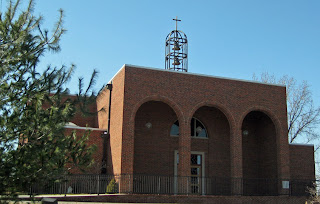 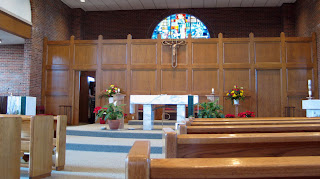 View from the er Middle Pew.
I did take a shot from the back pew but there were people,
so you could see the altar.
Nor could you see the rocks that were scattered around the sanctuary. 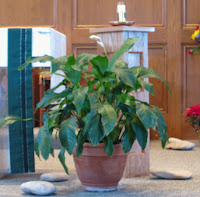 Yes.  Those are rocks.  That is the altar to the left..
I have no clue why. 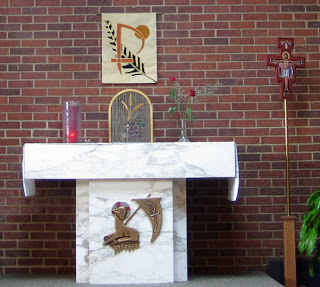 Side Chapel with Tabernacle. 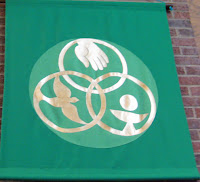 Banner next to side chapel.
I'm thinking this represents the Trinity.
God's giving us a high five cause we are awesome.
They had another banner with a fish escaping, but alas
it is too blurry for even photoshop to fix.

Mary and Joseph
From the back corner, it looks like Mary is trying to hold Joseph's hand.
But he's a guy.  With a hammer. 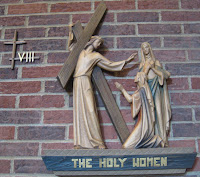 Above the Doors
It says "The Peace of the Church"
Links:
St. John Bosco Website
Stained Glass Window from Rome of the West.

Also!  Remember this Wednesday is the Feast of St. Blaise!  Don't forget to go to Mass and get your throat blessed! Which means, there will be a special mid-week report :).
Posted by Tina aka Snupnjake at 5:55 PM