For Mass this Sunday (8/29) I attended the 11:15 am Mass at Immaculate Heart of Mary in New Melle, which is near Weldon Spring and Busch Conservation Areas.  For pictures of the old church, see this post!

Immaculate Heart of Mary (IHM) was founded in 1945 with the present church being completed in 2003.  If you go to the parish website, you can see a youtube of the construction of the new church.  IHM sort of looks like Christ, Prince of Peace.  I really liked the stained glass windows, however, I was totally wrong in what I thought the windows were symbolizing, something I'll talk about when I show you the windows.

The music was accompanied by a cantor and a piano.  There is an organ which was used for the Mass settings.
Opening:  Change Our Hearts This Time
Gloria:  The one with Sing Glory To God in the Highest
Responsorial Psalm:  Psalm 63:  My Soul is Thirsting For You (listed as a viable alternative)
Offertory:  Prayer of St. Francis
Communion:  Be Not Afraid
Closing:  Companions on the Journey

At the beginning of the homily, Father attempted to get all the people sitting in the back pews to move to the front pews.  Needless to say, he was unsuccessful and said we are all "Good" Catholics.  (Note:  Good Catholics sit in the back...why it pays to come to Mass on time).  As Father reflected on the Gospel he had a few questions:


Jesus is trying to point things out to those that are observing, not necessarily participating.  Notice how we are creatures of habit.  We look to help those that are just like us.  Who is observing us?  (CIA, FBI, etc...oh and God).  God sees us as dirt.  We forget we are created from dirt.  There is no such thing as a self-made man or woman, God has created us.  God makes high quality.  We think we are being good to God by praying.  God doesn't need our prayers.  Father referred to the preface for today.  God doesn't need our praise.  But the praise is how we grow in grace.  All throughout Luke, God is shown as the Good Samararitin, the Good Host, etc.  We need to be grateful and treat others as God treats us.  We have been given an invitation to risen life; we need to take that invitation.
Father used Eucharistic Prayer II and there were bells.
Pictures: 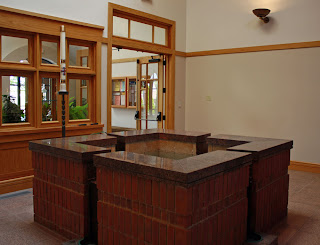 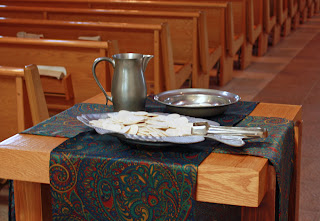 I've seen it at weekday Masses were they have
those receiving place a host in the dish.
Never at a Sunday Mass.
And because there were multiple entrances,
this was at every entrance. 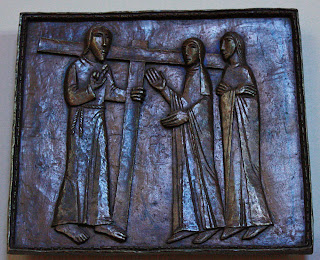 The Eighth Station
(I Think...) 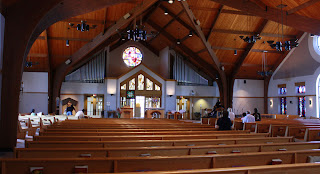 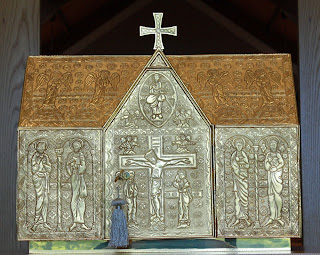 Tabernacle
It's in the area behind the altar,
which has been turned into a little chapel of sorts. 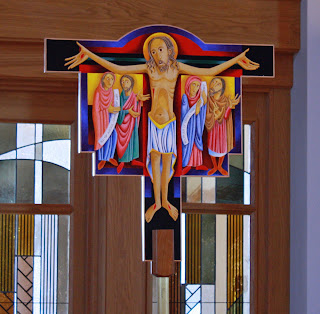 Wut?
I just hangin here..
Not really prominent.
But it all cooool.
I hip with the Spirit.

Mary with Baby Jesus.
Every baby should have a model church to play with.
That model is the St. Joseph Chapel!

St. Joseph, Patron of the Universal Church
He's hold St. Peter's
Pictures:
Left Side of the Altar:  The windows on the left side of the altar represent Mary's various titles and are taken from the Litany of Our Lady of Loreto (litany).  I actually liked these windows even though I had no idea they represented Mary.

Morning Star (My absolute favorite! I loved this)
Our Lady, Queen of the Angels

Ark of the Covenant
Gate of Heaven 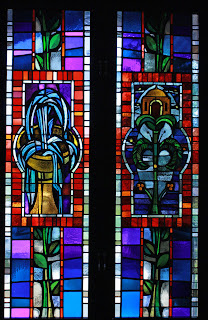 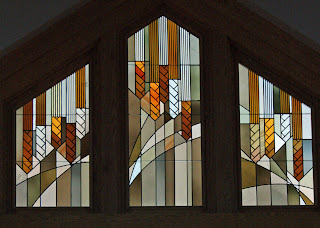 Wheat
Behind the Altar
Entrance to the mini Chapel
No grapes anywhere though. 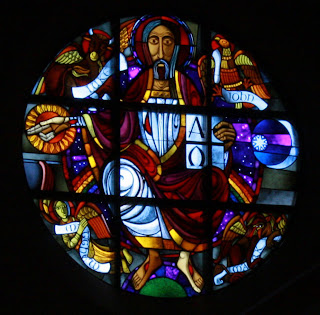 OO!
It's God sitting on a Rainbow!!
Uhm actually not.
It's a window known as the Majestas Domini
It's Jesus.  But Jesus doesn't have grey hair...
He's surrounded by the symbols for the 4 Evangelists. 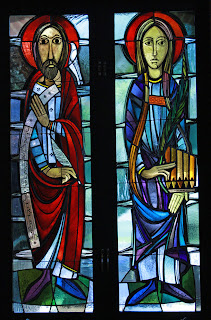 Pope St. Gregory the Great and St. Cecilia
Found next to the choir area
Why does St. Gregory have 2 different colored shoes?
His pallum has Gregorian chant notes on it.
I find it highly ironic the promotor of chant, the Pope they named
a form of chant after, is one of only two saints featured in a church
that has most likely never has chant in it.
Left Side of the Church:  When I first saw these windows, I thought they represented the Holy Family and saints.  I wasn't sure which saints because I'm not familiar with all the symbolism.  It turns out these windows represent various documents from the Second Vatican Council.  I've only seen a Vatican II window at one other church, St. Justin Martyr.  At the top of each window, is a sketch of a church and a crest.  I have to say upfront I'm floored by this.  Stained Glass windows are supposed to be a way of teaching and passing on the Faith.  Never in a million years would I have guessed they were to represent documents.  Really all the windows did was confuse me, especially since I liked them!  (Note I have some close ups if you want to see.  I can post to flickr.)

At the Top:
Basilica of St. Louis, King of France
Crest of Cardinal Ritter
I was rather surprised it was the Crest of Cardinal Ritter, given that it was
Cardinal Glennon who founded the parish.
However, Cardinal Ritter was a Vatican II Council Father,
so in terms of the windows, it makes more sense.
I had no clue.
On the Left:
Dignitatis Humanae:  Decleration of Religious Freedom
On the Right:
Apostolicam Actuositatem:  Decree on the Apostolate of the Laity

At the Top:
Immaculate Heart of Mary - New Melle
(seriously.  Well aren't we special)
Crest of Cardinal Rigali
On the left:
I thought it was a Saint who built churches.
There are so many.
No.
Gaudium et Spes:  The Church in the Modern World
(which my traditional friends tell me is responsible for puppets in Mass & the groovy music)
On the Right:
I couldn't figure out why there was a Star of David,
A Star and Crescent,
Taoist Symbol (??),
a Wheel (Buddist?)
There's no Cross/Crucifix.
It's to represent
Unitatis Redentegratio:  Decree on Ecumenism
(Right:  Protestant looking churches, Protestant looking vestments,
Protestant Music
Weakening of Catholic Identity.
We are so ecumenical.)
I have seen it all with these windows.  I am now immensely curious as to why these 8 documents.  Are these the documents that are the most important or the ones easily bent to suit our own needs/desires/wants/wishes.  I get they chose the 4 Constitutions, but why did they choose those decrees and declarations?  I'm also curious as to why you would immortalize something that could be changed.  Maybe I misunderstand what an Ecumenical Council is, but I thought that if the Council wasn't messing with doctrine, or Faith and Morals, it could be changed at anytime.  So for instance, if Pope Benedict XVI called a council about say music and the council decided that Rock and Roll was the best for liturgy (ahhhh what a sweet dream) a future Pope could call a council and change it back.  It's not like they are changing a teaching such as the Immaculate Conception.   I also love how the bulletin discusses how Dignitalis Humanae was the greatest accomplishment of the American Church.  I'm glad to know that I didn't attend a Roman Catholic Church but an American Church this morning.  Cardinal Ritter may have been a primary crafter of the document, but to suggest it was the American Church responsible for this is rather making us seem full of ourselves.  Hubris?  It seems not very collegial.  The poor Holy Spirit gets no respect.
I'm just wondering what was so wrong/uncool/traditional about continuing to have windows representing Mary's various titles, like Refuge or Sinners, Comforter of the Afflicted, or Mother of the Church (they seem to like churches at IHM)?  It could have been really cool to have an entire litany in windows.

Links:
Website of Immaculate Heart of Mary - New Melle (You can see a slide show about the windows.)
Two pictures from Rome of the West
Posted by Tina aka Snupnjake at 12:31 AM