Happy Feast of the Assumption!

For today's feast, I headed out to New Haven to Assumption.  New Haven is on the Missouri River and is a cute little town which is being transformed into an arts district.  Assumption is on the top of the bluff and was built in 1923, but the parish is much older.  I attended the 10 am Mass.

When I got to the Church, all of the lights were off except for a red spotlight behind the Crucifix.  The parish was busy praying the Glorious Mysteries of the Rosary.  As parishoners arrived, they would join in. I'm all for praying the rosary as a group, but they were praying it so fast, I couldn't really keep up, especially when it came to the Hail Holy Queen.  I didn't think the object was to pray the rosary as fast as possible....

The music was accompanied by an organ, with the choir in the choir loft.
Opening:  On This Day, O Beautiful Mother
Offertory:  Beautiful Savior
Communion:  Instrumental of Hail Mary, Gentle Woman
Closing:  Hail Holy Queen

Mass was incredibly reverent (It was almost too reverent...).  The boy server was in a cassock, while the girl was in a robe/alb.  There were patens at Communion.  Father said Mass standing behind the altar and used the full Penitential Rite.    Father used Eucharistic Prayer I with the Consecration and Final Blessing in Latin.  There were bells at the Consecration.  One thing I've noticed lately, is that when the parish is more reverent, the more likely the Responsorial Psalm and Mass Parts are spoken rather than sung or chanted.   I much prefer singing the Mass Parts.  And I really don't like skipping the Alleluia because nobody wants to sing it.    Shockingly, no one left until Father processed out.  I did find out the parish has a Latin Mass Wednesday Mornings at 7:30 am.

During the month of August, the Archdiocese seems to focus on the Missions.  Yes, the Archdiocese sends priests out to the Missions.  And yes, there are still Missions.  You can find out more about them here.  At Mass, the homily was given by an Augustinian Missionary (this is a first...I've never seen an Augustinian...looks just like a regular priest :) ), who worked in Peru and Bolivia and talked about his experiences.  According to him, the Roman Catholic Church is the number one provider of both spiritual and material needs in some of these areas.  Father talked about how there were 80,000 parishoners and 4 priests.  He talked a great deal about doing spiritual and corporal works of mercy. 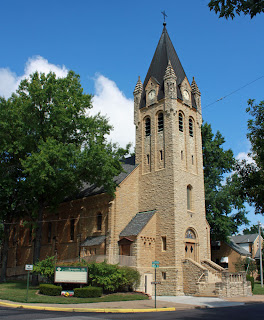 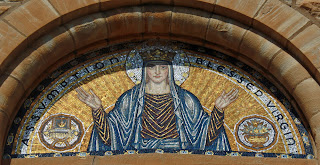 Assumption of Mary Mosaic
Above the Front Door

Window Across from Crucifix in Vestibule

Chalice
Next to the Holy Spirit Window 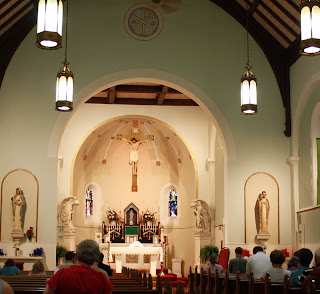 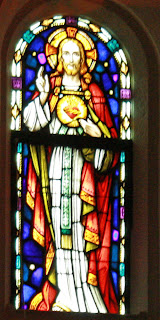 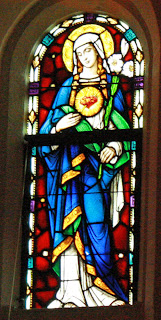 Stained Glass Window in the Nave 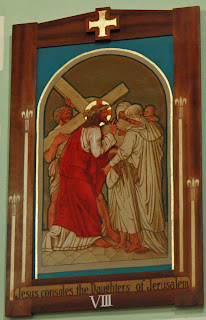 The Eighth Station:
Jesus Consoles the Daughters of Jerusalem
Links:
Information from the Archdiocese
I stopped by a totally awesome winery on the way back to St. Louis and met a fan!!!!
Posted by Tina aka Snupnjake at 11:31 PM