This weekend was the Festival of the Little Hills in St. Charles, so I wanted to go to a Church nearby.  I had wanted to go to St. Peter which is in old St. Charles, but they are in the process of restoring their stained glass windows so I decided I would come back when they were all complete!  I had planned to go to St. Cletus for Lifeteen, but I managed to finish at the Festival in time to go to 11:30 am Mass at St. Robert Bellarmine.  (Someone asked how I picked churches, so I thought I'd share a bit of the thought process).

St. Robert Bellarmine was built in 1964 and is decorated in a style reminiscent of that time.  There were lots of browns, reds, and oranges.  The stained glass windows were more symbolic and there were only 2 statues in the nave/sanctuary of the Church.  The tabernacle was off to the side in a little chapel like area.

The choir area is off to the side as well and is about in the middle of the nave.  The music was accompanied by either the organ or the piano, depending on the piece.
Music:
Opening:  Gather Us In
Offertory:  Eye Has Not Seen
Communion:  In Perfect Charity and Shelter Me O God
Closing:  Church of God, Elect and Victorious (Same tune has Alleluia Sing to Jesus)

Father's homily started off by asking if we really meant what we just said "Praise to you Lord Jesus Christ" Not everyone is going to get into Heaven.  It's God's judgement as to who gets in, not ours.  It's not about having Faith, but about how you live.  Every one has been redeemed, but not everyone is going to make it.  What is your response?  How have we built the Kingdom of God?  How have we lived and brought other people to God?  (How many converts do I need???)  It's not about being nice (WOOT!  I'm in!).  It's about being a follower of God.  You can't go to Heaven alone (Uhm...I'm taking Jake.  Thanks)  You have to make a difference in someone's life.  Only God makes the judgement.  We only have the hope of being saved.  Are we known by God?  We have all kinds of freedom; it's about how we respond.  God is demanding.    I really thought this homily could have been summed up by "There is no try, only do" from the Gospel according to Yoda.

Father did some adlibbing here and there.  I noticed in the Eucharistic Prayer where you pray for the Pope, Bishops and clergy, Father added and ministers.  We are now praying for Protestant ministers?  Wut?

Father used Eucharistic Prayer II and there were bells at the Consecration.  There was hand raising at the Our Father. 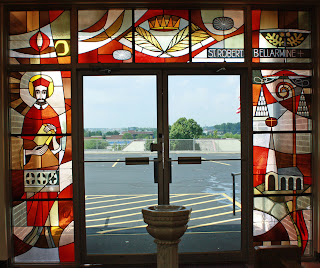 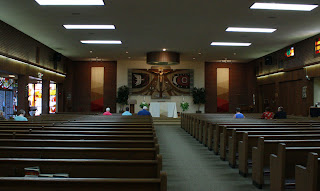 Close Up of Sanctuary Wall 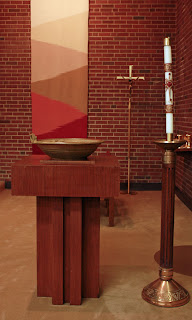 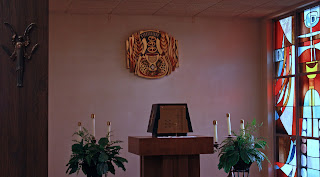 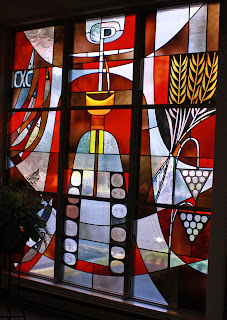 The Last Supper
To the right of the Tabernacle 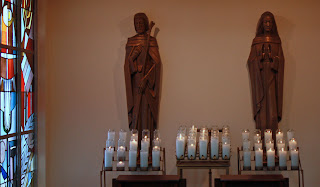 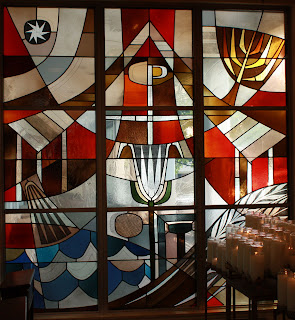 I'm not sure.
I see waves.
To the Left of St. Joseph and Mary 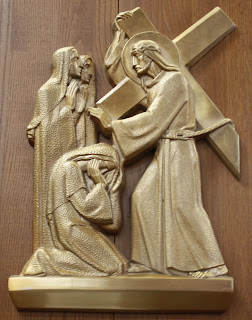 Think this is supposed to represent St. Joseph

Palms?
It was next to the Saw window in a little prayer area/cry room

Windows in the Choir Area

These windows ran along the top of the nave.
I'm not sure what they all represent.

Burning Bush?
Tree of Life?
The window is dark on top because of an overhang. 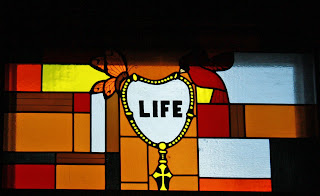 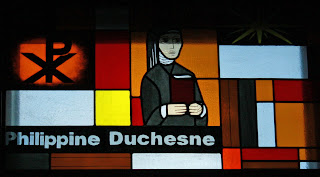 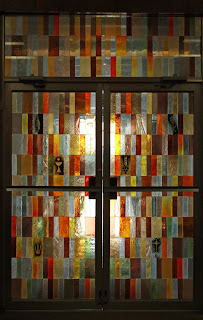 Door
It has all sorts of symbols.
Links:
St. Robert Bellarmine Website
One photo from Rome of the West
Posted by Tina aka Snupnjake at 11:40 PM