Hello!
Did you know that June is traditionally dedicated to the Sacred Heart (neither did I).  Because of this, I'll be visiting parishes named after the Sacred Heart.  This week, I visited the 10:30 am Mass on June 13, 2010 at Sacred Heart in Florissant.

Sacred Heart is an old parish and the buildings are listed on the National Historic Places Register.  Sacred Heart looks like a Catholic Church on the outside.  I was all excited to go in, until I actually got inside.  The interior is very utilitarian, although tasteful.  The windows can't be the original windows.  They are the blue glass that was popular in the 1950s.  What bothered me was the blue glass was all square with squarish designs.  The window frames/openings are those that you see typically in gothic churches, with the tapered or arched tops.  The panes of glass didn't fit well in the openings, in terms of artistic feel.

The choir for this Mass was in the choir loft and accompanied by the organ.  This is not the case for all the Masses.  The 10:30 am Mass ran longer and the musicians for the 12 pm Mass started setting up in front ASAP.  There were maraccas and the music is more contemporary (First song on the song sheet:  Here I Am to Worship).
Opening:  Gather Us In
Offertory:  Instrumental and The King of Love, My Shepherd Is
Communion:  Table of Plenty
Recessional:  Lift High the Cross

Apparently, today was Missionary Sunday.  The bishop of Bangladesh gave the homily, discussing his ministry in Bangladesh and the hardships the people faced.  He spent time talking about education.  Actually, I'm not sure what he was talking about most of the time.  I tried to pay attention...I really did, but between the acoustics in the church, the children, his accent, and my crankiness, I didn't get much out of the homily besides education.  Oh and they don't have enough priests.  (It lasted in the neighborhood of 20 minutes).

I thought for Missionary Sunday, there was a second collection.  There wasn't one today.  Maybe next week?

Father used Eucharistic Prayer II and there were bells at the Consecration.  The wine was consecrated in a big glass jug and then poured into the cups. 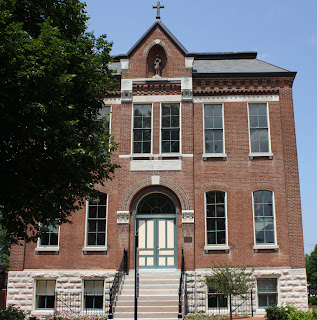 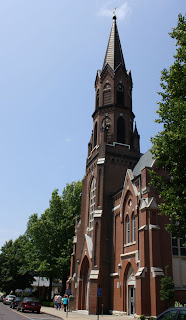 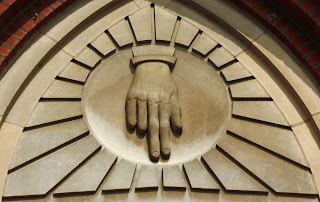 You Are Here.
(I think it is supposed to represent the Trinity.) 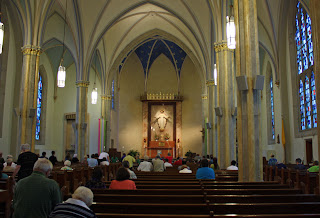 View From the Back Pew
(the Crucifix is off to the side.  There is also a tiny one under the Jesus)

Close Up of Some of the Window Panes
Not sure what the Oak and Ax represent.
There was also a Tiara for Pope John XXIII, the Crozier Pope John Paul II used.
Also something for the Year 2000 and a lion.
Nothing for Pope Pius XII and Pope Paul IV.. 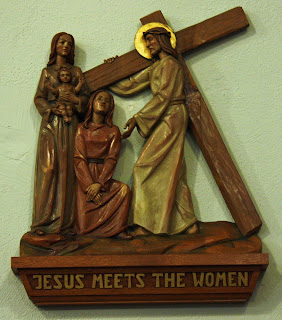 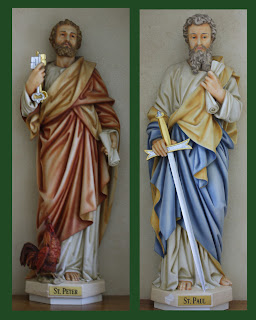 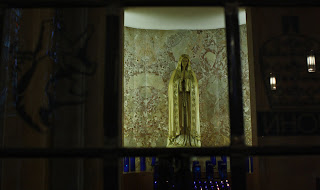 Mary
Links:
Sacred Heart Website
Pictures from Rome of the West (It is featured in his book ;) )
Posted by Tina aka Snupnjake at 10:33 PM