I vaguely remember as a child around 10 going to my Oma's house who lived on the Hill (the Italian area of town) to watch some religious procession.  I think it was the Corpus Christi Procession.  I remember being totally disinterested in it at the time.  I'm sure it had to do with them not allowing people to park on the street so we had to walk and I probably had to carry either my sister or my sister's stuff (who would have been a toddler).  That or I just didn't get it at the time.  I seem to remember it being a big deal though.  Therefore, when I saw that St. Ambrose was holding a Corpus Christi Procession I was totally there.

I have to say, us Italians do it right.  Out of the three processions I walked in, this was the best.  The feeling of the neighborhood was much different as well.  The Cathedral is in the Central West End, an area of town that isn't especially Catholic.  At one point during the procession, someone slammed their front door as we processed by.  Some drivers were irritated by the closed streets.  There were lots of strange looks directed at us.  It was rather an uncomfy feeling.  At the procession in Ste. Genevieve, it was rather low key.  Some of the tourists looked a little confused.  For the procession at St. Ambrose, people came out to meet us on their porches or gathered at the different altars.  Flags, Italian and American, were flying from houses.  It was a much more cheerful, somber mood.   Even better, there were cookies and water afterwards!

As the Blessed Sacrament processed out of Church, we sang Pange Lingua. 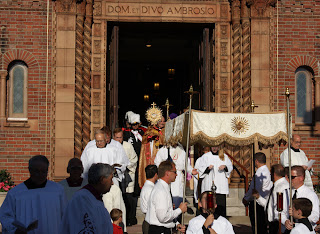 Front of the Procession 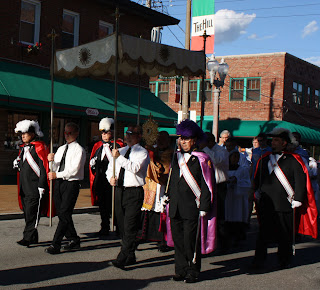 From the Church to the First Altar, we recited the a decade of the Rosary and sang To Jesus Christ Our Sovereign King.  When we arrived at the Altar, we sang Tantum Ergo (in Latin) and then said the Benediction prayers in a mix of Italian and English. 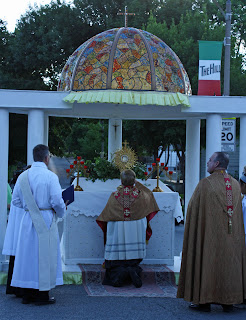 The First Altar
From the First Altar to the Second Altar we said two decades of the Rosary and sang Make Me A Channel of Your Peace and Praise to the Lord. 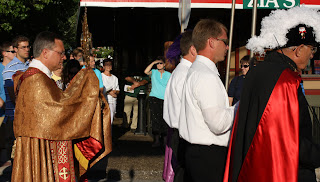 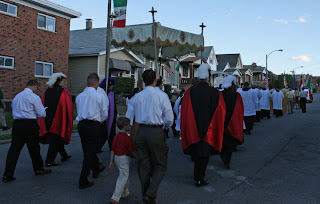 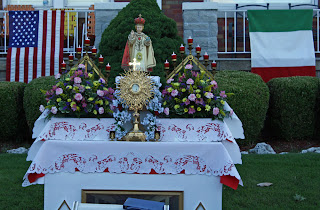 The Second Altar
At this Altar, we sang T'Adoriam Ostia Divinia (Latin?  Italian?).  There was Benediction at each altar.  As we processed to the Third Altar, we said the fourth decade of the Rosary and sang Holy God We Praise Thy Name. 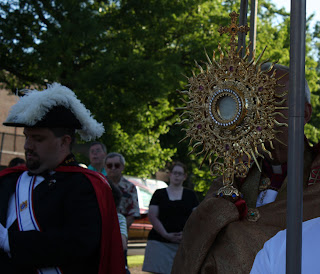 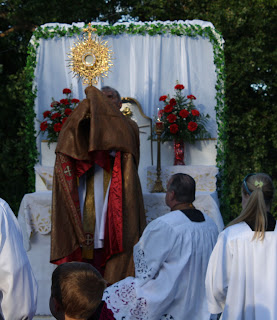 Benediction at the Third Altar
At this altar we sang, Vi Adoro Ogni Momento, and had the Benediction.  From here we processed to the Church saying the fifth decade of the Rosary and finishing the Rosary.  We sang God Father Praise and Glory and Pange Lingua.
Once in the Church we sang Mira Tuo Popolo  and then said the Divine Praises in Italian.  The festivities ended with Laudamus Te. 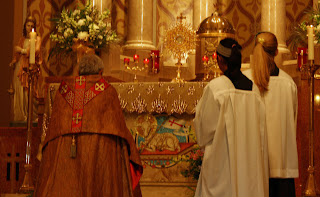 The Best Picture of the Day.

Links:
Pictures from Rome of the West
Posted by Tina aka Snupnjake at 10:59 PM