Happy Father's Day to all the fathers and spiritual fathers (aka priests)!  Hope you are having a great day in the AC.

This morning I drove to where my cell phone gets no reception.  I went to the 10:30 am at Sacred Heart in Elsberry, which I believe is the northernmost parish in the archdiocese.  It was a lovely drive through the flood plain.

Initially, I wasn't sure which building was the church, but I followed the guy in the black cassock and he went into the church.  Father greeted me and inquired if I was Catholic (had a feeling the next question if the answer was no would have been would you like to be?) and if I had moved into the area.  Father told me all about the renovations the parish was undertaking.  The vestibule had been retiled and many of the statues have been refurbished.  St. Teresa is still out being restored but is expected to be back in July.

This church is tiny!  I would guesstimate that it is the size of Cure of Ars.  Father told me the parish numbered about 200 families, which was I though impressive given the church was in such a rural area.

The music ministry was on vacation so Father picked and lead the hymns.
Opening:  Humbly Lord, We Worship You
Presentation:  Lord I'm Not Worthy
Closing:  Faith of Our Fathers
The Holy, Holy and the Lamb of God were both in Latin.  The memorial acclamation was "Keep in mind..."

Father used the full Penitential Rite and worked into the intro about failing to obey/respect one's father.  Father sang the opening prayer and the entire Liturgy of the Eucharist.  The Our Father was sung.

Father's homily was on a topic not often heard in Mass:  the value of suffering.  I was rather expecting a sappy homily about fathers (It being Father's Day and all) but was pleasantly surprised.  Father asserted that many people don't understand and even avoid suffering.  For Christians suffering has meaning.  There is a purpose to our suffering:  it can be offered up for ourselves, others or for the conversion of others.  (I'm having flashbacks to Catholic grade school!)  The Stations of the Cross are hung in every Catholic Church to remind us of the suffering of Christ; what He did for us.  People think Jesus takes away suffering.  That's not quite true.  We need to offer up our suffering and unite our suffering with Christ's suffering.  We need to offer up our suffering to convert the World.  Father then spoke about carrying crosses.  What about those that are not suffering?  Those who are not suffering are called to assist and help the suffering in ways they are able.  Father then moved on to talking about Fathers and how they head the domestic church and they need to pray for the Lord's blessing.  Father then blessed all the fathers at Mass (about 1/2 the people).

Father used Eucharistic Prayer II and there were bells throughout the prayer.  Father was very reverent throughout the whole Mass.  There was a chalice veil and Father purified all the chaliced himself.

Everyone was so nice and friendly.  Normally, when I visit a church I kind of blend in with the scenery and no one really takes much notice.  Father was very enthusiastic about my visit and shared the blog address with everyone at the announcements. 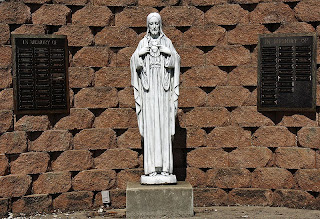 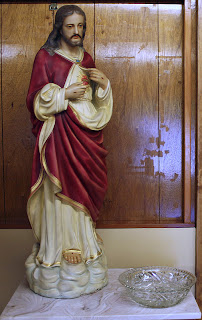 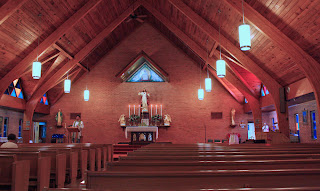 View from the Back Pew
(that's Father at the ambo) 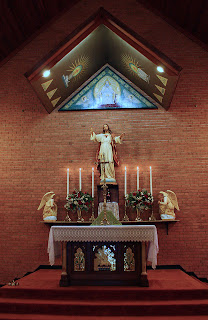 Altar Area Close-Up
Note the chalice veil and the crucifix on the altar!
Father informed me he had the angels and the Sacred Heart statue
refurbished.  They look marvelous. 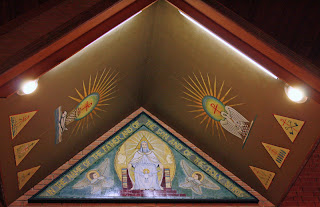 Canopy close-up
It says "In the name of the Father, and of the Son and of the Holy Spirit"
There's a fish on the left and a pelican on the right. 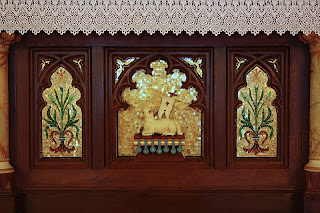 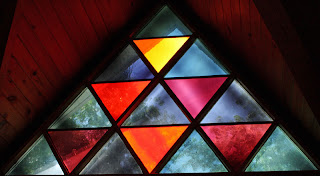 Window near the sanctuary 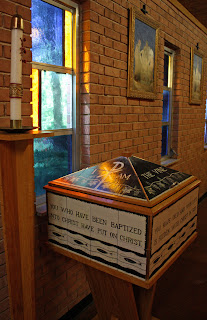 Easter Candle and Baptismal Font
I rather like this font.
I think if you are going to do a modern font, do it like this.

St. John Vianney, Cure of Ars
(This statue has been refurbished too!) 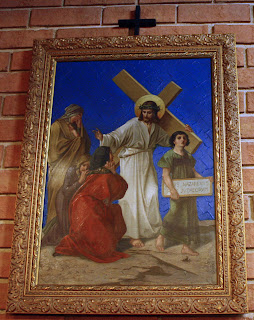 The Eighth Station:  Jesus Meets the Holy Women
Father informed me that these were new and from Czechoslovakia. 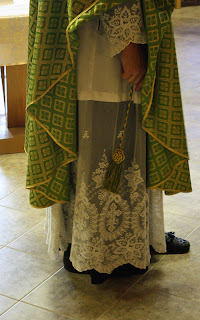 Lace!
Very elusive.
Rarely seen outside of the Cathedral Habitat.
Links:
Sacred Heart Webpage
FYI:  Sacred Heart Elsberry Parish Picnic is June 27 (next Sunday)!  You should take a nice drive in the country and have chicken and cole slaw.
Posted by Tina aka Snupnjake at 3:16 PM