As I was looking for a Midnight Mass, I discovered that St. Dominic Savio had a Holy Hour midnight Mass on New Year's Day.  I was highly intrigued as I had only heard of a New Year's Eve church service in connection with African-American churches, as it is called Watch Night to await/celebrate the Emancipation Proclamation.  I decided to go to the Holy Hour and Mass, because I was so curious.  Then I found out there is a plenary indulgence attached to saying the Te Deum (also known as Holy God, We Praise Thy Name Hymn) on the last day of the year.  I was so there.

Before Mass was Holy Hour.  From what I understand, Holy Hour can mean a variety of things.  It could be a structured or unstructured prayer setting.  It almost always seems to involve Adoration and Benediction.  The iPadre sometimes streams Holy Hour from his church. (Link to his U-Stream) Needless to say I haven't been to Adoration or Benediction since I was 14.  An hour was a little too much for me (I lie: It wasn't a little too much, it was a lot too much) .  So was sitting by the Baptismal Fountain (the water tinkling over the rocks, splish, splash).  It seems to be much like what I remembered:  Singing "O Saving Victim", "Down in Adoration" (for some reason in Latin last night which was interesting as I tried to sing words I couldn't pronounce...), saying the Divine Praises, and singing "Holy God, We Praise Thy Name" (Yay! my indulgence).  All the singing was done a capella....

The music at Mass was accompanied by a guitar.  The music was Marian focused as it was the Solemnity of Mary, Mother of God.
Opening:  Sing of Mary
Offertory:  Ave Marie Variation, seemed like a litany, with Ora Pro Nobis sung
Communion:  Hail Mary, Gentle Woman
Recessional:  Hail Holy Queen
The Gloria was spoken.  The Responsorial Psalm recommended was Psalm 67:   May God Bless Us With Mercy.  Psalm 98: All the Ends of the Earth, everyone's favorite all purpose Psalm was used instead.

Father provided a crystal clear example of why ad-libbing in the liturgy can be a bad idea, especially at midnight.   Father was introducing the Kyrie, and was mentioning how we are are confessing our sins just like Mary.  Father realized his mistake and tried to backtrack but the damage was already done.  (FYI:  Mary is/was sinless.  Immaculate Conception and all that)  We skipped the Nicene Creed ( :( there goes the plenary indulgence...).

The homily was short.  Apparently Father had a bad 2009 and hopes 2010 is better.  Basically, if the challenges help us have greater Faith, then it is good, as it increases the Gift of Faith.  God is with us.

Father said Eucharistic Prayer 3 and there were no bells at the Consecration.  Father seemed rather in a hurry.  It was 12:30 at Communion.  No Precious Blood was distributed. 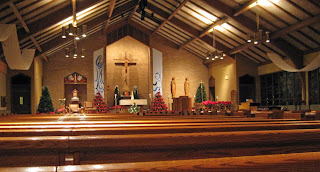 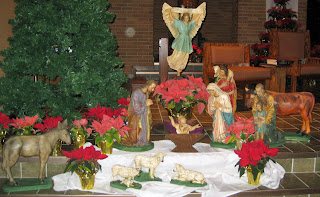 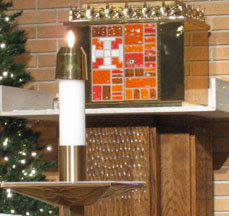 Dear Holy Spirit, I'm sorry everyone thinks you like orange, 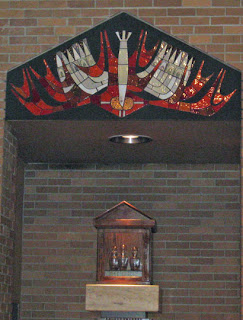 Mosaic of the Holy Spirit

(Sorry, the water's flowing, says fountain to me, not font!) 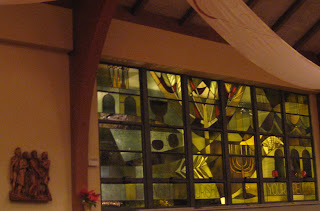 The Windows were mostly symbols

There's a Station of the Cross

Can see the Crosses on Calvary 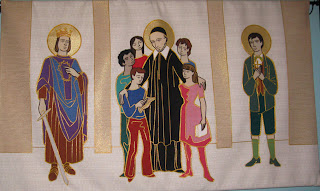 I'm going with (left to right)

Some are suggesting it is St. Vincent de Paul

Links:
Picture from Rome of the West
St. Dominic Savio Website
Posted by Tina aka Snupnjake at 6:41 PM