Hello all!  Today is the Feast of the Baptism of Our Lord.  The St. Louis Archdiocese doesn't have a parish named Baptism of Our Lord, however, in the traditional calendar, January is dedicated to the Holy Infant and the Holy Name of Jesus (Bet you can't guess where I'm going next week!)

I attended the Noon Mass on January 10, 2010 at Holy Infant.  The Mass I attended was more teen/youth orientated.  There were lots of teenagers and their families.

The music was done mostly by teenagers.  There was a piano and guitars and maybe a bass.  I'm a little disappointed there were no drums.
Instrumental Music before Mass.
Opening:  Come, Now is the Time to Worship
Offertory:  Better is One Day
Communion:  Something I couldn't make out the words to and I Can Only Imagine and some instrumental music
Recessional:  Let the Valleys Be Raised

The Responsorial Psalm was supposed to be Psalm 104: O Bless the Lord My Soul.  I'm not sure what the choir sang.  I couldn't make out the words.  I think it was something to the effect "Give the Lord Glory/Honor Alleluia"

A parishoner informed me that the music is less contemporary at the other Masses.  And yes, I did feel like I stumbled into a Time-Life commercial.  I have no problem with contemporary music at Mass.  I love it.  But is there any contemporary music written by Catholics or must we swipe the Protestant music?  Our theologies are different in some critical aspects.

Mass was standing room only.  The Adoration Chapel was full.  Mass was packed; I'd say somewhere around 700 people.  And it wasn't packed with groups of one or two people.  It was families with 2, 3 and 4 kids.

Also, this Mass we had a seminarian or college student acting as a Master of Ceremonies.

Before Mass, a nice man from the Knights of Columbus came up and spoke about sending roses to our legislators in Washington D. C. to stop abortion.

The homily was about A-ha moments and how Father had one reading the readings for today.  Also that we are in a transition today.  We are transitioning from Christmas to Ordinary time.  Jesus led by example; He prayed and we should pray.  God is still with us even in Ordinary time and our ordinary lives.

Father said Mass reverently.  He purified all vessels after Communion.  Next to the Tabernacle, there was a little container of water; all the EMHC that handled the Precious Body purified their fingers in that.    Father said Eucharistic Prayer 3 and there were bells at the Consecration.

Families held hands during the Our Father.  The Lamb of God had an extra preface, "Peace I leave you my friends and I will be with you until the end."  This was interwoven with the traditional words of the Lamb of God.

It was a nice Mass overall. 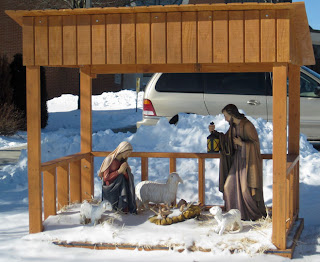 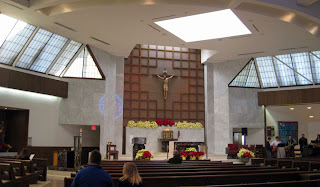 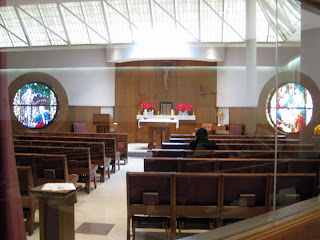 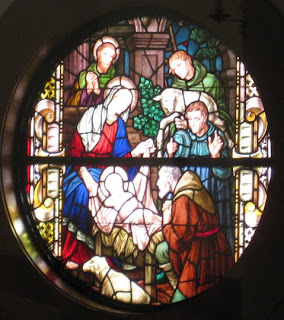 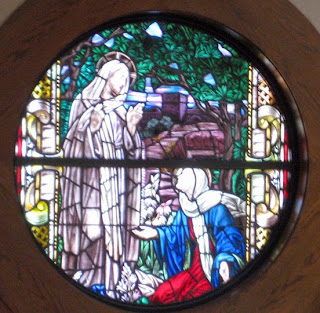 A window depicting the Risen Jesus (tomb in the way back)

and either Mary, His Mother or Mary Magdalene.

This sparked an interesting debate on my social network.

Apparently in art, when red is over blue, it represents divinity clothed in humanity.

When blue is over red, divinity enshrouding humanity.

If you go with Sacred Tradition, it is Mary.

If you go with Scripture, it is Mary Magdalene.

If you go with matches a statue inside the Church, it is Mary. 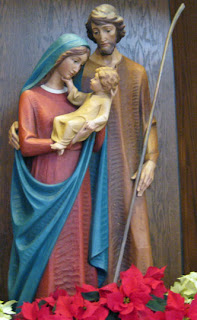 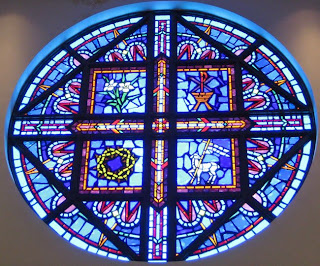 Big Window in the Back of Church

You can see the various symbols of Christ. 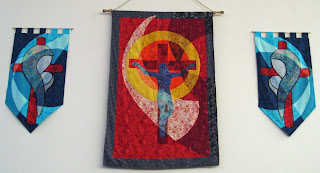 Quilts/banners on the back wall. 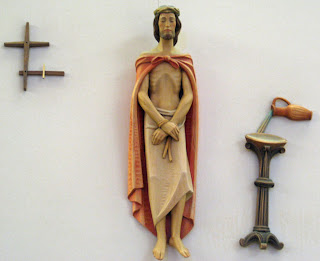 The First Station:  Jesus is Condemned