Mary, Mother of the Church-South County

I'm just going to be upfront.  This was not a happy visit.

For the Solemnity of Mary, Mother of God, I visited Mary, Mother of the Church in South St. Louis County.  It's on a hill and overlooks the Meramec River, practically in Jefferson County.  I attended the 9:30 am Mass.

Mary, Mother of God is a very modern church in a fan shape, with two smallish modern stained glass windows in the front.  I'll let the pictures speak for themselves.

One thing I noticed was the the parishoners were all my parents age, aka baby boomers.  There didn't seem to be any older elderly parishoners.  There were 3 children and one teenager.  I was then the next youngest, maybe by a good 5-10 years.

The music was accompanied by a piano, except for the last song which was accompanied by the organ.  This drives me bonkers.  Does the organ only work for certain songs?  I'd buy it if it was a different person playing the organ than the piano, as not everyone can play an organ.   It seems silly to go through the trouble and expense to buy two instruments that are so similar.

Additionally, on January 1, if you publicly recite (or sing) the Veni Creator (Come Holy Spirit this is pretty close).  No mention of it. :(  I understand that some parishes and priests are not into indulgences.  However, what about my right to receive them?  I shouldn't have to call parishes to figure this out.  This has to be one of the easiest plenary indulgences to get and absolutely nothing was mentioned.

I have to say, this is the first time I've seen adult female altar servers.  I'm thinking I don't like adults as altar servers, regardless of sex, unless they are seminarians.

We have two more firsts for the blog as well!!! Blue vestments!  Which Father kindly modeled for us during his homily.  They are purple on the inside, as he lifted it up over his head for us to see.  The deacon was a wearing a dalmaic with the deacon's stole on the outside.  During the homily, Father mentioned that he wore the blue vestments because it is a Marian feast, the deacon agreed (lesson:  you have the power to stop wrong-doing: use it)  and he felt like it (the lamest excuse ever.)  Now, I don't want to start a debate about whether blue vestments (properly done) are appropriate, cool or whatever.  The fact of the matter is, blue vestments are illicit (read: not allowed) in the United States.  Now there is permission for Spain to use blue for Marian feasts, but this isn't Spain.  I realize 100+ years ago this was Spanish Territory, but I think that is stretching the rules a little too far.  Fr. Z discusses blue vestments every Advent (explains why).

The homily.
One should not tell odd personal stories when there may be complete strangers in your parish.  Father apparently adopted two boys and named them Mickey and Burpy.  Apparently these are gerbils (THANK GOD!....maybe) Anyway he went on about how Burpy was a cool name.    This was followed up with a story about boots that hold whiskey.  Apparently Father's parents were the original green parents.  According to Father, Christmas is a time for stories.  Father then jumped to how tales in the Bible are bookended.  Note to Father:  this is a common literary device in many works of literature and is associated with foreshadowing.  Father talked about how Mary wrapped Jesus in swaddling cloths and later would wrap Jesus in his burial shroud.  Mary had to do it because men just can't put diapers on right.  Next Father spoke about the Circumcision of Jesus and how it is like Baptism.  Jesus bled at the Circumcision just like he will bleed for us on the Cross.  God seals the deal with us.  There won't be a New Covenant.  Then Father started talking Abraham and animals sacrificed and being split in half and some kind of covenant coming out of them.  Or that we would be split in half with the covenant if we break it.  Honestly, I was kind of losing it.  I needed a map to keep track of everything.  Then comes the best part.  I have learned that what I learned in 12 years of Catholic school was wrong.  Father informed us that the most important words of the Mass were "Get out of here."  Uhm I don't what missal or Sacremantary (big red priest book) he's using, but I've never heard those words in Mass.  He then said it was the Go in Peace (the final blessing) part and explained but I was so dumbfounded to find out that Sister lied about the Consecration part being the most important words of the Mass I forgot to get his reasoning (or lack thereof).  This homily killed whatever charitable thoughts I may have had about this parish.

Through social media, I have met a variety of Catholics, most of them with a more traditional bent (think St. Francis de Sales)  A frequent complaint I see from them and other Catholic bloggers is that the Mass becomes the Father Star Show instead of the Jesus Show.  Honestly, I thought they were smoking something.  I think of Fr. B and how his love the Eucharist shines through during the Eucharistic Prayer, I think of the priest (and other priests like him) at the Newman Center in Urbana who was so incredibly reverent, or other priests who just don't seem to care or convey it is just a job.  This Mass proved to me they actually may have a legitimate complaint.  The deacon read the Gospel and the intentions very dramatically and reminded me of a Protestant minister.  I can't even describe Father other than I got the feeling it was about him and not about God.  He said the Eucharistic Prayer I very dramatically? showy? I don't even know.  It just wasn't *right*  Update:  A MMOC parishoner has given me some background on Father.  He used to work with the Archdiocesan Deaf Ministry and for that ministry one needs to exaggerate(?), overdo (?) facial and body expression as well as having a speaking style that can be easily lip-read.  This makes perfect sense, as I did go to Mass for the Deaf, which was signed the entire way through, and movements were emphasised :)

Then I got to see first hand my traditionalist friends favorite liturgical abuse.  I'm not sold on that it is an abuse per se, but I can see how common sense (which amazingly shows up in the things we do) would tell you not to do this.  In every other parish I've been in, the wine is poured into the cups for distribution immediately, at the beginning of the Liturgy of the Eucharist.  This makes sense, because if you leave the wine in the big vessel used to bring it up during the presentation of the gifts and Consecrate in the big vessel, you then have to pour the Precious Blood into different cups.  This is a disaster waiting to happen.  First of all, aside from the horror of spilling the Precious Blood, if you pour it before you consecrate it, spilling it isn't a big deal initially.  Also, if you spill one cup, you still have other ones with Precious Blood in them.  If you knock over the big vessel by accident, that is going to be nightmarish.  One cup, eh, not so bad.

Not surprisingly, hands were held across the church for the Our Father. 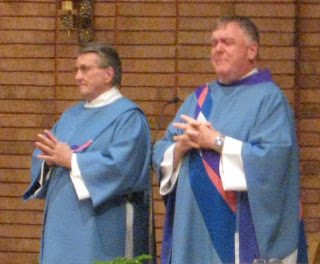 Psst:  If you are going to break the rules, could you have at

I bet these get used during Advent, given the purple and pink ribbon. 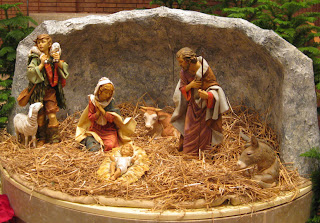 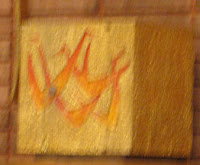 It has V-shaped birds or flames

Sorry about the blurry, but I think it make it better... 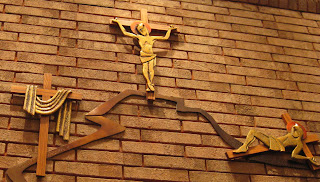 Stations of the Cross

I wonder if they were designed by the same person

who did St. Matthias

There seems to be 7 major symbols; 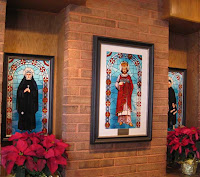 Because putting Saint statues in the alcoves

would have been too much.

Many of their statues are in Archdiocesan Storage (or eBay) 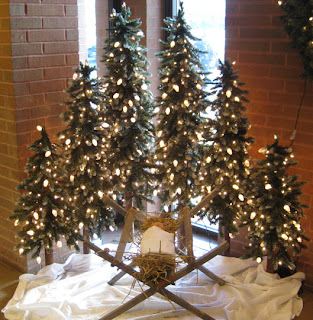 So uhm, which tree is Mary and which one is Joseph? 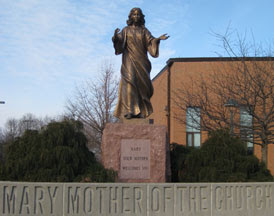 Mary, Mother of the Church

Mary and Baby Jesus have unfortunately been harpooned. 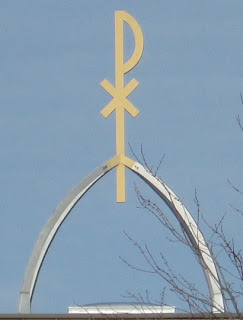 It's the Chi-Ro on the Arch!

Posted by Tina aka Snupnjake at 8:37 PM