January 24 is the Feast of St. Francis de Sales.  However, I've already been to St. Francis de Sales so I looked around for somewhere else. I apologize.  For those of you who go to St. Francis de Sales, the feast day in the 1962 calender is January 29.  See the comment box for details.   Lucky for me, I discovered Immaculate Conception in Augusta had pancakes.  Since the weather wasn't bad, I decided to have pancakes and go to Mass.  They had potato pancakes (WOOT!!!), real big sausages, pancakes, eggs, biscuits and gravy and baked apples.  It was delicious.  Immaculate Conception has pancakes the 4th Sunday of every month.  Since it is in the heart of wine country and is incredibly close to the Katy Trail I recommend, Pancakes, Mass and Wine/Hiking and make a day of it. However, MO 94 is very twisty and hilly and there are no shoulders to speak of, so I recommend going in good weather.  I also got a tip that St. Vincent in Dutzow has pancakes the first Sunday of the month.

When I think of churches in rural areas or on the prairie, this is the Immaculate Conception in Augusta is what I imagine.  I have to say this church is tiny.  It can't possibly hold more than 100 people.

The music for the Mass was accompanied by a piano, an organ (maybe) or a guitar depending on the song.
Sang today:
Opening:  Come, Worship the Lord
Offertory:  Prayer of St. Francis
Communion:  Dwelling Place
Recessional:  They'll Know We Are Christians
The Gloria was spoken.  I didn't recognize the Mass Setting, but the Lamb of God had "offered for us" inserted in.

The homily (which was very short) spoke about how we like to do things our own way and how the media brainwashes us to think this way.  We are people of Jesus, not of the world.  Father went on to talk about how he downloaded a carbon calculator to see how "green" he was.  He then went on to say, wouldn't it be great if there was a "Catholic" calculator and we can see how Catholic we are?  There is!  The lives of the saints and the examination of conscience (links to some are at the bottom) everyday.

Father used Eucharistic Prayer III and there were bells at the Consecration.

After Communion, Father summarized two letters from the Archbishop.  The first was thanking the parish for their contributions to the seminary's Faith for the Future campaign and the second was to inform us of the Archbishop's vision for Catholic Schools.  The most important thing is that our Catholic schools have a strong Catholic identity.

Before the closing prayer, Father invited all the children up and individually blessed them.  (They weren't blessed during Communion time) 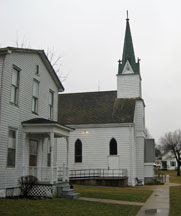 Building in the front, I think, is the old convent.

Above the Front Door 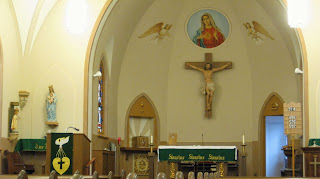 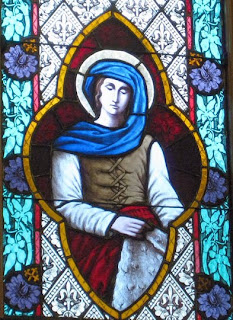 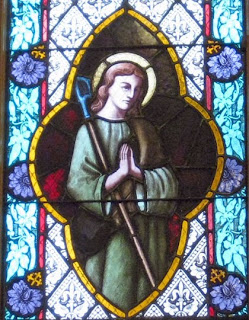 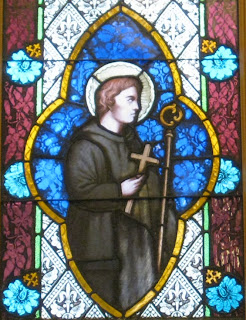 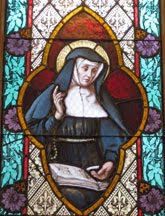 These statues were on the front of the choir loft.

I don't think I've seen this before. 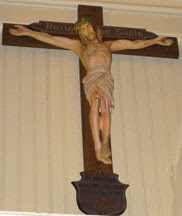 Close up of Cross

The writing on the top I believe is German.

and says "Save Your Soul" (thanks penny!)

On the bottom is HI Mission


Links:
Website for Immaculate Conception-Augusta
Pictures from Rome of the West