Epiphany of Our Lord -St. Louis

To celebrate the Feast of Epiphany (and to get my plenary indulgence :) ), I went to the 11 am Mass at Epiphany in South St. Louis City.

Epiphany is a rather vibrant parish in South City and is roughly middle class.  The church building is in a classic style, but very plain on the inside.

There is a choir loft, but it is not used.  The choir sits on the St. Joseph side of the sanctuary.  The Mass was accompanied by an electronic piano.
The music:
Opening:  The First Nowell
Gloria: Mass for John Carroll with the refrain in Latin
Offertory:  As With Gladness Men of Old
Holy and Great Amen:  St. Louis Jesuit Mass
Lamb of God: Isele (Lamb of God, Emmanuel, Prince of Peace)
Communion:  Child of the Poor/What Child Is This (sang together at the same time)
Recessional:  We Three Kings

There was a family that joined the Catholic Church today (HOORAY!) so Mass was much longer and the Homily incorporated the fact that there were Baptisms and Confirmations.

Epiphany is one of the many parishes that do a Children's Liturgy of the Word.  This involves having the children come up before the readings, receiving a special blessing from Father (or the whole parish)  and they go off to color somewhere.  Epiphany sang a special song for the children as they left.  I have to say that I'm slowly becoming convinced that separate liturgies for children are a bad idea.  First, and probably the least important reason, is that it smack of being Protestant.  Second, you mean to tell me the children can't listen to the Scriptures and Father's Homily?  I don't think it is a matter of understanding, as I've had some homilies that I don't understand.  Children need to learn how to behave in Church, sending them out of Church doesn't model the proper behavior for them.  Third, it is incredibly disruptive to the flow of the Mass.  This ties in with the fourth reason.  Today there were Baptisms and Confirmations after the Homily.  The children were still coloring and did not see the Baptisms.  They were essentially excluded from the community of faithful and participating in this Sacrament.  They came back smack in the middle of the Confirmation Rite.  That's right, while the 5 people were being Confirmed, the children returned from wherever.  This was a shame, because it was disruptive and it denied these children a chance to see what Confirmation is.

Father's homily addressed a variety of topics.  He talked about how the Church is still celebrating Christmas unlike the rest of the world.  Also, that the accounts in Matthew and Luke are different and the small details do not matter, but rather it is the big picture overall that matters.  The story of the Magi illustrates the inclusive nature of God's call.  Father hopes that we will all come to know (and love) Jesus Christ.  Additionally, we need to be challenged in our Faith to keep it alive otherwise it just becomes an intellectual exercise.  Throughout this, Father mentioned how this all connects to Baptism, Confirmation, Communion and Confession.

Next came the Baptisms and Confirmations.  A family of five was brought into the Church.  I have to admit, I'm throughly confused.  Why were they all baptized now and not at the Easter Vigil?  I thought that we had an RCIA program and that adults had to go through Scrutinies and stuff?  I could understand why the children were baptized, so that perhaps they could be confirmed with their classmates.  But they were confirmed today.  The youngest was around 10, so it seemed odd she was Confirmed today, as I believe the norm here is 12-14.  Granted, there are most likely reasons that I'm not privy to.  I'm not saying it was wrong, it just seemed odd, given that the Easter Vigil is 4 months away.

Additionally, I was confused by the proceedings themselves.  Admittedly, the last time I saw an adult baptized into the Church was Easter Vigil around when I was 13.  However, I have been to my goddaughters' Baptisms so I know how that works.  If what I saw today was correct, then adult Baptism is lame, lame and lame.  When an infant is baptized, the baby isn't just dunked or splashed with water.  The baby is also anointed with the Oil of the Catechumens on the crown of the head and on the chest.  There's a phrase about being anointed priest and prophet.  Additionally, there is part about being clothed in Christ and the baby gets a new white garment.  There's an exorcism part too.  Today, the members of the family were just splashed with water while the correct words were said.  No anointing, no new garment of Christ.  Now, granted the family was then Confirmed like five minutes latter, so maybe anointing isn't necessary.  But when you are Confirmed, you are anointed with Chrism, which is a different oil.  I'm all confused.  I will say it seems like combining both Baptism and Confirmation is rather lame.  Note:  I want to make it clear that the Sacraments of Baptism and Confirmation are not lame and a very aweseome.  However, the execution of those sacraments can sometimes be rather lacking.  Additionally, call me greedy or whatever, but if you combine them, that's one less excuse to party and get presents ;)

Father said Eucharistic Prayer III and no bells at the Consecration. 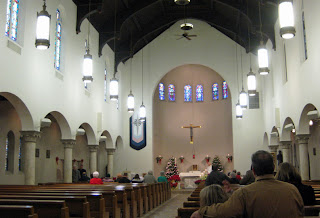 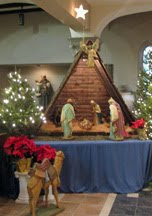 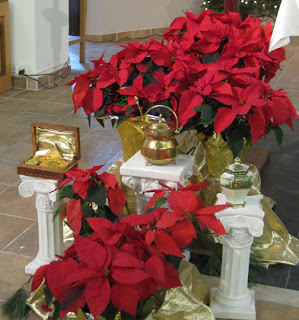 The Gifts of the Magi 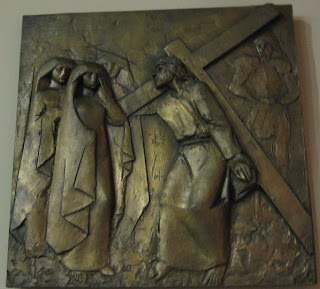 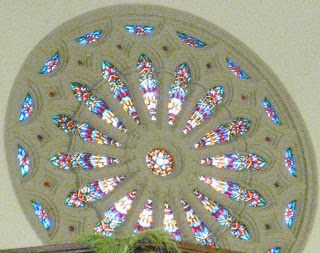 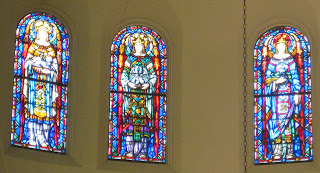 These are some of the windows in the Sanctuary.

They are angels that are holding symbols of Jesus.

The yellow blue angel is holding a lamb.

The greenish one is holding a pelican.

The blue girly looking one is holding leaves.

In photoshop I can only make out the pelicans and lamb

I didn't realize they were angels holding things until I zoomed using photoshop.

The upper windows had various symbols in them.

This one has grapes and lilies. 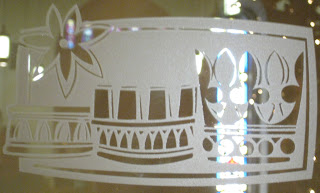 Etching on the Main Glass Doors

Father's Chasuble has these symbols on them,

Links:
Epiphany Parish, information for St. Louis Archdiocese
Exterior photo from Rome of the West
Posted by Tina aka Snupnjake at 3:13 PM