Hi!  Sorry for the late posting.


For Mass on Sunday, January 17, 2010, I attended the 10:30 am Mass at Holy Name of Jesus, in Bissell Hills, which is in Bellefontaine Neighbors in North St. Louis County.


Holy Name is a new parish, being formed in 2005 by a merger of North County parishes.  The current church used to be St. Jerome.  Some the parishes merged to form Holy Name of Jesus were St. Lucy, Corpus Christi, St. Jerome, and Our Lady of Good Counsel.  What I found interesting is that there didn't seem to be any elements from the closed parishes represented.  In other merged parishes, such as Our Lady of the Rosary, there were visible signs of the closed parishes.  I wonder if they just went with kind of a clean slate approach.


Holy Name is the same physical design as Holy Redeemer, which is not surprising given the architect for  both was Maurice Carroll.  The stained glass windows are a different and the sanctuary is also different.  I actually prefer the sanctuary at Holy Name.


There is a very narrow choir loft.  Given the size of the loft and the age of the choir, it is unsurprising that the choir sat in the front.


The music was relatively traditional.  Three songs were accompanied by the organ and one song accompanied by a piano. There was also a flute.
Opening:  Songs of Faithfulness and Praise
Gloria:  Mass of Creation
Offertory:  See Us Lord About Your Altar
Holy, Memorial Acclamation, Great Amen: Mass of Hope
Lamb of God:  Mass of Creation
Communion:  We Are Many Parts
Recessional:  Holy God We Praise Thy Name


There was a Children's Liturgy of the Word.  The children followed a banner out of church after being blessed by Father.


I have to say today's second reading is one of my favorites.


The homily was given by the Deacon and was very nicely done.  Deacon started out with joke which he then wove into the homily at various parts.  Deacon referred back to Epiphany and how today was the third manifestation of Jesus.  Mary believed in Jesus; that's why she asked Him to help at the wedding at Cana.  We need to go beyond ourselves and do what He wants.  It is a challenge to follow Jesus.  What is Jesus asking us to do?  This is where the second reading comes in.


Father used Eucharistic Prayer II and there were no bells at the Consecration.


Before Mass was officially over, Father invited the youth group going to March for Life to come up to the altar to receive instruction and a blessing.  It was quite a large group.  Father spoke about being a witness and politics.   Father gave a blessing to the teenagers (which was awesome), and asked us to raise our hands and bless the teenagers along with him.  This happens at other parishes, with the laity being asked to bless children before they go on to Children's Liturgy.  It makes me feel uncomfortable but I can't exactly say why. I guess it is because to me, it seems priestly, and I'm not a priest.   After some searching and some help from my CLN (Catholic Learning Network), it turns out that it is prohibited by Canon Law 1169.2 and 1169.3 and from De Benedictionibus (Ritual of Blessing), 18c (This is the book of blessing).  This law says that blessings are reserved to ordained ministers.  Ecclesiae de mysterio also says that the laity are not supposed to perform gestures that are priest like.  I really like blessings and I like it when Father brings out the Blessing Book.  However, when I'm invited to do things like raise my hand and bless things, I feel really Protestant for some reason.


It was a nice visit and the parishoners were very nice. 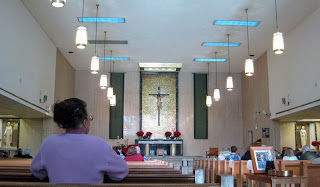 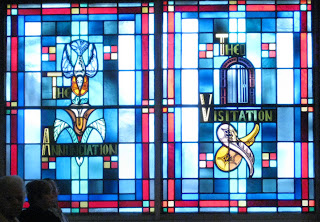 There were 16 windows along the aisles of the Church.

The fifteen original (minus the Luminous) Mysteries of the Rosary were displayed.

The 16th window was a prayer. 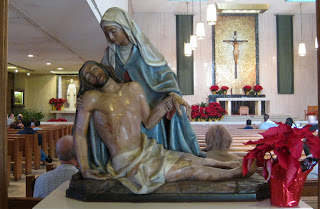 You can see a statue of Mary in the back on the left.

It was three separate windows that I merged into one image.

"I am the Good Shepherd, I know My sheep and My sheep know Me."

"The Good Shepherd give His life for His sheep" 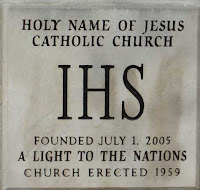 The old cornerstone was bricked up.

Posted by Tina aka Snupnjake at 10:07 PM