Originally, I had planned to visit a Church in north St. Louis City, but with the weather so nice I thought I would drive to a Church in the hinterlands of the Archdiocese.  Then the people with whom I reside with decided they would spend the day in the country.  So I decided to go some place closer, someplace with a pancake breakfast perhaps?  That lead me to St. Matthias, in Lemay.  I attended the 10 am Mass.

The choir was in the front accompanied by an organ and a flute.  There was no choir loft.
There was a song before Mass.
The music:
Opening:  Lift Up Your Hearts
Responsorial Psalm: Center of My Life
Offertory: All God's Gifts
Communion:  In the Breaking of the Bread
Closing:  Lead Me Lord

I'm all for singing a hymn or other song during the Responsorial Psalm, but what replaces what is supposed to be used should at least be based on the same Psalm or one of the suggested replacements.  Today's Psalm was Psalm 146, the song sung was based on Psalm 16, which was not one of the suggestions in the misselette.

The homily was about how some are criticized for giving gifts solely for the Honor and Glory of God.  Father also talked about how we don't really "waste" time coming to Mass, and how it is not a "waste" or "foolish" to become or being a priest, religious or stay at home mother.  It is not foolish or a waste to those with Faith.  Father also mentioned that we add water to the wine before Consecration to represent the people.  Actually, the mingling of the water and wine show in a symbolic way the hypostatic union, the union of human nature and divine nature (Thanks Father Cory!)
.
No processional cross, no consecration bells and Father used Eucharistic Prayer II.

Before Mass ended, there was a Faith for the Future (the seminary campaign) pep talk.  I still need to pledge.... 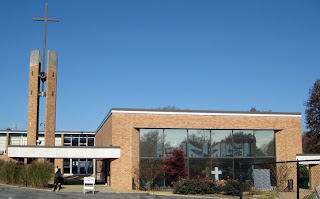 The outside of the Church.

Loudspeakers instead of bells.

The former grade school is attached to the Church.

The parish is celebrating its 50th anniversary this year!

A tombstone to remember the unborn. 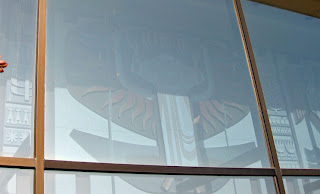 This is the best I could do for what is in the window.

It's either Jesus or St.  Matthias. 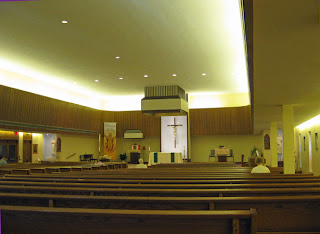 The view from the pack pew!

That's a Year of the Priest banner up front. 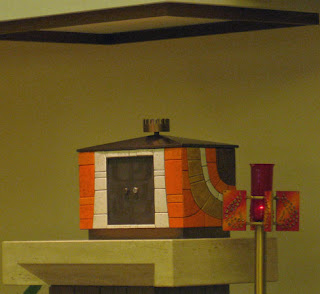 The Tabernacle and Sanctuary Lamp.

I wonder if the Sanctuary Lamp can fly...its got fins like a helicopter.. 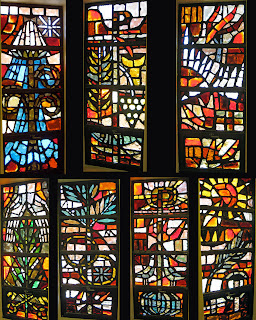 I know which Sacraments are missing...

I just don't know which window goes with which Sacrament.

Feel free to leave a guess in the Comment box!

Outside Stations of the Cross 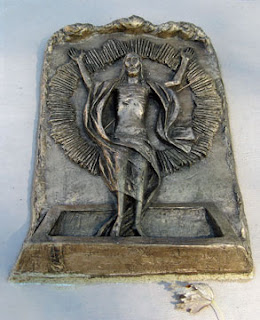 Close-up of the 15th Station

More about it: here.

Posted by Tina aka Snupnjake at 4:47 PM