Good Friday to you all!  In case you somehow missed the news, my dog Jake, is incredibly sick and is at the Veterinary Hospital at the University of Illinois-Urbana-Champaign.  I'm kind of at loose ends while I wait for Jake's operation.  Being the good Catholic I am, the best way to kill er occupy er an hour is to attend Mass.  Lucky for me, there was a 9 pm Thursday night Mass that I attended on December 3 on campus at the St. John's Chapel at the Catholic Newman Center at the University.

I have to be straight up.  I was expecting a Mass similar to the weekday Masses the Catholic Newman Center at University of Missouri-St. Louis. I was expecting 10 people and uber-casualness.  I mean it is a residential campus, I expected students in pjs.  So not what happened.

Barring St. Francis de Sales, this was the most reverent Mass I have ever attended.  The students were silent in Church before and after Mass.  Father was uber-reverent. The server (in cassock, surplice and DRESS SHOES!) was reverent.  The extra-ordinary ministers of Holy Communion were reverent.

The entrance and communion antiphons were recited.  For the Penitential Rite, we used option B. The intentions were read straight out of the Sacramentary.  The chalice was covered with a veil and a burse, which has a corporal inside.  There were bells.  The Holy Holy was chanted in LATIN!  Mass ended with the Prayer to St. Michael.  Afterwards you could hear Father and the server praying after Mass in the sacristry.

I really got the sense from Father that he really really believed in Transubstantiation.  After Communion, Father purified every vessel that was used.  And it wasn't the swish a little water in and you're good method either. Father cleaned his fingers, making sure to do so over the chalice so any crumbs were caught.  Father wiped down the patent multiple times over the chalice as well.  He thoroughly purified the chalices and ciborium.  After Mass, Father came out and inspected the floor where everyone had stood distributing Communion to make sure there were no crumbs or spills.

It was also the feast of St. Francis Xavier (relics) and Father mentioned our Catholic Identity in connection with it.

Sorry the images are so dark,

they didn't turn the lights on.

I really liked the angels holding it. 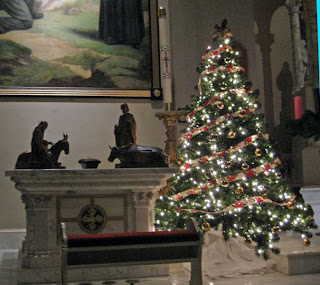 The Wise Men are on the other side.

I know some people would be upset to see this in Church already,

but given that is a University, which will be mostly vacant by

Christmas, it is understandable.

On the wall above the doors.

"I am with you all days even to the consummation of the world."