I was so excited that Santa Claus came, I woke up early and decided to go to Christmas Dawn Mass.  (This is such a lie, it was all I could do to get up.)  There are actually Masses held at 7 am and people go to them.  I'm stunned.

I'm not exactly sure what to say about this Mass, other than it was depressing.  Father, a Franciscan visiting from St. Anthony of Padua, was delightful and reverent, especially given that he walked with a cane.  He even wore a Christmas themed stole.  I'm just kind of shocked/stunned that there was no music at all.  I find it hard to believe that the congregation couldn't sing a carol or two.  Doesn't everyone know O Come All Ye Faithful or Silent Night without having a choir?  I felt bad for Father too, as he specifically instructed those that were able to genuflect during the Nicene Creed (and he managed) and only about 1/3 of the congregation did.  I realize not everyone is physically able to genuflect, but one can bow or give some other sign of reverence.  He also had to beg for an EMHC to help distribute Communion, which I thought was kind of sad.

The homily focused on "Why Am I Here?" as in why does one come to Mass?  Father connected this to the story of St. Francis and how he realized people didn't understand what it meant when we speak of the Word becoming Incarnate, so he came up with the idea of a Creche.  One day when he was preaching, the baby Jesus came alive.  Father then when on to discuss the Gospel from Midnight Mass, which was from Luke.  Luke sets his story in the socio-political context of the times.  There was no room for Jesus back then, is there still no room for Jesus today in our lives?

After Mass, a parishoner welcomed me and thanked me for visiting and Father was very nice when I asked what kind of Franciscan he is (There are three kinds: Regular, Capuchins, and Black Friars). 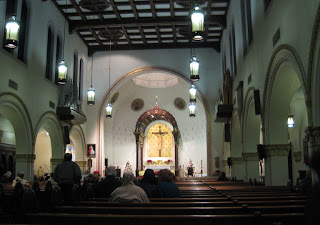 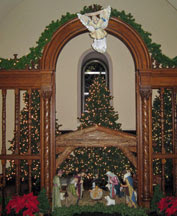 Mosaic in the Back 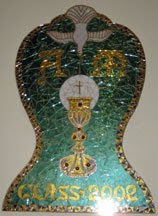 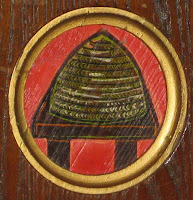 Each of the pews & in other hidden places, displayed different

I saw a variety of symbols, such as the Sacred Heart, a Ladder, Crown of Thorns...

With the Ten Commandments in the corner. 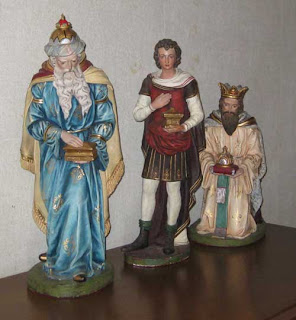 They are right inside the door, as they won't arrive until Epiphany.

Pictures from Rome of the West
FAQ about different Franciscans

Posted by Tina aka Snupnjake at 9:08 PM