Today (December 20) I went to 10 am Mass at Immaculate Conception in Park Hills.  Park Hills is an old lead mining area and is still relatively rural.  Since I was going to the middle of nowhere, I brought a friend (Mark from Rome of the West), because getting lost is always more fun with a friend.

Immaculate Conception is a modern church (built in 1958) and relatively sparsely decorated.  However the pews were padded, which I thought was something that only Protestants did, being that Catholics are all into suffering and offering it up and all.

As we found the church, there were many cars in the parking lot and we were afraid we had missed Mass.  (It took ~75 minutes to get there and frankly that would have sucked.)  Happily, there was a Cantata, the Christmas story told with music, and I heard some lovely singing by the choir from St. Joseph in Bonne Terre.  It was quite lovely.

The servers wore red cassocks and Father had a really nice purple chasuble.  The center was a brownish/goldish tapestry with crowns and such in it.  The Deacon's stole didn't match Father's chasuble but it did match the altar cloth.

The choir was in the loft and accompanied by an organ.  The music was:

Opening:  Gather Us In

Father started Mass with a prayer in front of the Advent Wreath and then lit the last purple candle.

Today's Responsorial Psalm was supposed to be Psalm 80:  Lord make us turn to You, Let Us see Your Face and be saved.  Instead the choir substituted Psalm 25:  To You, O Lord I lift up my soul.

The homily was given by the permanent deacon and was about peak moments in our lives and that Advent was a time to prepare for those peak moments.


The Prayers of the Faithful were social justice orientated.  I thought for a moment that we weren't going to prayer for the dead and the sick, but then Father gave a meta-intention that included legislators, the sick, the dead and vocations.

There was a little ad-libbing (my friends instead of my brothers and sisters) and I believe Eucharistic Prayer II was used.  There were bells at the Consecration. 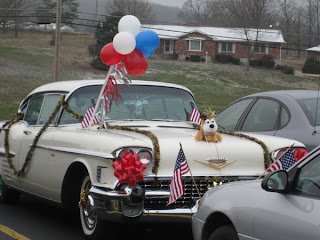 Found in the parking lot! 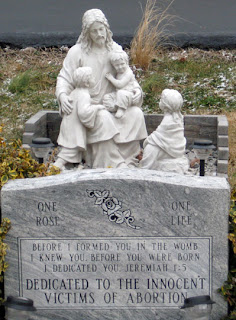 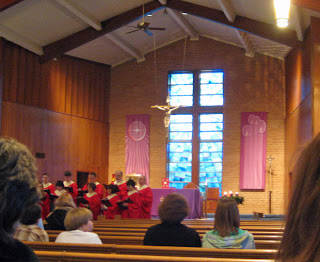 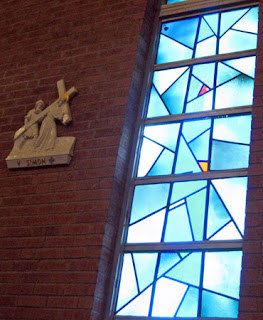 Simon Station of the Cross

I kept thinking it would make an interesting quilt.

I thought it was neat how the smoke was rising

after the candles were blown out. 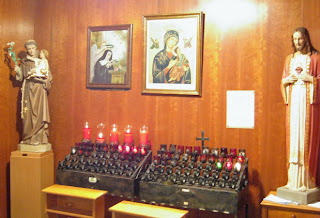 Shrine area in the back

Not sure who the nun is in the picture on the left.

She's standing on either a viking helmet

or the world with horns.

Links:
Immaculate Conception Bulletin
Photo from Rome of the West
Posted by Tina aka Snupnjake at 3:13 PM