Happy Feast of the Immaculate Conception!

Jake and I are back in St. Louis!  Since December is dedicated to the Immaculate Conception, I had planned to visit churches named Immaculate Conception.  However, with Jake being sick and all that plan has fallen apart.  Because of the time and location, I visited St. John, Apostle and Evangelist, which is located in downtown St. Louis across from City Hall and the Post Office.  Mass was at 12:10 pm.  It was pretty full given it was weekday.  Many of the attendees were nearby office workers and city employees, which would account for the mass exodus after Communion as many had to get back to work.

There was an organ in the choir loft.
The music for the day was Marian-themed:
Opening:  Immaculate Mary
Offertory:  Organ musics
Communion:  I Sing A Maid
Closing:  Hail Holy Queen

St. John is a very old church that underwent a renovation in the 1960s for its 100th anniversary. The windows are newer but many of the decorations seem original.  I noticed a bishop's arms on the ceiling and am know engaged in a quest to figure out who's they were.

The homily was about how Mary is all that we hope to be and aspire to.  She is the dawn of our salvation.  We are glory bound through Mary.

Eucharistic Prayer II was used and there were bells at the Consecration.

Father wore a chasuble that was off white with blue trim and a zipper (about 10 inches) in the front.

The parishioners were very friendly as well. 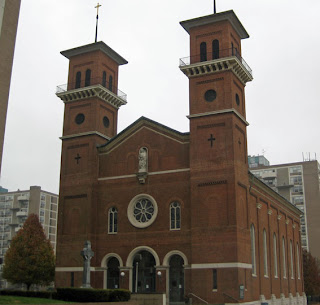 You can see it surrounded by high-rise apartment buildings 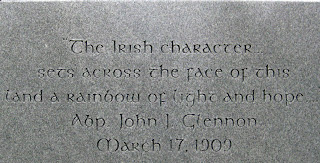 On the bottom of the Celtic Cross

I wonder when this cross was placed, as Archbishop Glennon later became 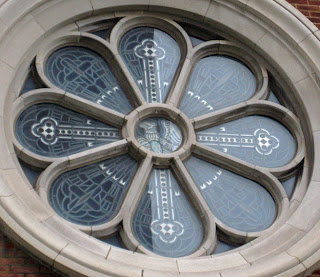 match the style of the other windows.

It features an eagle in the center, which often

is used to symbolize St. John. 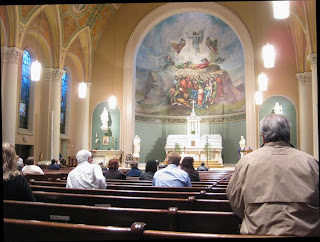 The painting is a reproduction of The Transfiguration by Raphael.

Where the plant is on the altar, under the cross in the pavilion like structure

is where the Monstrance goes for Adoration. 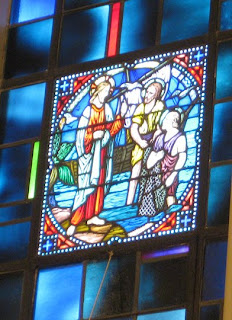 Jesus calling St. John to be an Apostle. 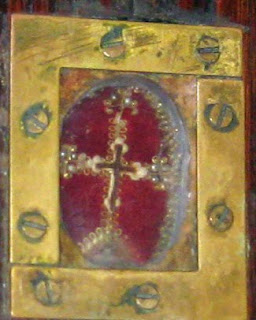 Relic of the Cross?

This was on the big crucifix on the back wall.

Pictures from Rome of the West:  Today and Christmas 2006 (the Baptismal Font is from St. Boniface, which was closed in 2005.  That's the font used to baptize your favorite heathen!)

Posted by Tina aka Snupnjake at 3:58 PM