Greetings all!
Jake, my precious little basset, is scheduled to be released from the hospital on Sunday morning at 8:30 am, so I went to Mass at 5 pm on Saturday, December 5.  I attended Mass at St. Patrick in Urbana, IL.

St. Patrick was built in 1901 and is an old style Church.  However, the interior and furnishings are modern, but with the original stained glass windows.  There were banners along the side.  The confessionals were gone and in their place were little shrine areas. The church was pea green on the inside.

The piano was upstairs in the choir loft.  There was a cantor who sang very nice.
Opening:  People Look East
Offertory: ?? was a solo.  A Voice Cries Out?
Communion:  I Sing A Maid
Closing:  Come Long Expected Jesus

The Advent Wreath had white candles with purple and rose ribbons around them.  There was no processional cross, but rather the sacramentry was carried in the procession.  Before Mass, all of the various ministers were introduced.  Father had a sparkly purple koi on the front of his vestment.

The homily was about John the Baptist preparing the way.

During the Our Father, everyone held hands (but me) and at the response people raised their hands up.  This just drives me bonkers, BTW.  I'm fine with the adlibbing, puppets, dancing and other liturgical shenanigans but raising your hands up like the Protestants just makes me roll my eyes.

The Lamb of God was about Jesse Tree and how Jesus was a branch and should have mercy on us.  Father's chalice was covered with a chalice veil.  It was blue-green and looked like a pillar candle holder.

No consecration bells, but an extra blessing at the end.

OH! A view from the back pew first!  A parishioner questioned me after Mass as to why I was taking pictures and notes.  I really wanted to tell her I was writing to the Vatican but I was good and just said "because." 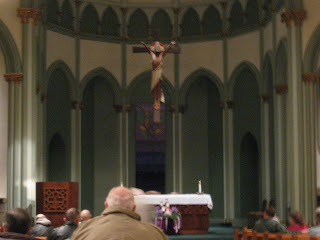 Sorry it's blurry.  I even used the tripod

It was just dark.

Oh and that is the Jesus escaping Crucifix 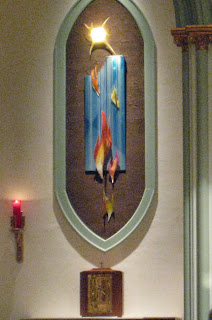 Veronica Wipes the Face of Jesus

This was the only station I could definitively identify. 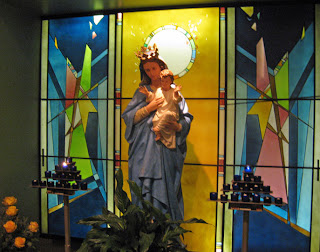 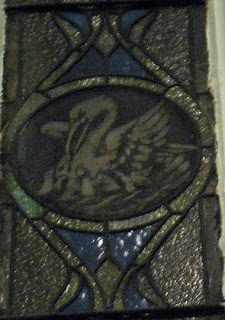 The narrow windows between the saint windows

(scroll down at the link for a bit for the pelican)