For the Christmas Eve Vigil, I decided to go to the 6 pm at Immaculate Conception in Maplewood. Immaculate Conception-Maplewood was built early in the 1900s and is a lovely old church. I wish I could have gone during the day to see the windows, which look to be original. For awhile, the Missionaries of Our Lady of La Salette administered the parish, but currently the parish is administered by the Archdiocese.

Before Mass there was some carols sung by the choir and the children were invited to sing a few songs. The Creche was blessed (minus incense or Holy Water) before Mass. The children, with candles, then processed in with Father.

The music was accompanied by either the organ, guitar or piano depending on what was being sung. The choir, except for the organist, was in the front of church in the sanctuary, instead of the choir loft.

Gloria: Mass of Light (aka Sing Glory to God)

Preparation of the Gifts: The First Nowell (Hey that's how Breaking Bread spells it)

Communion: Silent Night in English and in Malagasy to show solidarity with the La Salette Missionaries in Madagascar

Song of Praise and Thanksgiving: Who Has Known...

Recessional: Joy to the World

The homily was interesting, all be it a bit on the long side, almost two homilies joined into one. Father spoke about how we've done all this preparation and then we are given tonight's Gospel reading, which is Jesus' genealogy from the Gospel of Matthew. The point of this list is to remember that God always fulfills his promises and that we will be redeemed. This is the foundation of our joy. Father then went on to discuss four foundations, or pillars, that were discussed during Advent which helps us to be prepared for God. These pillars are prayer, repentance, charity and service. Without these things, we will not know God or be able to recognize Him in this world.

It was different that a family performed the collection duties, in that this involved 2 kids under 12. Additionally, one of the ushers wore 5" heels, which must have been tough.

Father prayed Eucharistic Prayer 1 (but left out all the saints). There were no Consecration bells. At the beginning of the Doxology (Through Him and With Him...) the parish stood and remained standing until Communion. It is usually customary to stand after the Great Amen and then kneel again after the Lord I am not worthy to receive You response.

After Communion, a group of children did a prayer movement during the Song of Praise and Thanksgiving. A few people walked out at this point. I'm not sure what the point of this was but here's a video of it:

Father did give an extra blessing today. 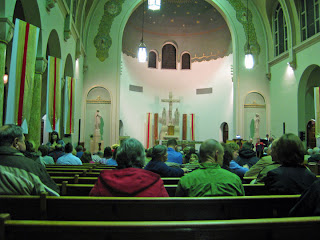 Sorry the Images are green.

Update:  Mark from Rome of the West informs me that having my camera on the
wrong light setting will get me green pictures. 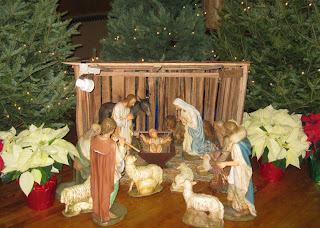 (Which was in the back of Church) 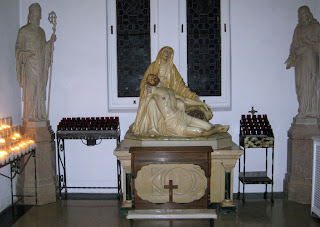 A little side Chapel

St. Boniface used to have a similar statue.

It looks as if St. Ann is teaching Mary. 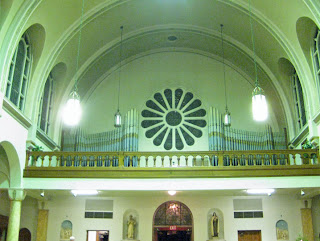 View from the Sanctuary.

The Organ Pipes are painted blue! 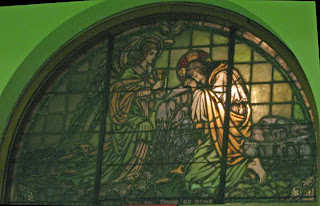 The bottom says "Not My Will, But Thine Be Done"

Sorry for the green. I don't know how to fix it. 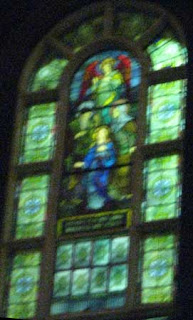 This is a window taken from the outside,

so the Church lights are illuminating it.

It looks like Mary and an Angel, maybe Michael.

Sorry it is blurry, it was really windy and even using my tripod...

Posted by Tina aka Snupnjake at 8:45 PM