REJOICE!
Today is the third Sunday in Advent, known as Gaudete Sunday.

Music was provided by a guitarist who was up in the choir loft.
The music was:
Opening:  Alleluia! Hurry, the Lord is near.
Offertory:  A Voice Cries Out
Communion:  Jesus Come to Us and Holy Spirit
Recessional:  Every Valley

Immaculate Conception is a nice Church.  I like this style as in old school architecture, but simple on the inside, except with nice stained glass windows.    It seems to be more a working class parish, with many people in casual dress.  There were the usual late comers and there was a mad rush after the priest processed to vacate the Church.  People were processing out with Father.

The homily was really long.  It almost seemed like three homilies jammed together.  Father started talking about St. John the Baptist then moved on to the differences in how fire was portrayed in the Old Testament and the New Testament.  In the Old Testament, fire is punishment, while in the New Testament, fire symbolizes a cleansing from sin or repentance.  Then Father moved on to telling us that we can be like John the Baptist to those that have fallen away from the Catholic Church.  This was the shortest part of the homily and I thought it was the most interesting and would have liked to hear more about it.

The Eucharistic Prayer was Eucharistic Prayer II and there were no bells at the Consecration.  Many in the parish lifted their hands during the Our Father.  The phrases sung during the Lamb of God were Wisdom and Mighty Lord, True Branch of Jesse's Tree and Desire of Nations, Our Emmanuel.  These phrases refer to the O Antiphons, better known as the verses from O Come O Come Emmanuel.

Oh! Nearly forgot!  Extra blessings at the end of Mass!

Just a note:  giving your family members massages during Mass is probably inappropriate. 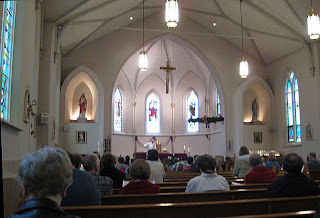 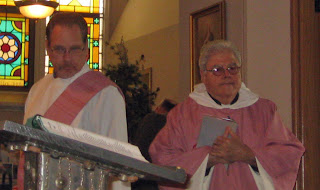 Father and Deacon are in ROSE vestments!  WOOT!!

FYI:  Father is actually a Dominican, that is why there

is the hoodie (his habit) sticking out of the vestments. 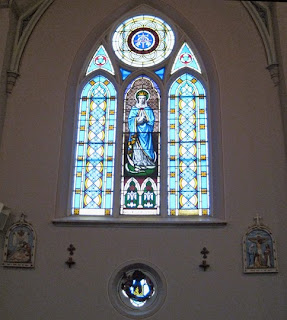 With what I'm guessing are Consecration Crosses, which are used

in the consecration of a Church. 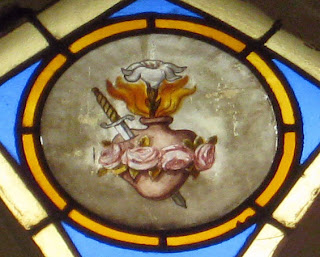 Inset of one of the windows 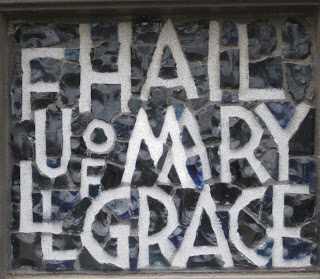 Mosaic on the outside of the Church 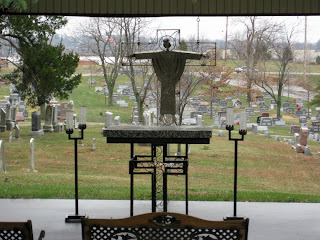 Chapel of the Three Marys

The parish has a cemetery and this is a little chapel in the cemetery.

That is a real altar, with an altar stone. 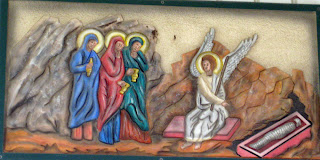 Posted by Tina aka Snupnjake at 4:02 PM