Merry Christmas again!
I couldn't sleep last night, so full of excitement I was, so I went to Midnight Mass at St. Mark in Affton.  St. Mark is a relatively new parish that was created by merging St. Timothy (owned by the Salvation Army), Mary, Queen of the Universe (where the school for St. Mark is located.) and Most Precious Blood.  The new parish is at what used to be a Benedictine Monastery and is now the parish and the Blessed John XXIII Center for the St. Louis Archdiocese.

The set up inside is just odd.  The Church is much longer than it is wide.  Instead of having the altar at an end, the altar was in the middle of a long side, with the pews arranged in a semi-circle.

Before Mass, there were carols sung by the choir and they were lovely.  The music at Mass was accompanied by an organ, with the choir to the right of the Sanctuary.  I'm not sure there is a choir loft.  There were some grills and windows at a second level, but I don't know what they were.

The music for the night:
Opening:  O Come All Ye Faithful
Offertory:  Silent Night (in English and German)
Communion:  Angels We Have Heard on High and O Little Town of Bethelhem
Recessional:  Joy to the World

Mass was very nice and reverent.  The deacon was incredibly reverent.  The crib was blessed with incense and water.  Incense was used through out the Mass.  After the crib was blessed, Adeste Fidelis was sung (O Come All Ye Faithful in Latin).  The Gloria was to the tune of Angels We Have Heard on High.  However, the Proclamation of the Birth of Christ was skipped.

The homily was interesting.  Father started talking about Weddings.  I thought for a minute he had lost it, it being so late.  The point was that when a couple comes to him for the Sacrament, they come "To Make it Holy"  That is the point of Christmas and Christ's Birth:  To Make It Holy.

Before the Nicene Creed (Links to Godzdogz, who go through it phrase by phrase for a total of 46 posts, the last being it chanted Dominican style),  Father said because it was Christmas, when we get to the part in the Creed about the Word being made Incarnate, we were all to genuflect.

Father used Eucharistic Prayer I and there will bells.  The second collection for the seminary was skipped... 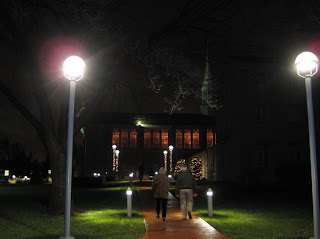 The view of Church as I walked from the Parking Lot. 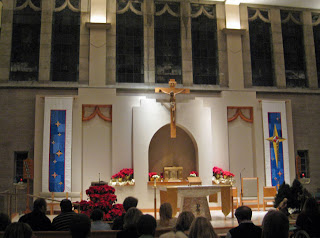 View from one back pew! 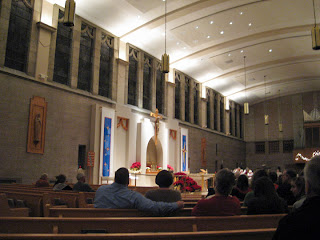 View from the Back Pew I sat in.

Wreaths are hanging from them. 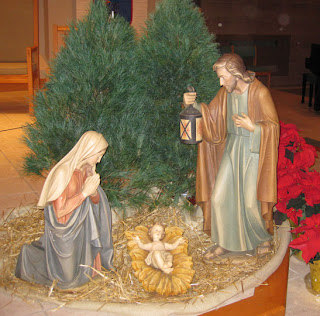 St. Mark, with his symbol, the Lion 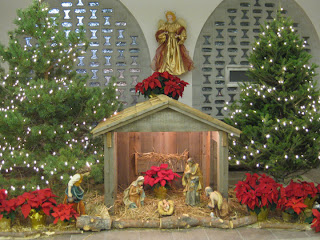 Posted by Tina aka Snupnjake at 7:06 PM