This morning I headed out to one of the newest parishes in the Archdiocese, St. Gianna, which was founded in 2006.

As what I'm guessing is a first church, it's really quite nice. It's square shaped and linear. The windows are from a closed church as they are not the current style and resemble older windows.  I suspect the windows came from St. Philip Neri as that was the only saint window.  There's no choir loft.  The organ was in the front.  Given all the housing construction that is going on around the building, I'm not sure it is going to be big enough in 10 years.

The parishoners were relatively well dressed.  Father had lace on his cuffs and hems.  Bendictine altar arrangement, altar boys in correctly fitting cassocks and surpluses, patens, genuflecting people, bells, ah then Eucharistic Prayer II and hand holding at the Our Father.  I was worried for a moment.

Before Mass there was a Litany of some sort being prayed.

There was a choir to sing the music today.  I only knew 1 hymn today.
Opening:  Faith of Our Fathers
Mass Setting:  Chant Mass in Honor of St. Ralph Sherwin (WHO??...by the date 1581 and name, an English martyr?..ah indeed one of the 40 English Martyrs)
Offertory:  Come Christians Joined to Sing
Communion:  Set Your Hearts on the Higher Gifts, A New Commandment
Closing:  There's a Wideness in God's Mercy

Father's homily was interesting as it is one of the things I've been pondering as I get ready to announce my parish decision.
Moses recognized that God gave Israelites something no other country had previously.  God's Law.  They were God's chosen people governed by law; God's law.  Unlike other countries where the people were subject to the whims of a ruler. The law applied to people and to rulers (unless of course, they made laws that excluded themselves from laws...).  These laws were good and just because it was God's Laws (wonders what God would come up with if he had to do like Affordable Health Care Act...).  These laws (10 Commandments) are written on our hearts.  They have been discovered without Divine Revelation by people.  Moses told the Israelites they would be revered because of it.  God is closest to us.  This is just.  The Teaching of Jesus and the Church is not just to obey a bunch of rules.  The purpose is to lead us to God and the right way to live.  It is the surest path to guide us to Him and heaven.  Pharisees didn't understand the true purpose of the law or they ignored it to suit their needs and wants.  They followed the letter but not the true meaning of the law.  It is for the conversion of hearts.  The Pharisees honored with lips but the heart was from God.  They disregarded God's commandments but clung to human tradition.  The Catholic Church believes both Sacred Scripture and Sacred Tradition.  But Jesus denounced tradition.  Remember words have different meaning depending on the context (or the translation, or someone's agenda).  In the Reading from St. Paul, he talks about the tradition being the Doctrine of Faith and in this instance Tradition is good.  There are two ways:  by preaching, which is Sacred Tradition, and by letter, which is Sacred Scripture.  We need both guided under the teaching authority of the Church.  Many people think they don't need Church as Church gets in the way of their relationship with God and Jesus.  They can just read the Bible. They are just spiritual.  The Church doesn't get in the way.  The Church is hierarchical with everyone having a mission and a vocation.  The purpose of the priesthood is to serve the people.  (Uh....uh...) The Pope is called the Servant of Servants of God.  How would you learn if you didn't have the Church (Google and Wikipedia).  People who read the Bible have the tendency to fall into heresy (I knew there was a reason I never read the Bible)  We come to the Bible with preconceived notions.  Sacraments take material things as sacred symbols.  Spiritual and material.  The Jews did not do all those things for cleanliness sake but as a way to get ready for God.  Sins come from within.  That is what defiles us.  It is the heart that is to be converted.  We can be tempted like the Pharisees.  We can fool others and our selves but not God.  Natural moral law is to convert the heart.  Tradition, Scripture and Sacraments are a sure path to reach Him and heaven.

After the petitions, there was a prayer for religious liberty. 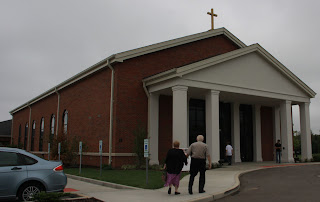 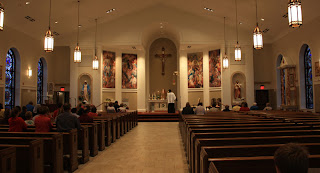 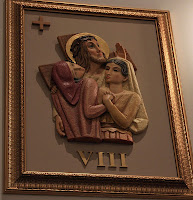 Did you figure out the theme of the windows?

Link:
Website of St. Gianna
Posted by Tina aka Snupnjake at 6:53 PM